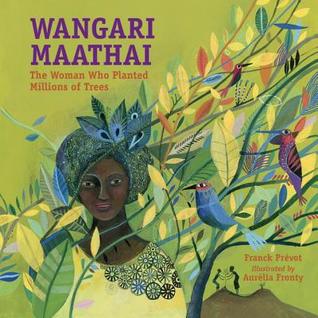 Summary:  While other picture book biographies about Wangari Maathi have focused on her tree planting, this book takes a broader look at her political activism.  She was fortunate to get a high school education in Kenya at a time when most girls didn’t go to school at all, and did so well that she was part of a group selected by President Kennedy to study in America.  Upon her return to Kenya, she observed how ravaged the land was from deforestation, and began her work to plant trees.  This work was in opposition to some of the plans of President Daniel arap Moi, and Maathai was imprisoned more than once.  In 2002, Moi was defeated, and Wangari Maathai was appointed assistant minister of the environment, natural resources, and wildlife.  In 2004, she was awarded the Nobel Peace Prize.  She died in 2011 at the age of 71.  End pages include an extensive timeline, information on Kenya today, quotes from Wangari Maathi, and further resources.  Grades 2-6.

Pros:  This French import is more extensive than other Maathi biographies, and would be appropriate for an older audience looking for more in-depth information.  The illustrations are striking, each one painted against a boldly colored background that fills the whole page.

Cons:  This is the fifth picture book biography of Wangari Maathi published since 2008, so some libraries may pass on purchasing this one, which would be too bad.

One thought on “Wangari Maathi: The Woman Who Planted Millions of Trees by Franck Prevot, illustrated by Aurelia Fronty”