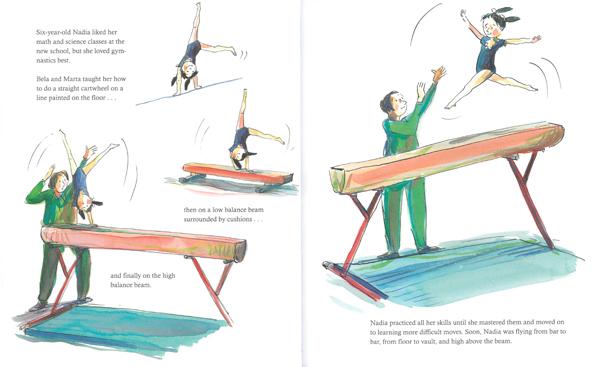 Summary: Readers of a certain age will remember Romanian gymnast Nadia Comaneci,  one of the stars of the 1976 Summer Olympics. This picture book looks at Nadia’s life leading up to those Olympic performances. From an early age, Nadia was a daredevil, and her high energy level led her parents to enroll her in gymnastics. She was spotted by now-legendary coach Bela Karolyi who recruited Nadia to join the new gymnastics school he had opened with his wife Marta. Motivated by a disappointing performance at her first National Junior Championship, Nadia worked hard for many hours a day to make it to the Montreal Olympics when she was only 14. There she became the first female gymnast to earn a perfect 10…and went on to earn six more! The book ends there, but an afterword and timeline give more information about Nadia’s performance in the 1980 Olympics and her defection from Romania in 1989. 40 pages; Grades K-4.

Pros: An inspiring story of an amazing athlete, perfect for summer reading during this year’s Olympics. Nadia always seemed to me to be more serious than her predecessor Olga Korbut, but she comes across as ebullient and energetic in the illustrations here.

Cons: Because of the brevity of the story, making it to the Olympics comes across as about as difficult as snagging a spot on the high school gymnastics team.