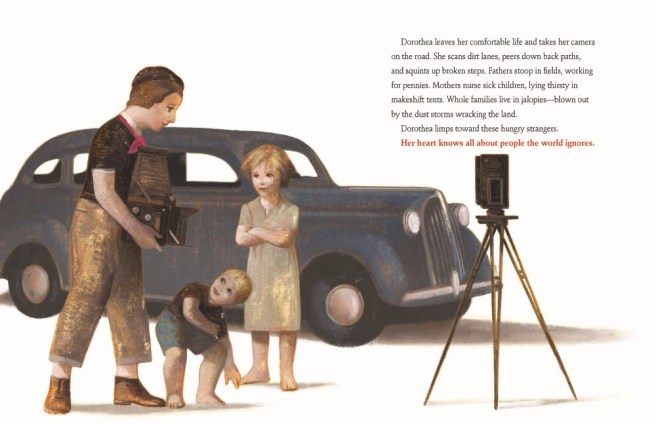 Summary:  Young Dorothea was a keen observer, often feeling like an outsider after a childhood bout of polio left her with a limp.  At the age of 18 she decided to become a photographer, even though she had never handled a camera.  She worked in a number of studios, first in New York, then in California, where she learned the art of taking pictures, eventually setting up her own portrait studio in San Francisco.  But she felt unfulfilled taking photos of wealthy people.  In the midst of the Great Depression, she took to the streets, photographing the poor and neglected, traveling across the country, and waking people up to the poverty that was sweeping the nation.  Although she was plagued with ill health for many years, Dorothea continued to be a crusader with her camera, both in the United States and abroad.  End matter includes several of Lange’s photographs, an author’s note, a timeline, and resources for further research.  40 pages; grades 1-5.

Pros:  An interesting biography of an inspiring woman who followed her heart to do work that made a difference.  The unique illustrations have an appropriately vintage feel to them.

Cons:  I really liked Dorothea Lange’s quote on the bibliography page.  Too bad it couldn’t have been worked into the text.