Published by Little, Brown, and Company 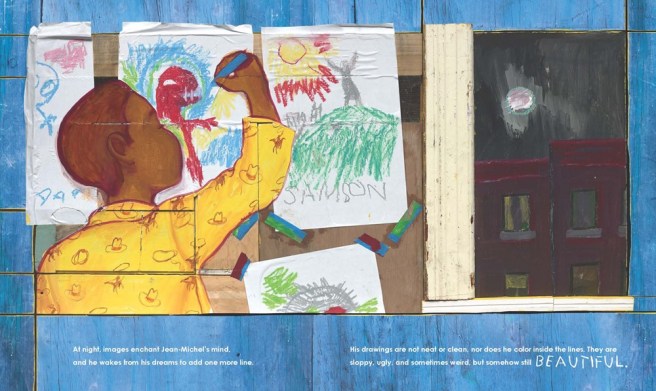 Summary:  Jean-Michel Basquiat grew up in Brooklyn with a mother from Puerto Rico and a father from Haiti.  His childhood was filled with art, both his own works and what he saw around him.  His mother was artistic and regularly took him to art museums.  There were also difficult times for Jean-Michel.  He was in a serious car accident at the age of eight, and spent months recovering.  During that time, his mother brought him a copy of Gray’s Anatomy, which helped him learn to draw the human figure.  A few years later, his mother’s mental illness drove her to leave the family.  Jean-Michel left school and moved to New York City, where he continued to pursue his art in a number of unconventional mediums, including graffiti.  He lived his dream of being a famous artist until his tragic death in 1988 at the age of 27 from a heroin overdose. An author’s note gives more biographical information. 40 pages; grades 1-5.

Pros:  The story of Basquiat’s life is told in brief, lyrical text, illustrated with beautiful collages inspired by the artist’s work.  The artwork is sure to receive some Caldecott consideration.

Cons:  There are some pretty adult topics covered in this book targeted for elementary students.  Also Basquiat’s work isn’t included anywhere in the book.