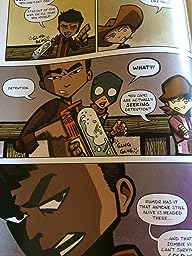 Summary:  Bryce and his partners Yoshi and Clinton battle zombies, cooties, and pirates during their recess time on the school playground.  The first few pages show a map of the various yards at the school and portraits of the main characters.  Different characters control different yards.  In the first part of the book, the heroes battle a cooties outbreak that causes kids to turn into zombies.  They finally get that taken care of, then the action shifts to a pirate ship where Bryce and Clinton are held captive.  When the pirate captain reveals herself, though, she also discloses that she was responsible for the cooties outbreak.  There’s a climactic battle which results in a shift in leadership and opens the way for book 2.  144 pages; grades 2-5.

Pros:  Fans of Bone, Amulet, and Doug TenNapel graphic novels will enjoy this new action adventure series in a world populated only by kids.

Cons:  I found the line between what was real and what was in the kids’ imaginations a little confusing, especially in the zombie sequence.