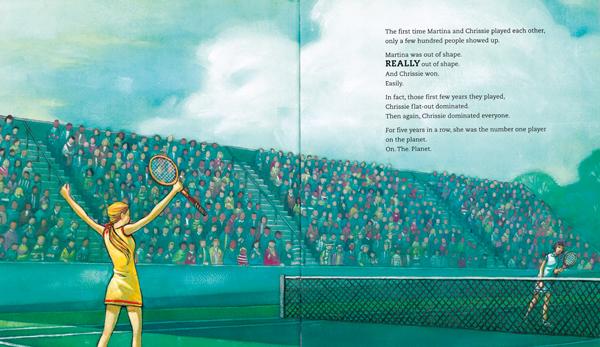 Summary:  During the 1970’s and 1980’s, women’s tennis was dominated by Chris Evert and Martina Navratilova.  Although they were staunch competitors and from countries that were engaged in a cold war (the U.S. and Soviet Union-controlled Czechoslovakia), the two were friends off the court and remain so to this day.  In the early years, Chrissie won the most; then Martina got more serious, and was ultimately victorious more times over the course of their careers.  But the important takeaway from their rivalry isn’t winning or losing, but how each one pushed and encouraged the other to be a better player and a better person.  Includes a three-page annotated timeline, a paragraph about both women’s lives after tennis, and a page of sources.  40 pages; grades 1-5.

Pros:  The fast-paced, chatty writing will engage readers who may have never heard of these two tennis superstars from a generation ago.  Lessons on hard work and good sportsmanship can effortlessly be extracted from their story.  And don’t worry, Series of Unfortunate Events illustrator Helquist has rendered both players more Violet Baudelaire than Count Olaf.

Cons:  “The Greatest Rivalry in the History of Sports” is arguably a bit of an overstatement.