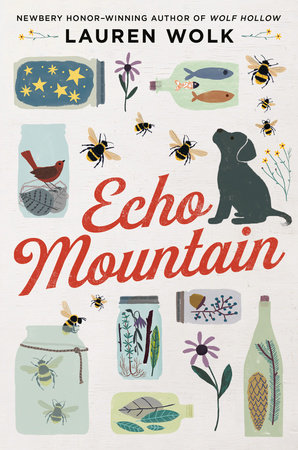 Summary:  Ellie’s family has moved to a farm on a mountain in Maine after losing almost all their money in the Great Depression.  Ellie and her father love the self-sufficiency of the farm, while her mother and older sister Esther hate it.  When their father is hit by a falling tree and lapses into a coma, it falls on Ellie to do much of the work he did.  Feeling alone, she wanders up the mountain to the home of a legendary “hag”, who turns out to be an ordinary old woman named Cate with a life-threatening leg injury.  Ellie learns some occasionally stomach-turning healing techniques (maggots, vinegar poured into the wound) from Cate as she works to save her.  Cate’s grandson, Larkin, becomes a good friend, and Ellie is finally able to tell someone her secret: she didn’t cause her father’s accident, as her family thinks, but she’s letting them believe it to protect Esther and her younger brother Samuel.  While Ellie’s mother is suspicious of Cate, Ellie finds her friendship with the older woman and her grandson a lifeline, and is certain they can help wake up her father and restore him to health.  368 pages; grades 4-8.

Pros:  Lauren Wolk has crafted another beautifully written historical fiction novel featuring a strong girl protagonist with a unique perspective and set of talents.  This is sure to be considered for a second Newbery (like Wolf Hollow) or Scott O’Dell award for historical fiction (like Beyond the Blue Sea)

Cons:  Usually I am a big Lauren Wolk fan, but this one didn’t grab me as much as her previous two.  I found Cate, with her endless store of sage wisdom, a little too good to be true.  It’s gotten starred reviews in journals and lots of 5-starred ones on Amazon, though so clearly I’m in the minority.