Published by Little, Brown, and Co. 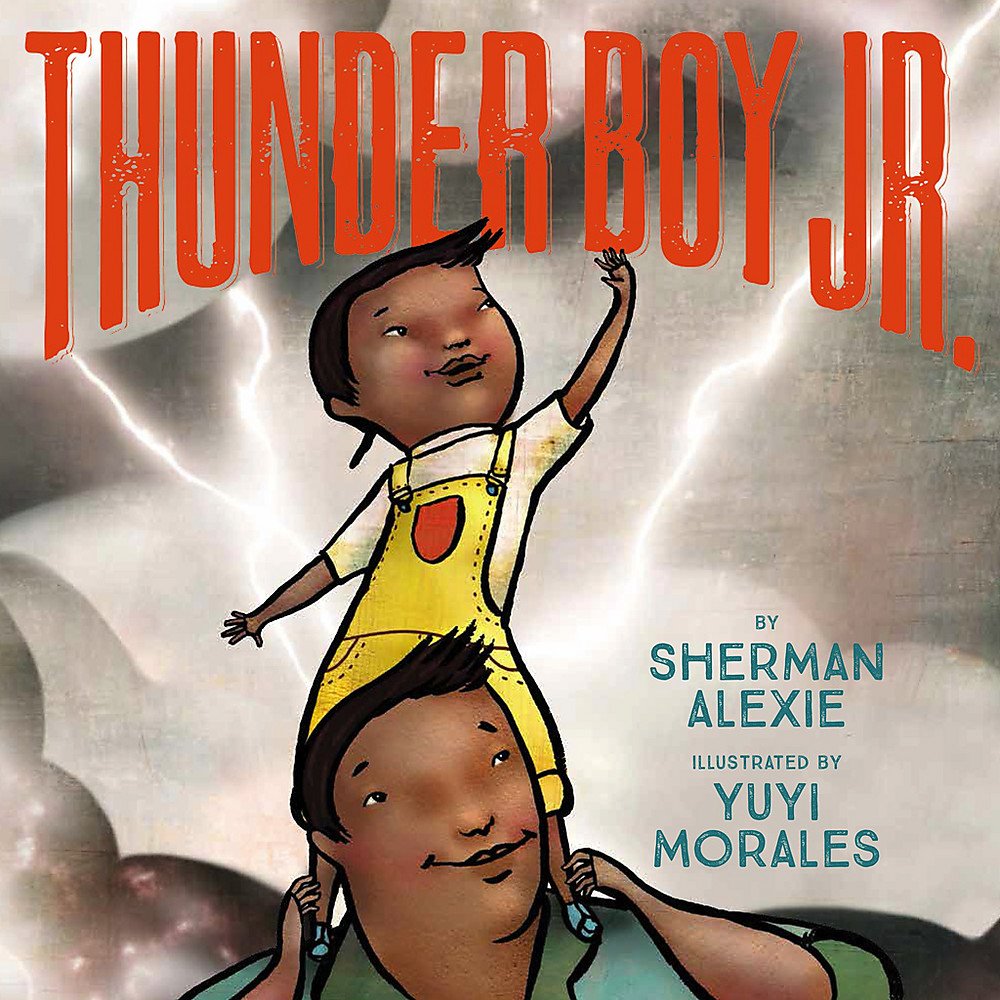 Summary:   Thunder Boy, Jr. has a secret.  He hates his name.  He’s named after his father, and he wants his own name, preferably one that celebrates something cool he’s done like Touch the Clouds for the time he climbed a mountain or Gravity’s Best Friend for his bike-riding skills.  While he’s trying to figure out how to tell his father that he wants a new name, Dad comes along and suggests that from now on he be called Lightning.  Delighted, Lightning goes off with Thunder Boy, Senior to light up the sky.  40 pages; ages 3-7.

Pros:  Plenty of humor and Yuyi Morales’ lively illustrations recount a problem other kids may relate to, not liking your name.  The names and the illustrations suggest a Native American family, a welcome addition to the multicultural bookshelf..

Cons:  The ending was a bit of an anticlimax.  Also, be aware the story contains the f-word.  (Fart, that is.)

Summary:  11 athletes in different sports are profiled.  Each one had a very difficult childhood.  Tim Howard was diagnosed with OCD and Tourette’s at age 10; Dwayne Wade grew up in poverty with a drug-addicted mother; coach Jacques Demers was so traumatized by his abusive father that he never learned to read or write.  Yet each one made a decision at some point to work hard and stay positive, and this led to a successful and lucrative sports career.  An afterword explains how the author came to write the book, inspired and assisted by his two sons.  256 pages; grades 3-7.

Pros:  The stories are fast-paced and fun to read, as well as extremely inspiring.  The trials that each athlete faced are pretty severe, yet their positive attitudes and hard work are the common threads running through each narrative.

Cons:  Only one woman was profiled, Althea Gibson whose career was in the 1950’s, unlike the more contemporary male athletes.  Also, there were no pictures.

Summary:  A boy describes each step involved in taking a trip on an airplane.  He starts at home with packing, using the second person voice (“You drive on the highway to where the ground is really flat.”), then moves on to the different steps of checking in and boarding.  The trip is briefly described, followed by what happens once the plane lands.  Woven through the story is a subplot about the boy’s younger sister’s missing stuffed monkey.  The busy illustrations show different people making their own trips, complete with cartoon-bubble dialogue.  The final page shows the happy family driving with Grandma and Grandpa past palm tree-lined beaches under a hot sun.  40 pages; ages 4-8.

Pros:  A fun book for the first-time flyer to learn what to expect, as well as for the seasoned traveler to recognize different parts of the airport and plane.  The illustrations and monkey story add plenty of humor.

Cons:  Take-off and landing which, in my opinion, are the most disconcerting part of air travel, are not described at all. 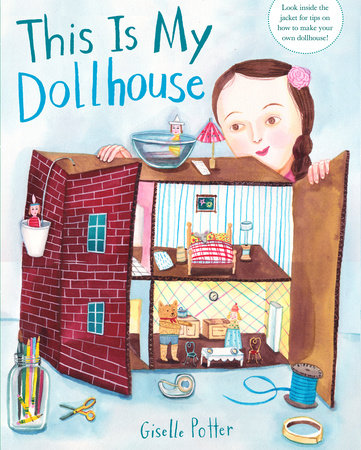 Summary:  The narrator starts out by taking the reader on a tour of her handmade dollhouse.  Formerly a cardboard box, the house now is furnished with homemade furniture, rugs, and wallpaper.  The family that lives there is composed of human dolls, except for Dad, who is a bear, and Grandma, a mouse.  On the other hand, her friend Sophie has a “real” dollhouse, which arrived already furnished and inhabited by a slightly more conventional family.  The only problem is, the girls are bored playing with it. When they go to the narrator’s house, she’s a little nervous about showing Sophie her homemade dollhouse, but Sophie quickly enters into the spirit of imagination, and their play date flies by in no time.  The last pages finds Sophie making plans for a return visit, and the narrator gazing proudly at her dollhouse.  40 pages; grades K-3.

Pros:  A wonderful celebration of imaginary play and the joys of creating it yourself.

Cons:  Kids, don’t be discouraged if your dollhouse and furniture don’t turn out quite as perfectly as the one pictured here.

Summary:  “Real Recipes Included!” boasts the front cover, but don’t head to the kitchen just yet: these recipes are for such treats as Predator Popsicles (bones and blood are involved) and Flamingo Chick Formula (simulating regurgitated fish).  As you may have guessed, the focus of this book is feeding animals at the zoo.  In addition to the recipes, it includes lots of information about zoo animals, how and what animals eat, profiles of zoo nutritionists, and tips for how kids can help animals, both inside and outside of the zoo.  Glossary and index are included.  40 pages; grades 1-5.

Pros:  Lots of information with plenty of humor, both in the writing and the illustrations.  The text is presented in (appropriately) bite-sized chunks, with lots of side bars and captioned illustrations.  The illustrations are a nicely goofy mix of photos and paintings.  Animal lovers of all reading levels will enjoy browsing and learn quite a bit in the process.

Cons:  “Tiger’s Birthday Cupcake” may have permanently put me off of cupcakes.

Summary:  Gabe, Laura, and Cesar call themselves The Data Set because they collect enough data—random information—to stump even their teachers.  One day they’re on a mission to sell enough candy bars in their neighborhood to fund their science club’s field trip.  Knocking on doors, they eventually get to a strange-looking house that turns out to be inhabited by Dr. Bunsen, a kindly mad scientist.  He introduces them to his growth ray machine, which turns out to not only cause their little plastic animals to grow, but also brings them to life.  The animals start out as mini pets that fit into a terrarium, but rapidly begin to grow to full size.  The kids must put their heads together to figure out how to find a safe home for their new pets.  The zoo animals prove to be manageable, but the fast-growing stegosaurus presents a problem to be solved in book #2.  128 pages; grades 1-3.

Pros:  This face-paced humorous adventure is a perfect first chapter book, with a large font and plenty of illustrations on just about every page.

Cons:  The Data Set didn’t seem all that brainy…everyone gasped with amazement when Cesar came up with the idea to take the growing wild animals to the zoo.

Summary:  Simple but fun activities for learning math are arranged by season, with an emphasis on getting outdoors.  Measure worms in spring, count clouds in summer, play pick-up sticks in fall, and make snow shapes in winter.  Each listing begins with materials needed, which are all either objects that are found outside or simple household items.  Explanations of addition, subtraction, multiplication, and division are given at the end.  Includes an index of activities, arranged by mathematical concept.  26 pages; grades PreK-3.

Pros:  This Swedish import makes learning math fun and healthy.  The activities are simple enough for preschoolers to enjoy, but include mathematical concepts that are covered through the primary grades.

Cons:  You’d have to live in a four-seasons climate to do everything.

Summary:  World War II is raging, and Diana Hopkins, the 10-year-old daughter of Presidential advisor Harry Hopkins wants to do her part.  Spying and trying to scare off enemies by sticking pins in the couch don’t work out too well, but she’s delighted when she overhears her father and Franklin Roosevelt talking about a new plan to encourage Americans to grow victory gardens.  The first demonstration garden is to be planted right on the White House lawn.  Diana teams up with First Lady Eleanor Roosevelt to create it.  Before long, Diana is outside watering and weeding almost every day, and even gets her picture in the paper, standing in front of her thriving Victory Garden.  On the last page, the Hopkinses and the Roosevelts sit down to a feast that includes beans, carrots, lettuce, and tomatoes from the new garden.  Notes from both the author and illustrator give a bit more information about Diana Hopkins and Victory Gardens, and the research that went into the creation of the book.  44 pages; grades K-4.

Pros:  A nice bit of World War II historical fiction.  Diana is a likeable character, with both a mischievous side and an admirable desire to contribute to the war effort.  My mother, just a bit younger than Diana in 1940, would love this book.

Cons:  Diana’s life looks like it was a lot sadder than portrayed in this book…her mother died before this story takes place and her father, just a few years after.

Summary:  10-year-old Charlotte lives in England in 1940.  She and her best friend Kitty love to hear Charlotte’s father talk about the work he does researching time travel.  As World War II intensifies, his work becomes more and more secretive, until one night Charlotte and Kitty are kidnapped by Nazis and taken to her father’s lab.  The Nazis threaten to shoot the two girls if her father doesn’t tell them the secrets of time travel.  At the last second, much to her amazement, Charlotte sees a time-travel portal like her father has described to her many times before.  She runs through it, and finds herself in 2013 Wisconsin.  Knowing she can never travel back to her original time, she does the best she can to make a new life for herself, but she never forgets about Kitty.  Just when she has given up all hope of ever finding her, she opens a library book and finds a postcard from an adult Kitty, which just might be the clue she needs to reconnect.  272 pages; grades 4-7.

Cons:  Be prepared to suspend some disbelief for the time travel portions of the story.. 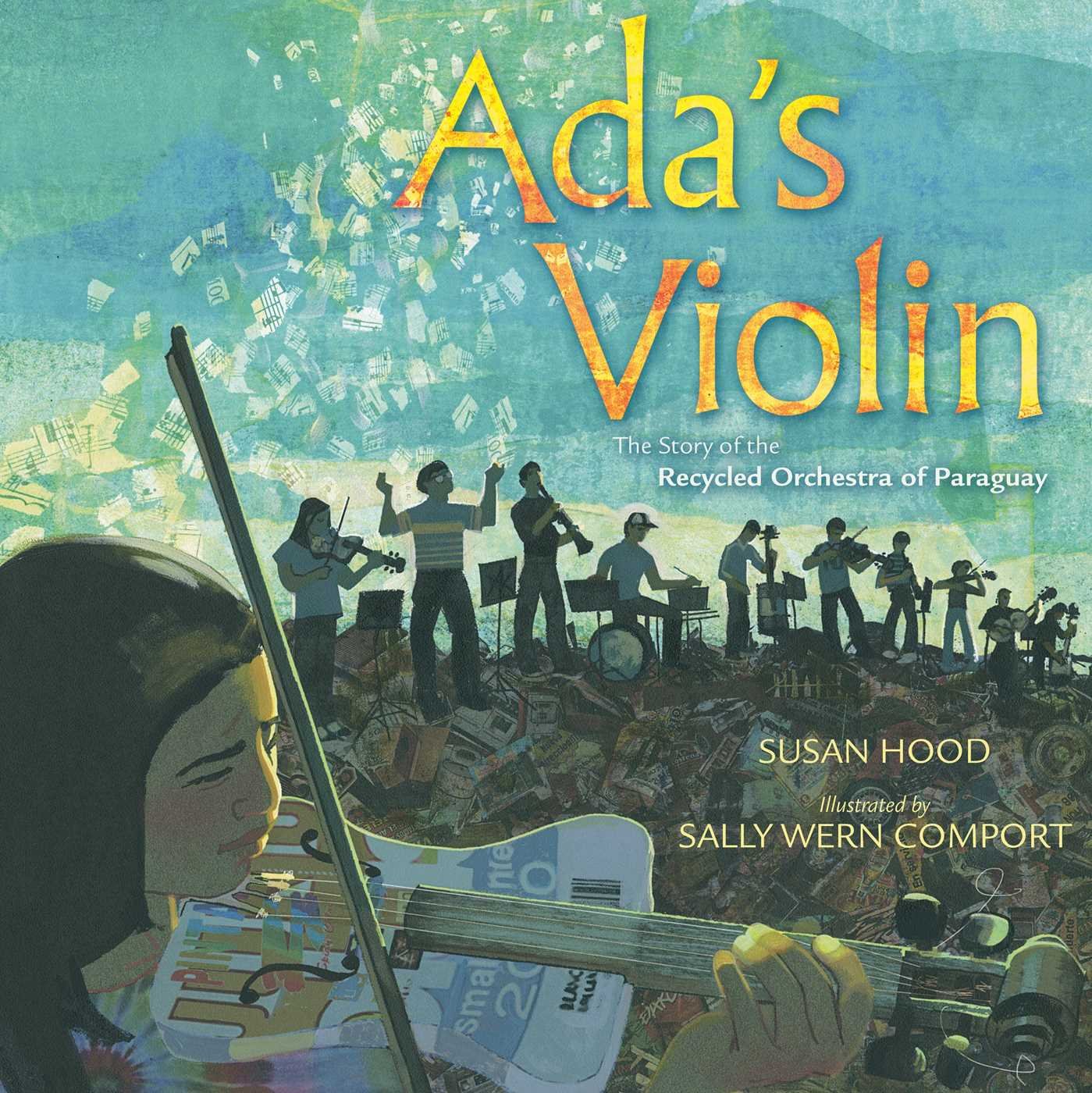 Summary:  Ada lived in one of the poorest places on earth, Cateura, Paraguay, home of the garbage dump for the capital city of Asuncion.  Most adults there survive by picking through trash, finding items they can recycle and resell to make a bare subsistence living.  Ada and her classmates appeared to be heading for the same lives as their parents, until a man named Favio Chavez came to town and offered music lessons.  The problem was, he only has a few instruments, and they were so valuable that the kids were afraid to carry them home.  So Chavez got to work making instruments from objects he found in the trash.  Before long, there were enough kids playing to form an orchestra.  Ada loved music and worked so hard that she became first violin.  The orchestra has traveled all over the world, and even opened for a Metallica concert.  Back matter includes an author’s note, sources, and photos of the orchestra and some of their instruments.  40 pages; grades 1-4.

Pros:  An inspiring story of how one man has made an amazing difference in the lives of an entire community. The illustrations do a great job of capturing the designs of the different instruments, as well as the emotions of their players.

Cons:  I wanted to hear the music!  Fortunately, YouTube helped me out.  Just search for “Recycled Orchestra of Paraguay” to learn more and to see and hear these amazing instruments in action.