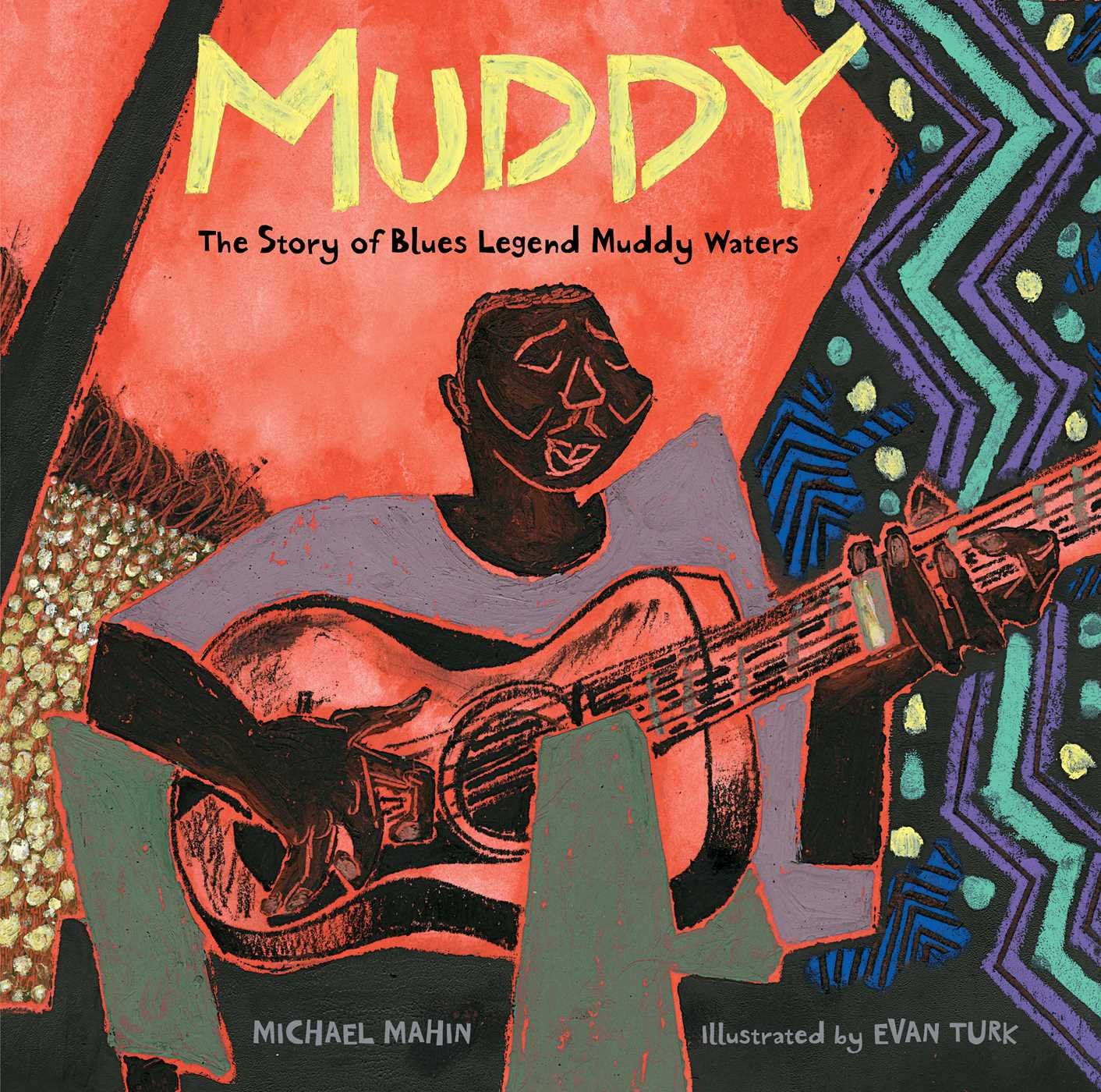 Summary:  McKinley Morganfield was born into a family of sharecroppers on the Mississippi delta, and from a young age, he did his own thing.  He couldn’t stay out of the mud, resulting in his childhood nickname of Muddy.  He loved the blues; even though his grandmother didn’t love them, he taught himself to play guitar and played and sang whenever he could.  As a young man, he got into a fight with his boss, and was forced to leave town.  He headed for Chicago, hoping to make a living as a musician.  After playing in clubs for a while, he tried to make a record.  Producers wanted him to copy others’ music, but Muddy eventually found success with his own sound.  An author’s note gives more information about Muddy Waters’ life, music, and his influence on later musicians like the Beatles.  48 pages; grades 1-5.

Pros:  Evan Turk’s unique illustrations (Caldecott contender?) perfectly capture the spirit of Muddy Waters’ life and the blues music he created.  The text has a lyrical feel to it as well.

Cons:  More biographical information or a timeline would have been useful.

Summary:  Norah is off to a great start in seventh grade.  She has an awesome best friend, she’s acing all her classes, and there’s a boy in her math class who may reciprocate her crush.  One big difference between Norah and her classmates–she is returning after a two-year absence she spent battling leukemia.  Kids who know she’s been sick have different reactions.  Some pity her, while others think she’s trying to get extra attention.  It doesn’t help that her parents have strict rules for her first six months back, including no after school activities and no socializing on weekends.  Norah’s overly gushing guidance counselor wants her to talk to the whole school as part of a program on overcoming challenges, but Norah’s positive that’s the last thing she wants to do.  A sympathetic English teacher and a unit on one of Norah’s favorite subjects–Greek mythology–finally give her the chance to tell others about her experience in her own way.  256 pages; grades 4-7.

Pros:  A realistic look at what it’s like to re-enter life after a long illness.  The author’s afterword indicates that she has had first-hand experience with one of her own children, and this comes through in Norah’s voice as she works through her various emotions at trying to fit in after an experience that most of those around her can’t fully understand.

Summary:  The prince is longing for a wife, but no woman is perfect enough for his mother’s approval.  When a maiden happens by, the prince is hopeful, but Mom decides to test her with the old pebble under the mattress(es) trick.  Naturally, the young woman tosses and turns all night, convincing the mother that she’s the one for her son.  There’s a bit of a twist at the end, as it’s revealed that the prince stuck some pitchforks and stones in with the mattresses, but everyone lives happily ever after anyway.  Includes a glossary of Spanish words used in the text and an illustrator’s note explaining how she was inspired by textile arts of indigenous people of Peru in creating her art.  32 pages; ages 4-8.

Pros:  The catchy rhyming text and South American influences in both language and illustrations make this a perfect companion to the more traditional tale of the princess and the pea.

Cons:  Kids will find it helpful to have some background knowledge of the original story before reading this one. 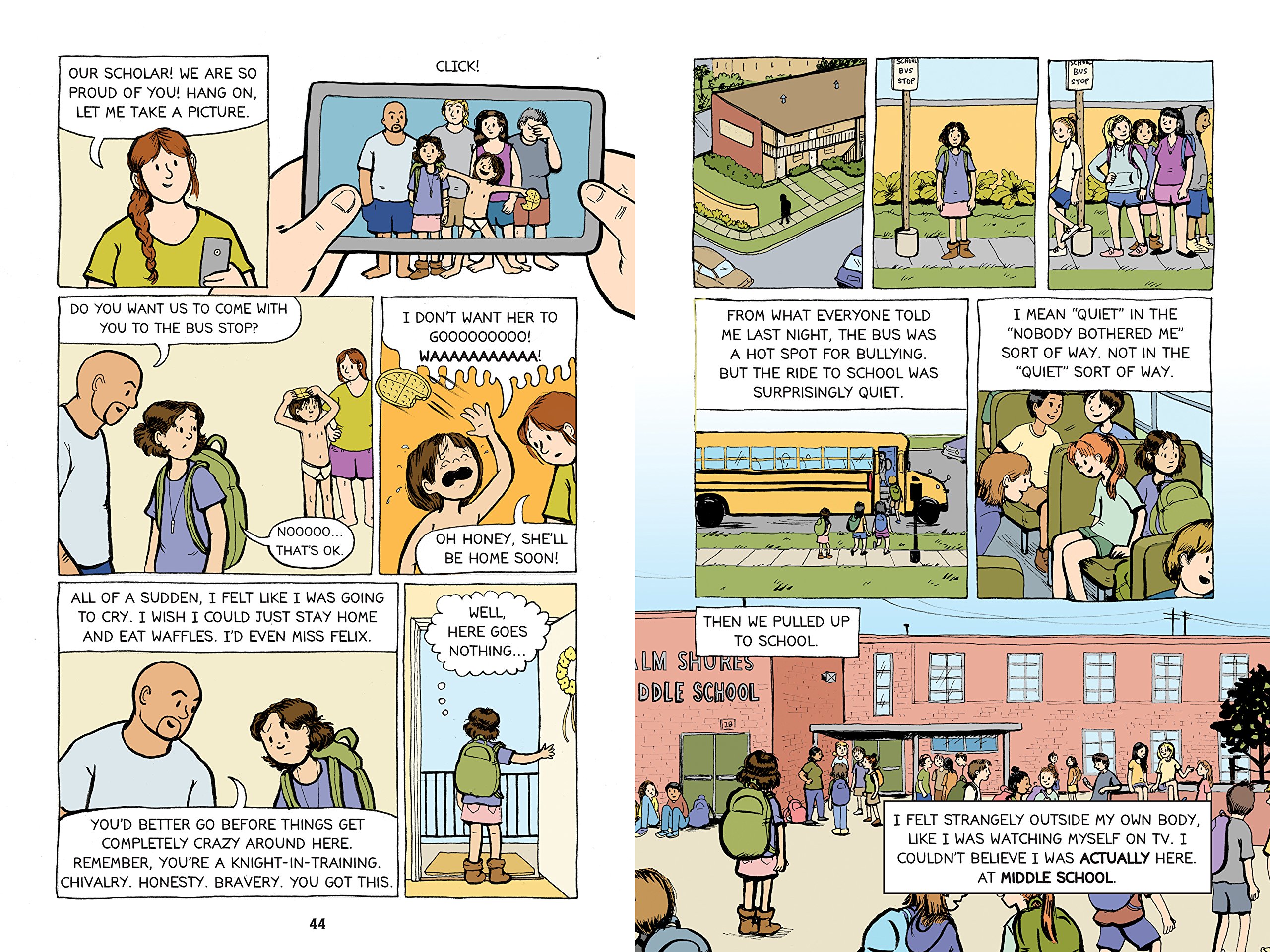 Summary:  Imogene has grown up at the Renaissance Faire, where her parents both work, and been homeschooled all her life.  When she decides to go to public middle school, she’s not quite prepared for a new world of tough teachers, cafeteria food, and figuring out the social hierarchy and where she fits into it.  Each chapter begins with a page that looks like an illuminated manuscript, and chapters switch back and forth between Imogene’s life at school and at home.  The two worlds collide occasionally, once when she realizes that a girl she’s seen bullied is a big Renaissance Faire fan and a potential friend, and again when a group of girls who may or may not be her friends show up for a birthday party.  After a tough week in which Imogene herself is accused of bullying and she throws her little brother’s beloved stuffed squirrel into the lake, she’s ready to move from her role at the Faire from squire to hermit.  But her loving, if unconventional, family and Renaissance community help her come through it all stronger than ever.  248 pages; grades 4-7.

Pros:  Victoria Jamieson’s follow-up to her Newbery-honored Roller Girl does not disappoint in any way.  Imogene is a likeable and believable protagonist, and readers will enjoy learning about the world of the Renaissance Faire the way they did roller derby.  The middle school scenes ring true, and the be-yourself message is inspiring.

Cons:  A couple mentions of sex and a language incident or two may raise a few elementary parent eyebrows.

Summary:  Patina, or Patty, is a ferociously competitive member of the Defenders track team.  In the opening scene she comes in second place in a race, and is so angry at herself she can’t watch the rest of the meet or root for her teammates.  The next week, the coach puts her in a key position of the new relay team, hoping to help her become more of a team player.  Patty struggles with this issue off the team, too, trying to figure out how to deal with the wealthy white girls at her new private school.  Her aunt and uncle are sending her to the school, after Patty and her younger sister Maddie have to move in with them.  Patty’s father is dead, and her mother has lost both legs to diabetes, making Patty fiercely protective of Maddie.  Like Ghost before her, Patina works through her problems through the course of the book in a realistic and sympathetic way, and is struggling to be the first to cross the finish line at a crucial race when the book ends.  240 pages; grades 4-8.

Pros:  The second book in Jason Reynolds’s Track series does not disappoint, offering the same grit and heart as Ghost, with a narrator whose voice is just as true and honest.  Reynolds shows that he can vividly portray a wide range of interesting female characters.  Readers (including this one) will be anxiously awaiting book #3.

Cons:  Patina’s story is a bit more of an internal odyssey than Ghost’s was; readers may miss some of the action from the first book.

I am excited to be attending the AASL conference in Phoenix this November.  If anyone else is going to be there, I’d love to meet up!  Also, I am staying in an AirBnB about a mile and a half from the conference.  It’s a two room guest house, so plenty of room for someone else if you’re in need of an inexpensive place to stay.  Email me at jkdawson115@gmail.com if you want to talk more.

Summary:  When Little i loses his dot, he doesn’t know what to do.  Some of the other letters (s, t, r, a, n, g, and e to be precise) think he looks a little odd.  Without a dot, he looks like a number.  So i sets off in search of his dot.  Along the way, he sees many wonders.  A waterfall is exciting! Spectacular! Magnificent! And very loud! (and made up of exclamation marks if the reader looks closely.)  He pauses to admire some sprouts that look like commas.  At long last, i finds his dot, but he has grown on his journey, and no longer feels like he needs it.  Leaving the dot, he heads for home, where he is greeted by friends a, h, o, and y.  They see that he has changed–he’s now a big I, which makes him a whole word!  The other letters cheer–especially b, r, a, v and o.  48 pages; ages 4-8.

Cons:  The sly humor and hidden punctuation may be lost on younger readers.

Summary:  The husband-and-wife team that brought you When Spring Comes have teamed up again with this look at fall.  Squirrels, acorns, apples, pumpkins, and beautiful falling leaves are all featured in the close-up paintings rendered in the brilliant hues of the season, accompanied by only two sentences of text that stretch over the whole book.  A girl and her dog move throughout the book.  By the end, they are gazing at a white sky, ready for the first snowfall.  40 pages; ages 3-7.

Pros:  A perfect introduction to the season.  We can only hope there will be similar homages to winter and summer.

Cons:  The first sentence stretches on for 19 pages, which may not be the best modeling for how to avoid run-ons. 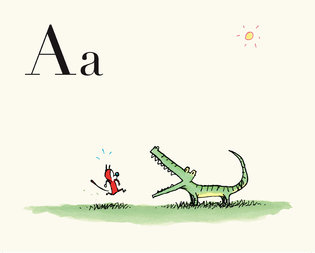 Summary:  In this nearly wordless book, a cat runs away and gets chased by an alligator, bear, and chicken (in that order).  The story unfolds alphabetically, but kids will have to figure out what the word is for each picture.  There’s a happy ending, as a unicorn distributes valentines; the cat waves goodbye to his friends, uses an X on a map to get home, gives a gigantic yawn, then catches some zzz’s.  The whole alphabet is listed on the last page, along with a list of all the words shown in the story.  48 pages; ages 3-6.

Pros:  An intriguing introduction to the alphabet, engaging readers who will have to both figure out the word for each letter and the story those words are telling.

Cons:  The title doesn’t exactly roll right off your tongue. 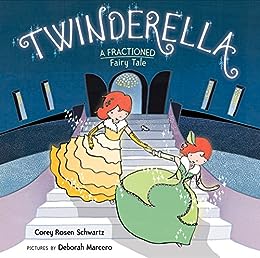 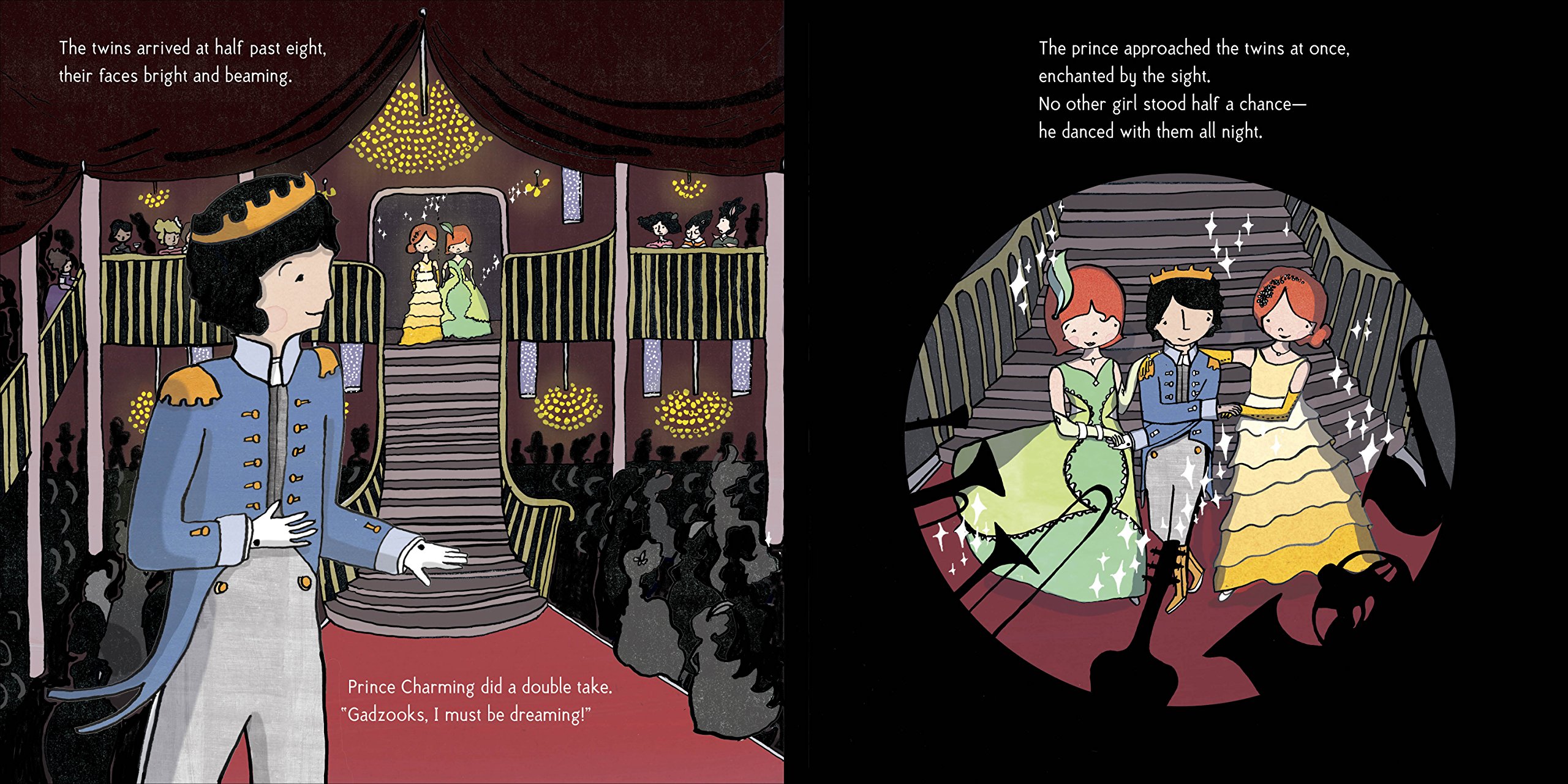