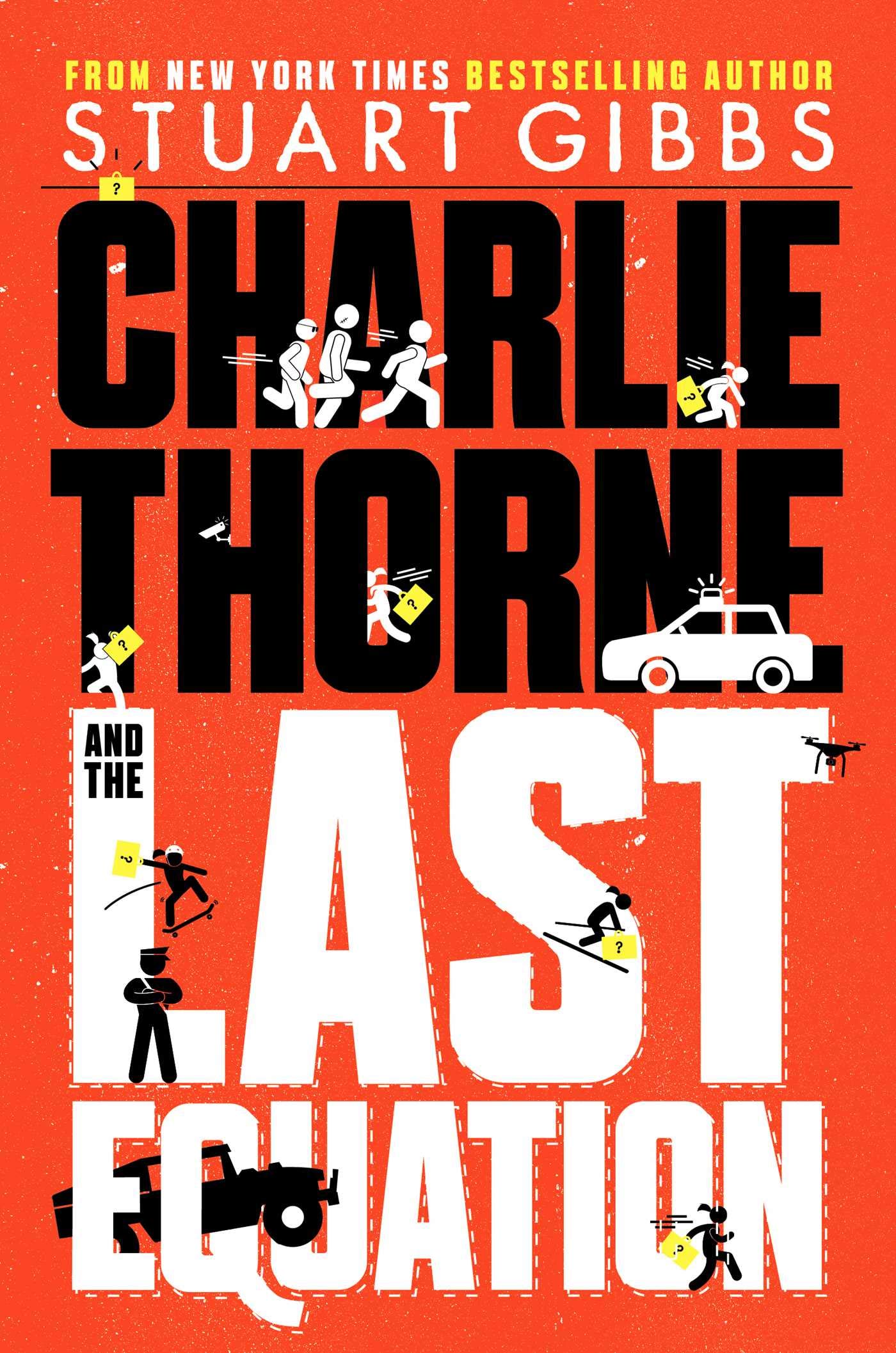 Summary:  The CIA is desperately seeking Pandora, an equation created by Einstein that has the potential to solve all the world’s energy problems–or to take out large portions of Earth’s population.  A terrorist group may be closing in on figuring out Einstein’s super-secret location, so the CIA has decided to recruit Charlotte “Charlie” Thorne, a 12-year-old girl with the world’s highest IQ.  She also happens to be the half sister of Dante, the agent assigned to the case. In a series of nail-biting escapades, Charlie and her colleagues race against the clock to try to beat the terrorists as well as a rogue agent in solving the clues to reveal the location of Pandora.  Filled with non-stop action and narrow escapes, the story ends ambiguously for Charlie, leaving the door open for a sequel. 400 pages; grades 5-8.

Pros:  Stuart Gibbs fans will not be disappointed with his newest series starter.  Charlie occasionally presents as a bratty know-it-all, but then again, she does pretty much know it all, due to her astronomical IQ; she also has a fun disrespect for authority that tweens are sure to appreciate.  The pace never slows down, and readers will be propelled through the pages as fast as Charlie travels down her favorite ski slope.

Cons:  Although Stuart Gibbs’ other series are popular with my fourth and fifth graders, I’m a little hesitant to recommend this for readers younger than fifth grade.  The terrorist leader spews a lot of racist hatred, and there’s a somewhat disturbing scene where a man is burned alive. 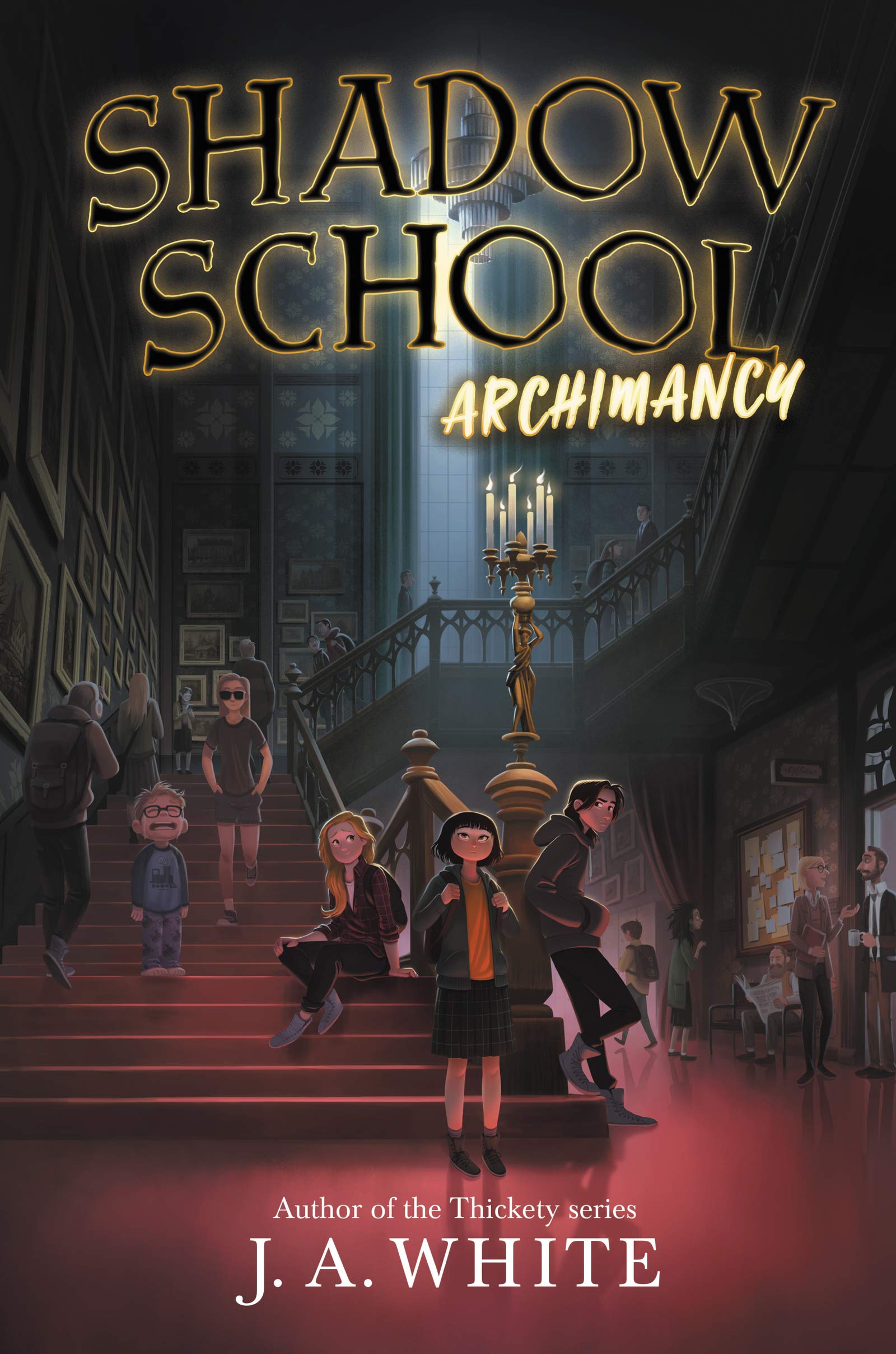 Summary:  Cordelia’s not happy with her family’s move from sunny California to cold and snowy New Hampshire.  Her new middle school, Shadow School, is unusually elegant but seems to have a few dark secrets dating back to the time of its founder, Elijah Z. Shadow.  When Cordelia realizes that she is seeing ghosts that others can’t see, she is pretty freaked out. New friends Agnes and Benji (the only other kid in the school who can see ghosts) soon come to her aid, and as the year goes on, Cordelia slowly begins to feel more comfortable at her new school.  The three kids work to understand the ghosts and unlock some of the more dangerous mysteries hidden within their school. They manage to dispense with the main ones, but the ending and the fact that this is book 1 make a sequel seem inevitable. 304 pages; grades 4-7.

Pros:  A fun blend of spooky ghost story, mystery, and friendship story that will appeal to a wide variety of readers.

Cons:  Although there was plenty of mystery and suspense, this wasn’t as scary as some kids might wish it were. 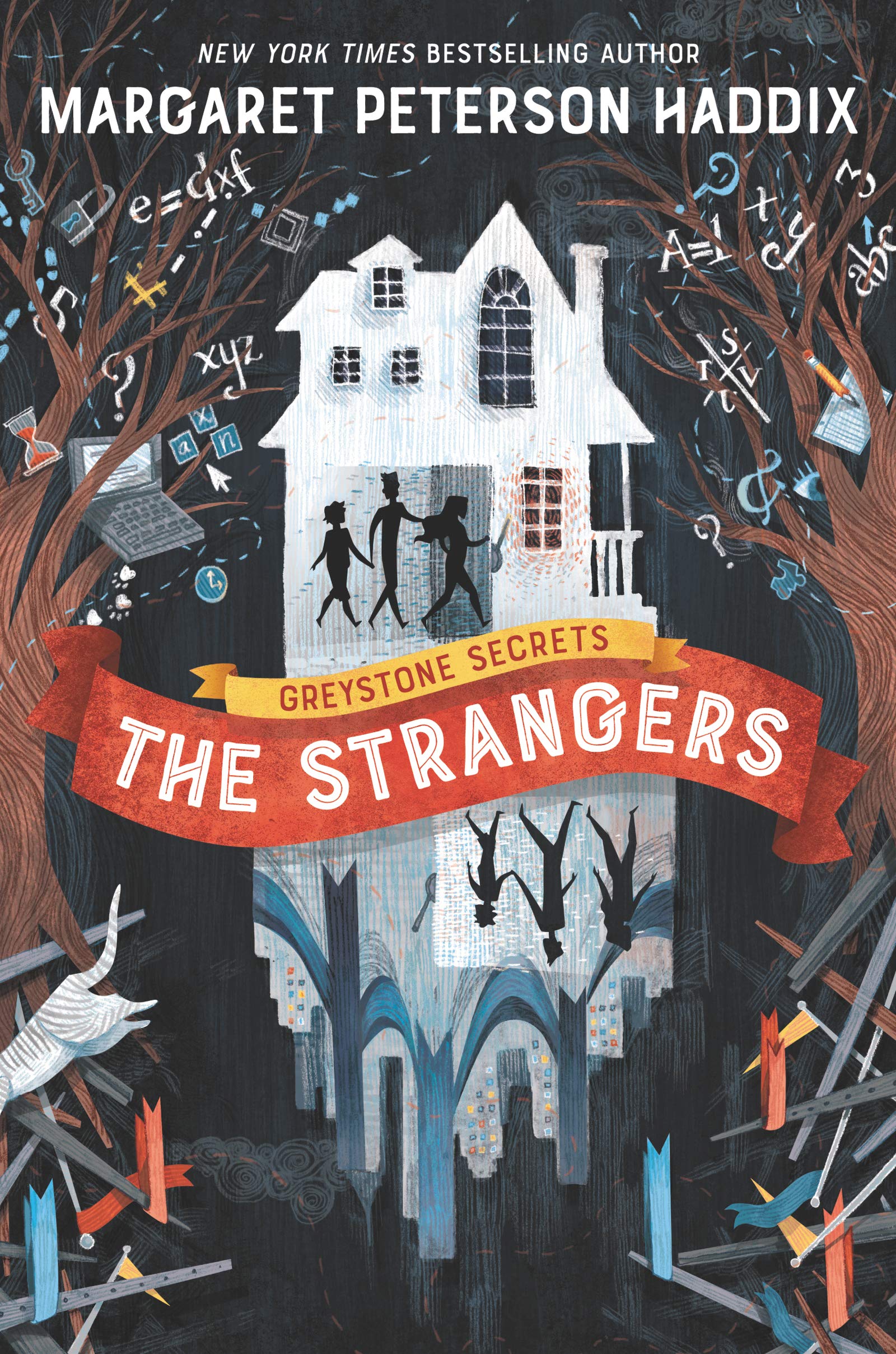 Summary:  Chess, Emma, and Finn Greystone, ages 12, 10, and 8, live with their mom in Ohio.  One day they hear on the news that three kids in Arizona have been kidnapped. As the story unfolds, they learn that these three children have exactly the same names as them.  And exactly the same birthdays. Their mom seems especially disturbed by this bizarre coincidence, and the next day she abruptly announces that she is going on a business trip and isn’t sure when she’ll return.  She arranges them to stay with a woman named Mrs. Morales and her daughter, Natalie, people who are pretty much strangers to the three children. When the kids discover their mom left her computer and phone at home, and that the phone has been programmed to send texts to Mrs. Morales about the trip, they begin to suspect that their mother has disappeared and may never return.  As they delve further into the mystery, they discover some horrifying secrets about their family that could put all of them–as well as Natalie and her mom–in serious danger. A cliffhanger ending paves the way for book #2. 405 pages; grades 5-8.

Pros:  Like the best books by Margaret Peterson Haddix, this one is a total page-turner, keeping the reader guessing as one bizarre clue after another is revealed.  Kids not quite ready for The Hunger Games may enjoy the glimpses of a dystopian world toward the end of the book. 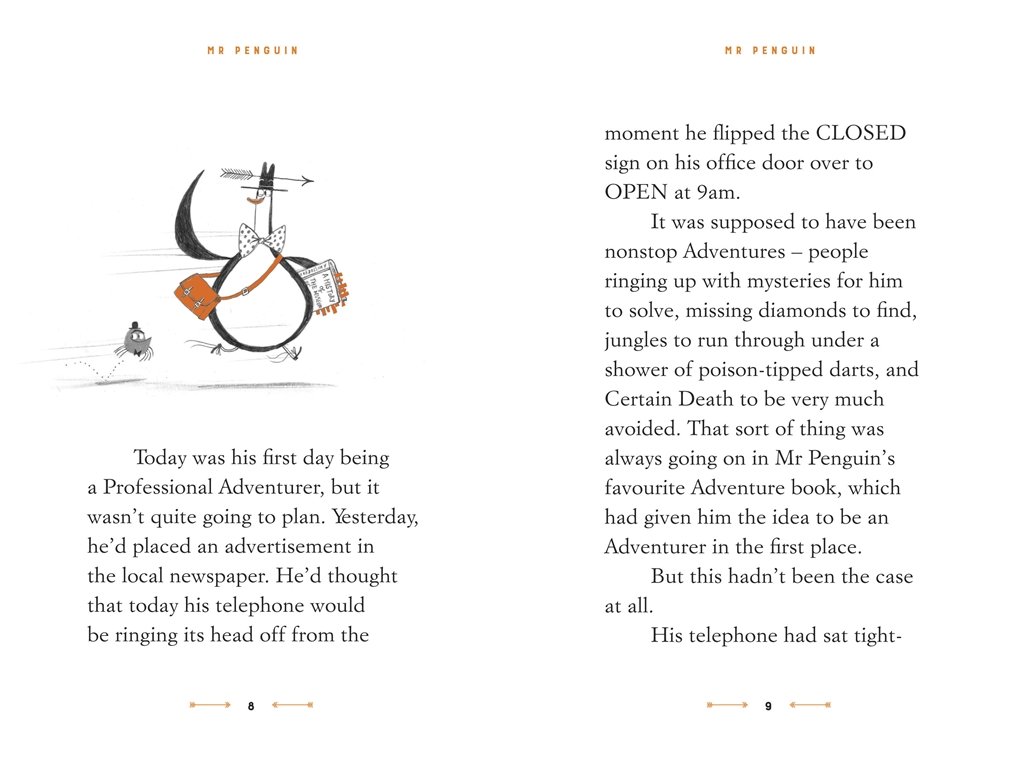 Summary:  Mr. Penguin has invested his life savings into a new business: becoming a Professional Adventurer.  He’s just beginning to feel nervous about his quiet office when the phone rings. It’s Miss Bones, owner of the Museum of Extraordinary Objects, and she’s on a quest to save her falling-down building.  She and her brother have learned there may be treasure buried on the grounds, so Mr. Penguin and his trusty (spider) sidekick Colin go off on their first adventure. They find plenty of it at the museum: an underground jungle, an alligator, and jewel thieves.  After more than one narrow escape, Mr. Penguin and Colin manage to solve the mystery, recover the treasure, and get the thieves behind bars. A ringing phone on the final page indicates this won’t be Mr. Penguin’s last adventure! 203 pages; grades 2-4.

Pros:  Fans of Dog Man and Inspector Flytrap will enjoy this longer, but just as zany, illustrated chapter book.  Filled with plot twists, narrow escapes, as well as a protagonist who’s likely to be a step or two behind the reader, this is a promising start to a new series.

Cons:  I wasn’t a huge fan of the illustrations or the black and orange color scheme.

Summary:  Jada is moving back to New York City after several years spent in France.  She’s dealing with the recent death of her mom in a plane crash, but she can’t accept that her mother is gone.  In fact, she’s sure she has seen her on more than one occasion, although her father assures her that’s just part of her reaction to grief.  New York seems full of strange characters, though, and Jada enlists the help of four new friends to try to figure out who they are and what is going on.  By the end of the story, they’ve revealed everyone’s true identities and learned the truth about Jada’s mother. The epilogue sets up the next book in the series.  272 pages; grades 3-5.

Pros:  Illustrated with Sherri Winston’s artwork, this story has plenty of plot twists and nefarious characters to keep kids turning the pages.  Jada and her friends are a bit smarter and more worldly than the average fifth grader, but that’s all part of the fun, as they go undercover and discover truths that elude the adults around them.

Cons:  Jada’s father’s new relationship with his assistant Cécile seems a bit odd when we learn (spoiler alert) that her mother is actually still alive.

Published by Simon and Schuster Books 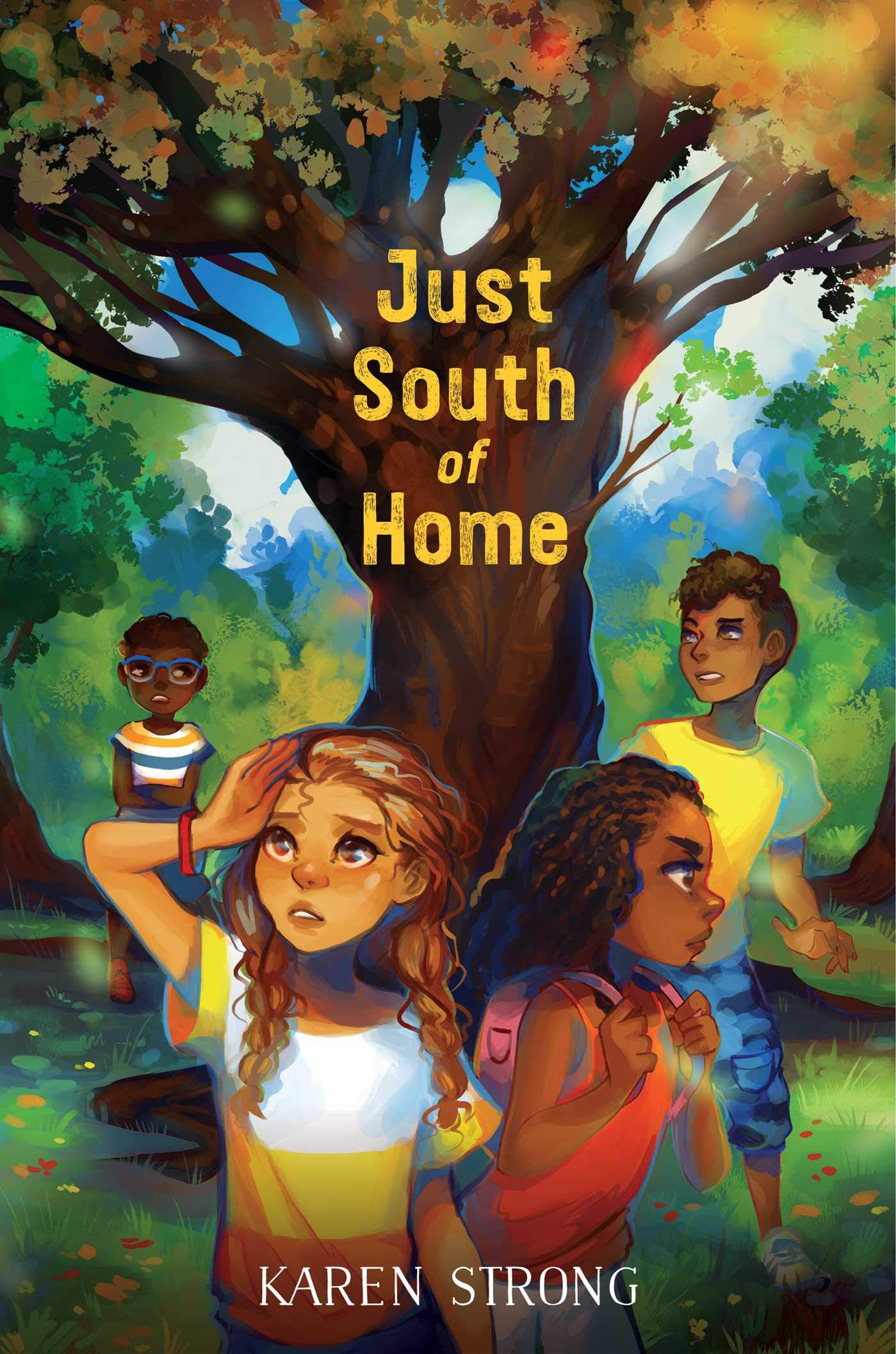 Summary:  Neither Sarah nor Janie is happy when Janie’s mom leaves her with Sarah’s family while Mom goes off to do a Hollywood screen test.  Janie thinks she’s stuck with a bunch of hicks in Warrenville, Georgia, while Sarah doesn’t appreciate Janie’s condescending attitude.  In a desperate attempt to keep her cousin entertained, Sarah takes her to the old Creek Church, a town landmark with a troubled history of racial violence.  Rumors of “haints” prove to be true when the girls are confronted by a mysterious young boy. With the help of Sarah’s brother Ellis and his friend Jasper, the kids have to figure out who the boy is and try to save him from the evil ghostly forces that are threatening to engulf him.  It turns out that it’s not just the church that’s haunted, and as the four uncover family and town secrets, they learn that the past must be confronted to move ahead into the future. 320 pages; grades 4-7.

Pros:  An engaging family and friendship story with a touch of historical fiction and a good ghostly mystery.  The historical part could spark some interesting discussions.

Cons:  This book didn’t strike me as nearly as scary as I was led to believe from the reviews.  I was hoping to shelve it in the “Scary” section of the library, but I think “Mystery” may be more appropriate. 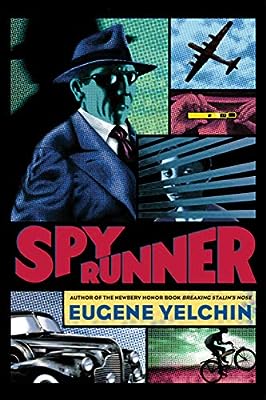 Summary:  Jake McCauley is a patriotic American at the height of the Cold War, wanting nothing so much as to have his father back with the family.  His dad was MIA in World War II, and all Jake has is a blurry photo of him holding Jake as a baby. When his mother unexpectedly rents out his dad’s old study to a Russian named Mr. Shubin, Jake is sure he’s a spy, and is determined to reveal his true identity using techniques from his favorite comic, Spy Runner.  The kids at school hear there’s a Russian in his house, though, and Jake gets labeled a Communist and is ostracized by his former friends.  A man with gold teeth lurking outside his house at night, a black Buick following him all over town, and Shubin’s odd behavior turn Jake’s life upside down, as he becomes increasingly determined to find his father, unmask Shubin, and prove he is a loyal American once and for all.  352 pages; grades 4-8.

Pros:  Middle grade novel or Cold War film noir?  Eugene Yelchin has carved out a unique niche with this suspenseful story.  The narrator (Jake) seems clueless and unreliable at the beginning, ridiculously suspicious of everyone, but a dozen plot twists later, his paranoia starts to seem well-founded.  Yelchin’s blurry black and white photos of 1950’s suburbia add appropriately bizarre and sinster touches to this fast-paced thriller. A Newbery contender?

Cons:  It’s a pretty intense plot, with Jake almost getting murdered more than once by an potpourri of menacing characters.