Summary:  It’s a big night for Little Wolf–his first howling.  He and his father, Big Wolf, travel to just the right spot under the stars and a full moon.  Big Wolf demonstrates, “Aaaaaoooooooo!”.  Then Little Wolf tries.  “Aaaaaooooooooo! I’m hoooowling, ‘oooowlng, ooooowling!”  Hmm, not quite.  Big Wolf tries again.  And again.  But each time Little Wolf adds more and more, skiddily skoddily beep bop and some diddily daddily dooooooo.  Big Wolf tells him it’s not proper howling form, and Little Wolf tries one last time.  This time, Big Wolf can’t help himself.  His paws start tapping, and before long he joins in, do-wopping just like his son.  “Wait until we tell the others!” exclaims Little Wolf as they head for home.  “Oh, I expect they already know,” says his father.  32 pages; ages 3-7.

Pros:  The pictures are gorgeous, perfectly capturing the moonlit night and the two beautiful wolves.  The message about self-expression is just right for kids.  And the right reader could have a lot of fun reading those howls.

Cons:  I suspect I’m not the right reader.

Summary:  A year in the life of Vixen, a female fox.  The reader follows her as she hunts in the snow, pouncing on a mouse in an acrobatic move, and escapes a couple of barking dogs.  She meets up with her mate, and eventually moves into a den.  When spring comes, there are four fox kits in the den.  The grow all summer, and on the last page, they are ready to go off on their own, just as autumn arrives.  There are two pages of additional information about the red fox, plus a brief glossary and bibliography.  32 pages; grades 1-4.

Pros:  The story of Vixen is packed with information about foxes.  Woven into the story are facts about how foxes find food, what they eat, how they take over other animals’ burrows for their dens, and how the parents take care of their babies.  The illustrations are beautiful and add additional information.  There is plenty here for a research report, or simply to satisfy a curious child.

Cons:  I seriously hope I never stumble across a hole in the snow like the one Vixen used as a storage place for her dead mice.

Summary:  Niko loves to draw his feelings.  When he sees something, he tries to capture the way it makes him feel with splashes of color on the paper.  His family and friends don’t understand.  They keep trying to figure out what the object is that he’s drawn.  This makes Niko sad, and he draws that sadness.  Then one day, he meets Iris.  When she asks to see his pictures, Niko is hesitant, afraid she will react like everyone else.  Finally, he takes her to his room, and she looks at all the pictures.  She just looks at first, but when she sees his picture of sadness, she says, “You must have been sad when you drew that picture.”  Nico feels like a window has opened in his brain.  Immediately, he draws a new picture–one that shows how it feels to make a new friend.  32 pages; ages 4-8.

Pros:  A gentle, warm introduction to art, friendship, and being yourself..

Summary:  Neptune welcomes you to Ocean Wonders, a three-story building that houses a giant aquarium.  Along with the octopus, shark, and fish, there lives a mermaid whom you just might catch a glimpse of if you are patient.  After hours, Neptune tells the fish girl the story of how he rescued her when fishermen and sharks killed off all the other mermaids.  Now he protects her, and in return she hides among the sea flora and fauna, revealing just enough of herself to lure humans into Ocean Wonders.  One day, though, she makes a connection with a girl her own age, who names the fish girl Mira.  The two become friends, and Mira’s world begins to change.  She learns that Neptune is really just an ex-fisherman, who creates his “magic” world with machines.  One night she manages to leave the tank, and learns that her tail becomes legs on dry land of water.  Mira sees her chance to escape, but will she be able to leave behind the aquarium world she has known all her life?  192 pages; grades 5-8.

Pros:  Triple Caldecott medalist David Wiesner creates a fairy-tale world reminiscent of his book Flotsam.  Middle school readers will relate to Mira’s struggle to figure out who she is and where her place in the world is.

Cons:  The relationship between Neptune and Mira borders on creepy. 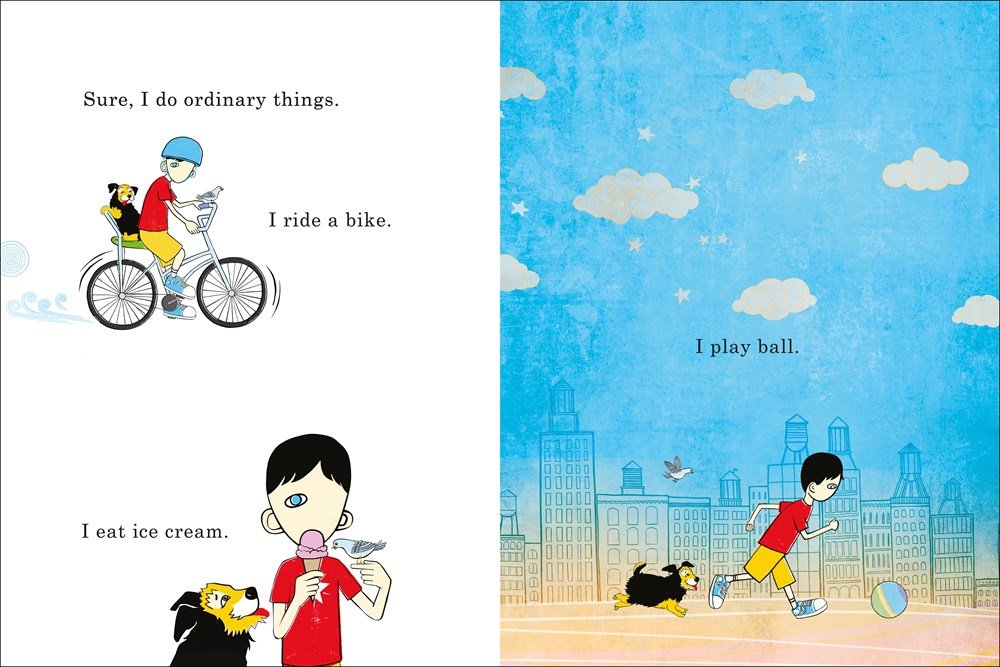 Summary:  When “Opportunity Busing” comes to Charlie’s neighborhood school in 1970’s southern California, many of his friends’ parents opt for other schools.  But Charlie’s parents, who have experienced some prejudice against their Jewish faith, choose to keep Charlie at Wonderland.  Some 15 miles away, Armstrong’s parents decide to take advantage of the opportunity, and send their reluctant son to sixth grade at Wonderland.  Told in the alternating voices of the two boys, the story shows the two-steps-forward-one-step-backwards progress of school segregation.  Gradually, the two boys go from sworn enemies to a tentative truce to a close friendship.  Charlie, still hurting from the death of his older brother the previous year, eventually shares his pain with Armstrong, who in turn gives Charlie a taste of what his life in the projects is like.  By the end of sixth grade, they are almost like brothers, unsure if they will see each other again as separate junior high schools loom in their futures.  304 pages; grades 5-8.

Pros:  Both funny and poignant, Armstrong & Charlie grabs the reader immediately with two distinct voices switching off every page or two. With lots of 1970’s era details (how could I have forgotten about click-clacks?), kids will get a taste of what school segregation was and how it affected ordinary kids of both races.

Cons:  While many fifth graders would enjoy this book, be aware that there is quite a bit of profanity, plus detailed discussions of French kissing and spying on naked women, before recommending it to them.

Summary:  Jameson refuses to wear anything but green pants, going so far as to wear them exclusively for swimming.  Any attempts by others to foist red or blue pants on him result in blue pants in a tree or red pants on the dog.  Jameson believes he can do anything, as long as he’s wearing his green pants.  So he can’t make up his mind when Uncle Armando and his beautiful fiance Jo invite Jameson to be in their wedding.  He really wants to do it, but one of the requirements is wearing a tuxedo–with black pants.  His indecision persists until moments before the big event.  Finally, with a little help from Jo, he’s able to be in the wedding but still find a way to express himself.  40 pages; ages 3-7.

Pros:  An empowering story for kids who have definite ideas about their likes and dislikes.  The illustrations are funny and pretty cute.

Cons: I’m no fashion expert, but has anyone actually worn green pants since Mr. Green Jeans hung out with Captain Kangaroo?

Summary:  Forty years ago, the Dutch city of Amsterdam had streets clogged with traffic, dangerous to anyone attempting to ride a bicycle.  How did it become the capital city of bicyclists, home to more bikes than cars?  Back in the 1970’s a young mother named Maartje Rutten watched beautiful old buildings being destroyed to make room for more highways, roads that were dangerous for her and friends who wanted to bicycle with their kids.  She began organizing protests, blocking the roads with demonstrations and even parties.  The fun turned serious when she met Vic Langenhoff, a reporter whose young daughter was killed by a car while biking to school.  The two joined forces, and their steady pressure on the government resulted in fewer cars, more bicycles, and safer streets.  Amsterdam has served as a model for making streets bike-friendly in other cities around the world like Tokyo and New York.  An author’s note tells more about Maartje Rutten and her campaign and gives a brief bibliography.  Great cyclists from around the world are shown on the endpapers.  40 pages; ages 4-10.

Pros:  Just in time for Earth Day, another inspiring environmental story from Allen Drummond, nicely illustrated with his cartoon-style watercolors.

Cons:  Kids may have to be led to this book, as the subject matter might not grab them right away.

Summary:  Matt loves Monster Zap cards and plays with them every day at recess.  But when the cards lead to problems on the playground, Principal Leon bans them.  Matt and his friends try to get around the ban by making their own cards, even getting encouragement from their cool teacher Miss Casey.  But when bad boys Mark and Steve make cards portraying Mr. Leon as a monster, it looks like there will be even more trouble.  It’s up to Matt to find a solution that will work for everyone in the school…and maybe even bring back the real Monster Zap cards.  88 pages; grades 1-4.

Pros:  A fun slice-of-life school story for kids ready to move up to chapter books.

Cons:  Clearly, Miss Casey is not adhering to the Common Core curriculum.

Summary:  Four kids from the same neighborhood share the story of an early summer day.  Valencia, whose voice is the only first person one, loves spending time observing the natural world, but sometimes feels cut off from other kids because she is deaf.  Virgil is the only quiet member of a loud, boisterous family and struggles at school, both academically and socially.  Kaori believes herself to have psychic powers and uses them to try to help Virgil.  Chet is a bully who picks on Virgil.  When he throws Virgil’s backpack in an old dry well, Virgil climbs down to rescue his guinea pig who is in the pack and can’t get back out.  Meanwhile, Valencia and Kaori have met for the first time, on a day Virgil had an appointment with Kaori.  When he doesn’t show up, they suspect something is wrong, and the wheels are set in motion for all four characters to come together.  Their lives intersect in the woods, where a dramatic rescue sets the stage for a happy ending.  320 pages; grades 3-7.

Pros:  Kelly does a masterful job of creating fully developed characters through the dialogue, actions, of memories of each child.  Even the bully becomes more understandable as the story unfolds.  Virgil’s plight is enough to keep the pages turning to the end.

Cons:  There’s (possibly) a bit of magic for Virgil in the well that might be confusing to younger readers.