Summary: Derek is back, this time getting a chance to pursue his love of video games. His father arranges for Derek and his friends to be part of a focus group to test a new video game, Arctic Ninja, before it comes out on the market. This makes Saturdays a lot of fun, but during the week Derek is stressing about the upcoming state standardized tests. He’s got a new tutor to help him, but when he tells her some of the top-secret details about Arctic Ninja, he suddenly finds himself in hot water. Derek starts experiencing some familiar feelings of failure, and it’s up to him to figure out how to turn things around.  Recommended for ages 9-12.

Pros: Another winning entry in the “My Life” series. Derek Fallon is Greg Heffley with a heart…and a brain. Short chapters, a large font, and lots of comic-type illustrations will attract Wimpy Kid fans.

Cons: Readers of a certain age may be put off by an icky romance developing between Derek and his friend Carly.

Summary:  When Lizzie Murphy was growing up in turn-of-the-century Rhode Island, girls didn’t play baseball.  But Lizzie’s brothers played, her father had played, and she wanted to play, too.  She became batgirl for her brother’s team and carried her father’s old ball and glove everywhere.  At one game, both teams realized no one had brought a ball.  Lizzie had her ball, but refused to lend it unless they’d let her play.  After a star turn at first base and four hits, she was a member of the team.  She continued to play into adulthood, making a living on the Warren, Rhode Island semipro team, and was the first person of either gender to play on both the National and American Leagues’ all-star teams.  She even got a single off of legendary pitcher Satchel Paige while playing on a Negro League team.  She finally retired from baseball in 1935, at the age of 40.  Recommended for grades 1-3.

Pros:  An interesting and little-known story about a woman athlete who refused to give up her dream despite enormous obstacles.  Emily Arnold McCully doesn’t disappoint with either the story or the illustrations.

Cons:  Too bad Lizzie didn’t blaze a trail into MLB for other women.

Summary: Monty the lion usually lets his meerkat friends play with his magnificent mane.  But one day they go too far with their braiding and decorating, and Monty has had enough.  He stomps off to the water hole, where a crocodile lures him closer by complimenting him on his mane.  The crocodile tries to take a bite, but only gets a mouthful of mane.  Monty runs away, the crocodile in hot pursuit, only to realize too late that he’s led the crocodile right to the meerkats.  With a tremendous “ROAR!”, Monty scares off the crocodile, and is happy to let his friends play in his mane once again.

Pros:  A nice story about friendship and loyalty, with magnificent illustrations.  The two-page spread of Monty’s roar is suitable for framing.

Cons:  I read this to several classes of kindergarteners and they seemed a bit lukewarm about it.  I liked the pictures better than the story.

Summary: Ava’s sweating it out through another math quiz when she hears a voice giving her the right answer. She’s surprised that no one else can hear the voice, but is grateful that it helps her ace the quiz. Eventually she discovers that the voice is coming from the pencil she found in the junk drawer as she was rushing to get ready for school. She and her friend Sophie learn how to use the pencil to uncover answers about the people around them. At first it seems great but then, as so often is the case with magic, complications arise. Ava discovers that knowing people’s secrets isn’t always for the best and learns that she really is brave enough to make it through the tough times in her life on her own. Recommended for grades 4-6.

Pros: Fans of Wendy Mass’s Willow Falls book will enjoy this realistic fiction story with a little magic thrown in.

Cons: Unfortunately, this is just a realistic story with a single magical element. It doesn’t quite come up to the level of Wendy Mass or Lisa Graff’s A Tangle of Knots in weaving magic through the whole story with a big wow at the end.

Summary:  Stick and Stone are all alone until one day when Stick sticks up for Stone against the bullying Pinecone.  They become best friends, exploring the world together, until one day a hurricane blows them apart.  Fortunately, Stone finds his friend, stuck head-down in a puddle, and is able to affect a rescue (“You rock, Stone,”).  Together, they make a perfect 10.  Recommended for preschool – grade 3.

Pros:  A delightful story of friendship.  The illustrations perfectly complement the rhyming text.

Cons:  I would have liked to see some redemption for Pinecone.  It is merely hinted at on the last page.

Summary:  When Lily’s blind dog Lucky goes after Salma’s lunch, the two girls meet and become friends.  Salma is part of the migrant farm community that arrives every summer to pick the wild blueberries in Lily’s Maine hometown.  Although Lily has always known of this group’s existence, she’s never paid much attention to them until she meets Salma.  Salma proves herself a true friend by offering to help Lily raise money to help pay for an operation to restore Lucky’s sight.  In return, Lily offers to help Salma become the first migrant girl to win the annual Blueberry Queen pageant.  Last year’s winner, Hannah, used to be Lily’s best friend before she became so boy crazy, and Lily finds herself with divided loyalties between her two friends.  As the summer draws to a close and the pageant gets closer, Lily finds herself with more questions than answers about her relationships with her friends and family.

Pros:  Cynthia Lord’s many fans will not be disappointed with her latest work.  Once again, she portrays a sympathetic cast of characters faced with realistic dilemmas of growing up.

Cons:  Be careful that you don’t get caught without a box of Kleenex as you navigate your way through the last few chapters.

Summary:  Did you know that some scientists think octopuses may be as smart as dogs?  Or that if it’s an octopus’s beak can fit through an opening, the rest of its body can, too?  These are just a couple of the amazing facts about this unique animal you’ll learn in Laurence Pringles latest entry in his Strange and Wonderful series.  Many aspects of the octopus’s brief (usually less than a year) life are covered here, including eating, protection, different types, intelligence, and reproduction.

Pros:  Students could write a very complete report using this book.  The information is engagingly presented, illuminated by beautiful detailed illustrations on every page.

Cons:  Although the cover looks like a primary-grade picture book, this is probably more appropriate for upper elementary or possibly even middle school students.

Summary:  Poor Hissy!  All he wants is a nap, but Georgie keeps talking to him about her day and school, Dad is into power tools, and three-year-old terror Zeb won’t leave him alone. Is it any wonder Hissy Fitz is cranky and ready to hiss at, spit on, or even scratch anyone who gets too close.  And then when the family’s finally asleep, Hissy’s hunting instinct kicks in, and all he can think of is going outside and slinking around the neighborhood.  Follow a day in the life of this grumpy but loveable cat.

Pros:  Lots of humor, short chapters, and frequent illustrations will make this a good choice for beginning chapter book readers.

Cons:  I remember now why I am a dog owner.

Summary:  What is the most dangerous animal in Africa?  A lion? A crocodile?  No, it’s that adorable hippopotamus innocently wallowing in the mud.  Did you know a hippo can bite a crocodile in half, and run 25 miles per hour?  This book is packed with fascinating information about how hippos eat, fight, move, and reproduce.

Pros:  Kids of all ages will enjoy this excellent nonfiction book.  The brief, engaging text and large colorful illustrations make it appropriate to read aloud to preschoolers.  (They’d especially enjoy the double-page picture of males swatting balls of dung at each other with their tails.)  At the same time, there’s enough information here to write a pretty complete report.  There’s even a brief index with a note on how to use it.

Cons:  The book starts off as a general introduction, then on page 12 introduces a specific hippo whom we follow through the rest of the book.  I didn’t quite catch on to this until the end of the book, which made for a little confusion.  I think the problem was the hippo’s name…Hippo. 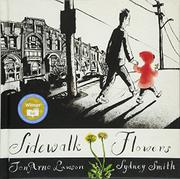 Summary:  In this wordless picture book, a little girl in a red coat is walking home from the grocery store with her busy, distracted (think cell phone) father.  As they walk, she finds flowers growing in sidewalk cracks.  Their trip through the city is drab and gray, with her coat and the flowers the only bits of color.  Halfway through, they enter a park, and she starts leaving the flowers as gifts—on a dead bird, with a man sleeping on a bench, tucked into a dog’s collar.  Arriving home, she distributes the rest to her family. As soon as she starts giving away the flowers, the pictures become filled with color.  On the last page, she tucks one final flower behind her ear as she watches a flock of birds overhead.

Pros:  More and more, I love wordless books.  This one has so much to look at, with multiple panels on many of the pages.  The message is simple but beautiful.

Cons:  I felt like there was some greater significance to the last page that I didn’t quite get.