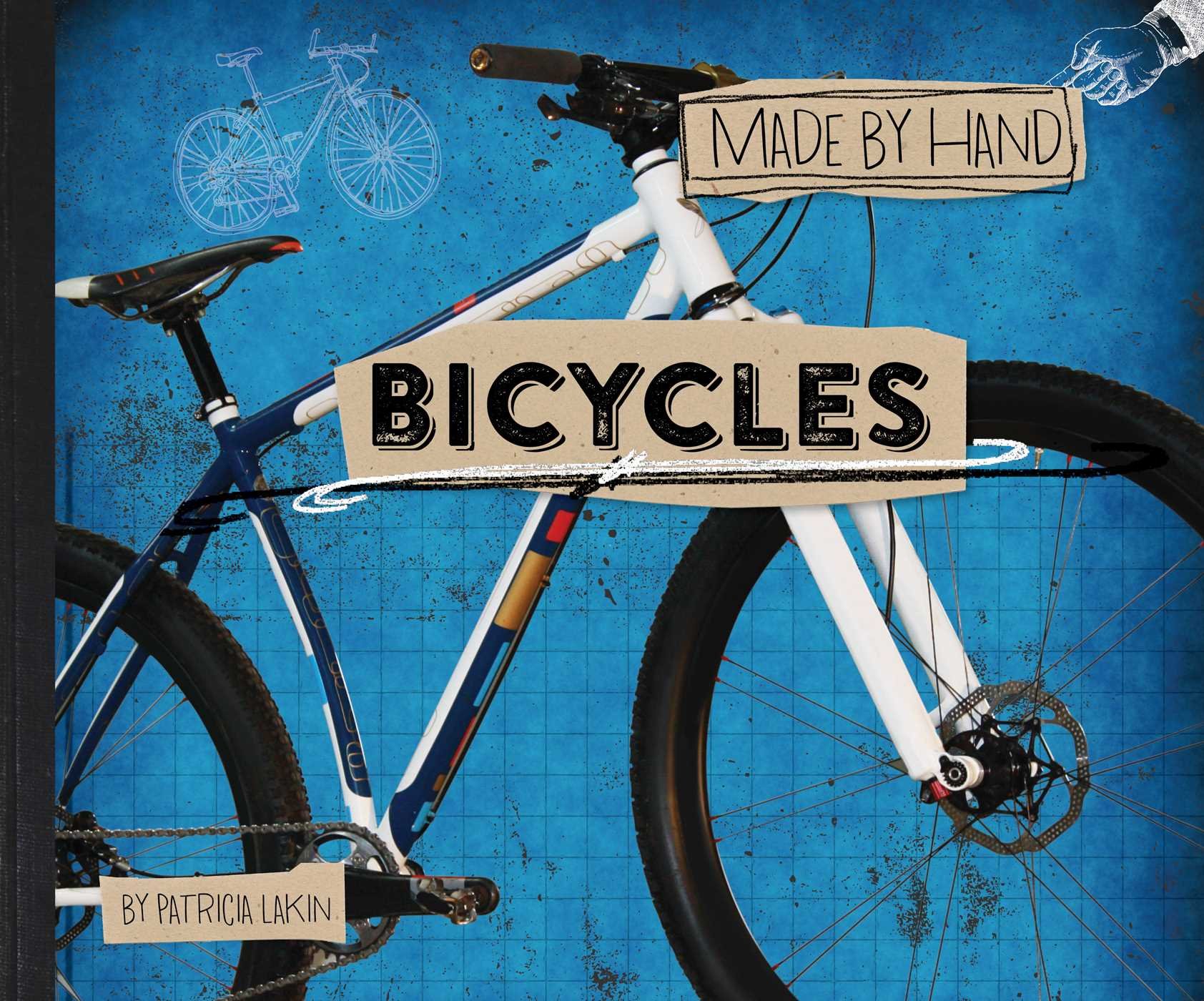 Summary:  Aaron Dykstra is a craftsman who creates handmade bicycles and sells them through his company, Six Eleven Bicycle Company (named for the 611 train that was supposedly the best and most beautifully designed).  The first few pages of this book give a history of the bicycle and a brief biography of Dykstra and how he came to be a bicycle maker.  Then the reader is shown the twenty steps of his creation process, from getting the customer’s specifications to the final item rolling out of the shop.  There’s a photo of each step, with a short caption explaining the process.  The next two pages tell about Aaron’s program for middle school students, The Making Foundation, and invite readers to try creating by hand.  Finally, there is a four-page timeline of the bicycle, followed by a glossary and resources (books and websites).  32 pages; grades 3-7.

Pros:  A perfect complement to any makerspace program.  A second book in the series, Skateboards was published simultaneously.  The book’s design has the feel of a blueprint or how-to manual, and the photos and biographical information about Aaron make the creation process appealing.

Cons:  I looked at Aaron’s website, and he requires a $1500 deposit before starting on a bike.

Summary:  Ivy and her grandmother live in the messiest cottage in Broomsweep…messy, because her grandmother is Meg the Healer, whose large garden and knowledge of plant medicines have made her a famous doctor of humans and animals.  Rumor has it that the new queen is traveling through her kingdom to find the best town.  Ivy and Grandmother are under pressure from the mayor’s wife to get their property up to the standards of the rest of Broomsweep.  When an injured griffin, a dragon with a severe head cold, and a flock of pixies arrive, cleaning up seems like an impossible task.  But Grandmother assures Ivy it will all work out.  And when four trolls invade the village at the same time the queen shows up unexpectedly, it all (eventually) does.  144 pages; grades 2-4.

Pros:  A cozy fantasy with a fairy-tale feel and a happily-ever-after ending.  A large font and plenty of illustrations make this a good choice for early chapter book readers who are ready to move on from the Magic Tree House.

Cons:  Not too many surprises in this fairly predictable tale.

Summary:  37 labs in nine chapters introduce a wide variety of mathematical topics, such as geometry, topology, fractals, and graph theory.  Each chapter begins with a “Think About It” question to be considered before diving into the labs.  Each lab includes a materials list, a boxed math fact, instructions, and diagrams.  The activities seem like simple games, puzzles, and craft projects, but don’t be fooled, constructing with toothpicks and gumdrops can lead to a greater understanding of antiprisms and Platonic solids.  In the authors’ introduction, they state that the activities have been tested on kids ages 6-10, but can be enjoyed by middle school students, high school students, and adults.  Back matter includes pull-outs to use with a few of the labs, hints and solutions for many of the labs, and an index. 144 pages; grades 2+

Pros:  “Mathematicians play,” the authors state in their introduction.  If you think you hate math, or you know a child who hates math, this book may be just the remedy.  Every activity looks like fun and is simple to set up, yet leads to a mathematical way of looking at the world.  The colorful photos of kids engaged in the activities and the simple, clear diagrams add to the fun.

Cons:  My neighbors may call for reinforcements when I head outside with five feet of string, two broomsticks, and some chalk to draw a giant ellipse in my driveway.

Summary:  A celebration of gardening and plants, told in rhyming text.  Gardens can be anywhere: “An old empty lot/makes a good growing plot. But a pan or a bucket,/a pot or a shoe,/a bin or a tin, or a window will do.”  You just need seeds, dirt, water and sunlight to grow all kinds of things.  The landscapes shown are mostly urban, and the gardens range in size from small containers to large plots.  If enough people in your community get inspired, the anywhere farm might just turn into an everywhere farm.  32 pages; ages 2-7.

Pros:  Perfect for springtime, the rhymes are extra catchy and would be fun to read aloud.  The gardeners come in all shapes, sizes, ages, and colors, and the gardens are equally diverse.

Cons:  The whole gardening process is a bit oversimplified.

Summary:  In this modern-day middle school retelling of Cyrano de Bergerac, Gracie discovers quite unexpectedly that she has a crush on her friend A.J.  When A.J. is asked in a convoluted series of maneuvers which girl he likes, it turns out to be Sienna, Gracie’s pretty, sporty best friend.  Gracie has grown up with parents who lost their first daughter at a young age, so she knows it’s important to keep people happy and never let on when you’re feeling upset.  When Sienna feels awkward about texting A.J., Gracie takes over as the voice of Sienna, pleasantly surprised by how witty A.J.’s texts are.  She’s able to comfortably report all this to Emmett, the vertically-challenged boy next door who has been her best friend since preschool.  Secret identities are revealed, feelings are hurt, and relationships shift cataclysmically at a single eighth grade party, as Gracie realizes that being 14 is way harder than being 13 ever was, but maybe more rewarding as well.  320 pages; grades 5-8.

Pros:  Middle schoolers will zip through this fresh and funny novel.  There are no big surprises about who ends up with whom, but the realistic characters and settings, as well as Gracie’s  slightly sarcastic but caring voice will keep them hooked until the end.

Summary:  Badgers Tic and Tac are bored.  They reject several ideas from their mother, until she suggests they help her hang the laundry on the clothesline.  She leaves them to the job while she heads to the market.  When the laundry basket has been emptied, the boys are still enjoying their new activity.  They move on to the winter clothes and blankets, then pillows, lampshades, and even the toaster, adding twine as they run out of clothesline.  When Ma Badger returns, the reader gets an aerial view of what she sees, lines running all through the yard with every imaginable object hanging from them.  Calmly, she informs them that they forgot a couple of things.  The final page shows Tic and Tac hanging from the seats of their pants with clothespins, complaining once again that they are bored.  32 pages; ages 3-6.

Cons:  I knew right away that trip to the market was going to be a bad idea.

Summary:  From the time he was born, Johann Sebastian Bach was surrounded by music (and also, apparently, by people named Johann).  His whole family–many of whom, incidentally, were named Johann–made music, so much so that in his part of Germany, musicians were called bachs.  His parents died when he was young, and he went to live with his oldest brother, Johann Christoph (traveling with another brother, Johann Jacob).  There, he learned by copying music and playing a great variety of instruments, until he was able to express his many deep emotions through his own compositions.  The final two pages of the book show the music coming from his organ as beautifully colored floating designs, traveling through time to contemporary listeners.  An author’s note gives additional biographical information.  40 pages; grades 1-5.

Pros:  Spare text, told in Bach’s voice, is gorgeously accompanied by illustrations which also convey information about his life.

Cons:  Too many characters named Johann.

Summary:  If you’ve read Kwame Alexander’s Booked or The Crossover, it will come as no surprise that both of his parents loved words and books.  He writes in his preface of being raised on a steady diet of poetry, and he pays homage to his favorite poets in this book.  The 20 poems, written by Alexander and fellow poets Chris Colderley and Marjory Wentworth celebrate poets and their poetry from Emily Dickinson to Langston Hughes to Rumi.  The last six pages give quite a bit of additional information about each poet.  56 pages; grades 3-7.

Pros:  A wonderfully diverse collection of writers and poems, brought to life with color collages by Caldecott honoree Ekua Holmes.  The second paragraph of Kwame Alexander’s preface would make a perfect introduction to a study of poetry, and the entire book could be used as a curriculum guide to introduce students to 20 different poets.

Cons:  Readers unfamiliar with the poets and their works may not appreciate these poems on their own. 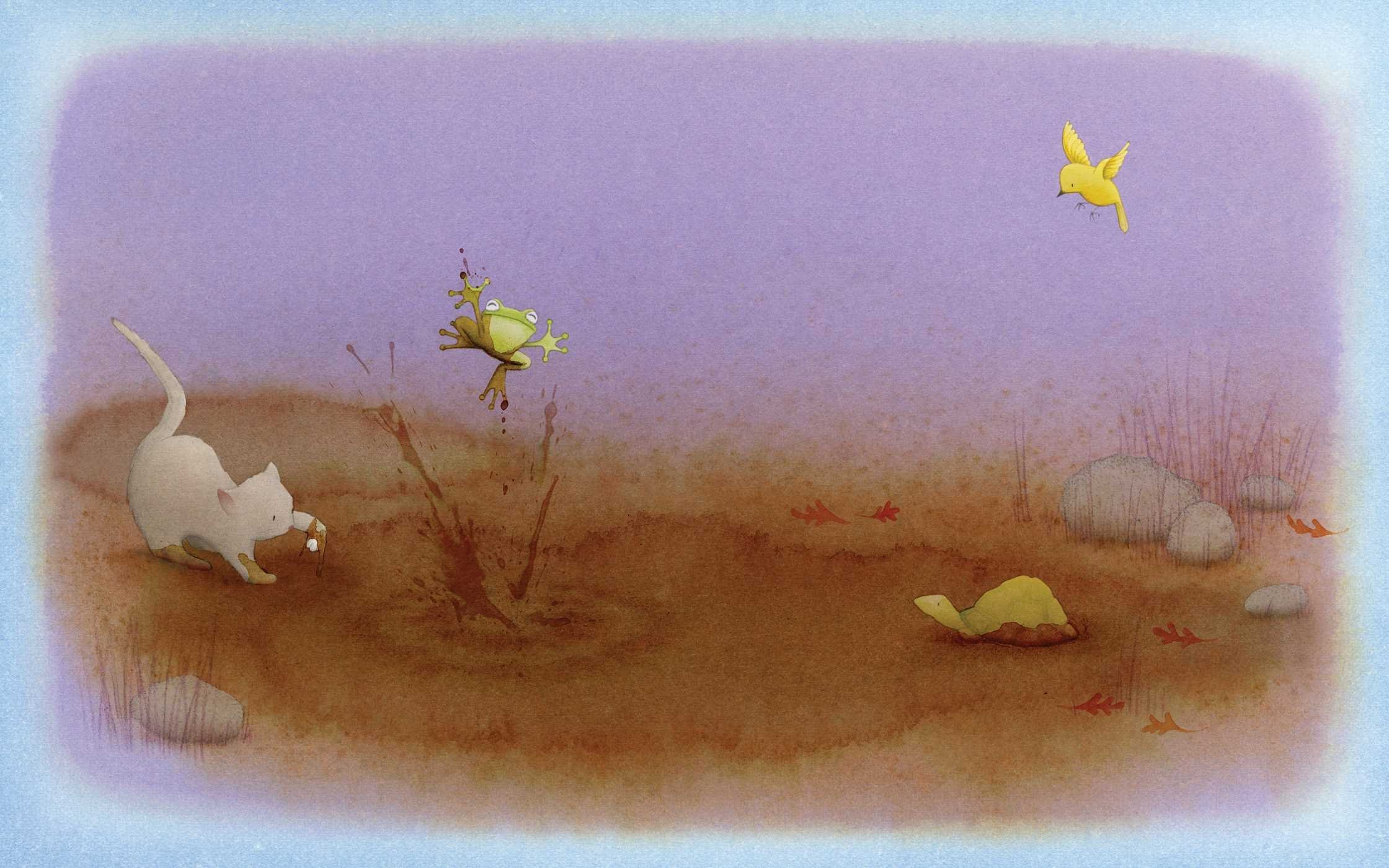 Summary:  The door was once a huge oak tree.  The stones were once underground.  The window was once sand that melted into glass.  A page of text and an illustration briefly explain where different parts of a house came from.  Each is followed by a two-page spread showing the materials in their original natural form.  A cat explores this outside world, meeting up with a bird, frog, turtle, and squirrel before coming back inside the cozy house.  The author’s note to readers tells about her New England home and asks, “Where do you live?  What was your home, once?”  40 pages; ages 4-8.

Pros:  The dreamy illustrations will get readers thinking about the building materials of their houses and how they connect to the natural world.

Cons:  Seemed like a cold night for the cat to be out of the house. 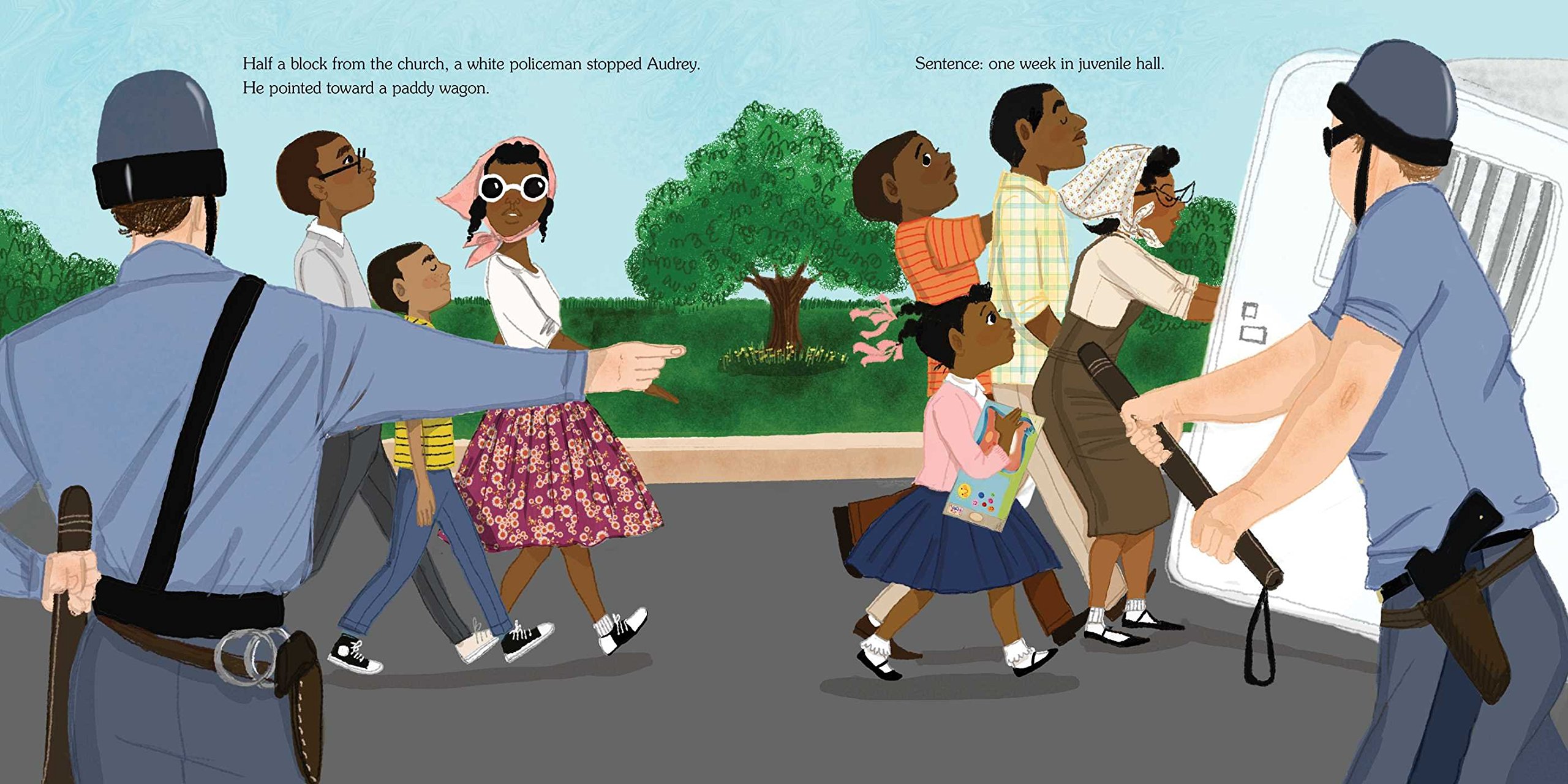 Summary:  Growing up in Birmingham, Alabama, nine-year-old Audrey Hendricks heard talk of civil rights marches from dinner guests Martin Luther King, Jr., Frederick Shuttlesworth, and James Bevel.  Audrey was eager to get involved, feeling the unfairness of having to use a dirty water fountain, getting worn-out books at school, and riding the freight elevator at the department store.  When Jim Bevel called on young people to “fill the jails” by protesting, Audrey eagerly signed up.  The youngest member of the march, she was quickly arrested with other kids and teens, and put in jail, where she stayed for a week.  With bad food, an uncomfortable bed, and mean guards, it was a tough time for Audrey, but she was proud when, on the fifth day, she learned there was no more room in the jail.  Their mission was accomplished, Audrey and the others were released, and two months later, Birmingham removed segregation laws from the books. Includes an author’s note giving more information about Audre, a timeline, and a recipe for the “hot rolls baptized with butter” that Audrey enjoyed for her first meal out of jail.  40 pages; grades 1-5.

Pros:  Cynthia Levinson draws on her research from We’ve Got a Job, her longer book on the Birmingham Children’s March, to tell this fascinating story for younger readers.  Kids will connect with Audrey and be inspired by her courage and positive attitude.

Cons: It’s pretty unbelievable that a nine-year-old spent a week in jail in 20th-century America.