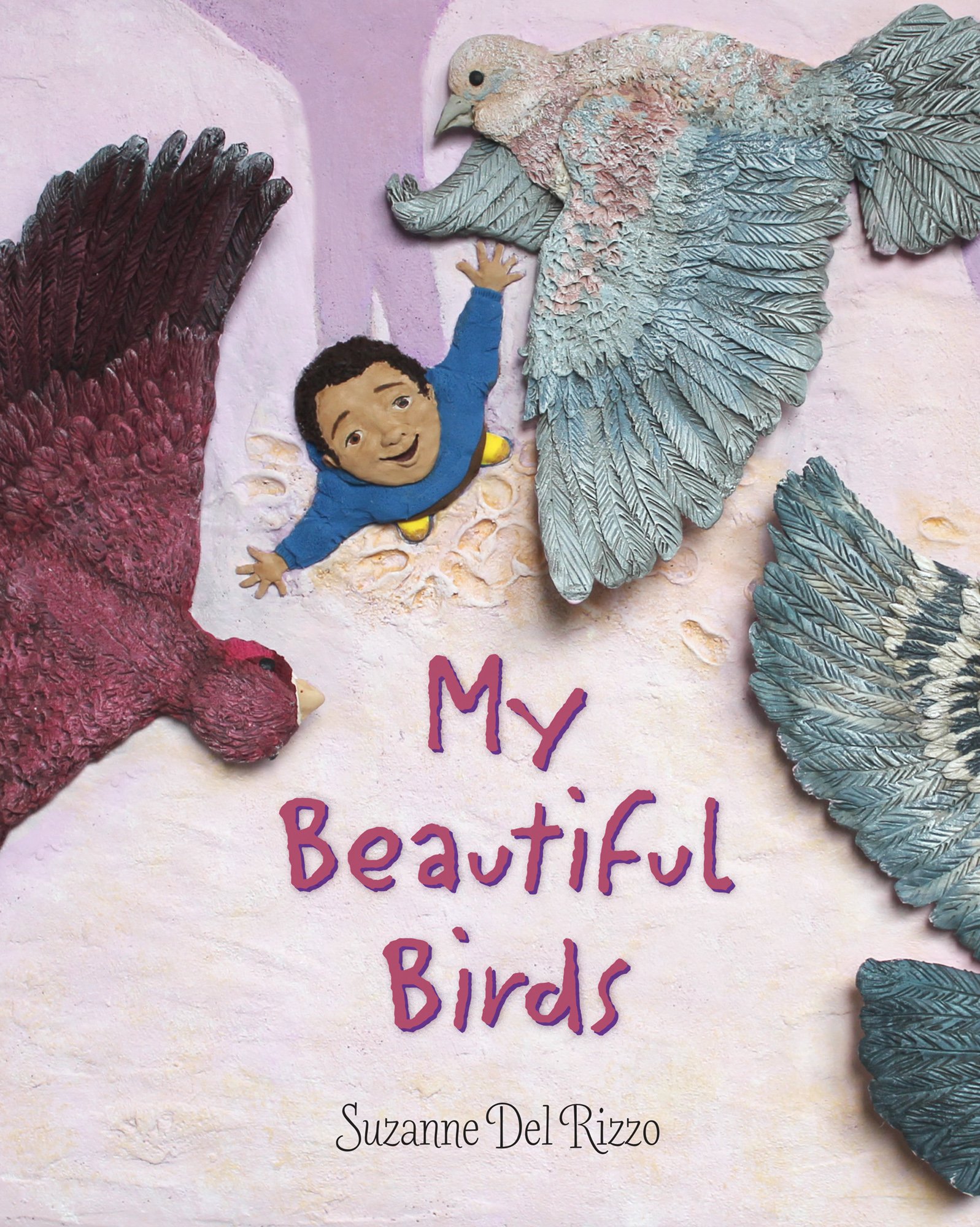 Summary:  Sami knows he is safe in the refugee camp with his family, but he can’t help missing his home in Syria and the pigeons he cared for there.  His memories of his village being destroyed by bombs scare him, and he has trouble joining the groups of children playing and going to school.  Slowly, he learns ways to manage his fears, and he is helped by the arrival of four birds that he adopts as pets.  Taking care of them helps him to focus on the positive things around him, and soon he is happier in his new home.  When he spots a new girl with tears in her eyes, he is able to reach out to her and offer his friendship.  An author’s note tells more about refugee camps where millions of Syrians have been forced to settle.  32 pages; grades K-4.

Pros:  A personal story about a contemporary crisis that gives readers a child narrator they can relate to.  The illustrations, created from polymer clay, are unique and eye-catching.  This would make a great introduction to a discussion of Syria and refugees.

Cons:  Life in the refugee camp appears to be more pleasant than it most likely is.

Summary:  Morris, the littlest mole in his family, is different than the others.  Instead of wearing the standard-issue mole work boots and hard hat, Morris prefers a dapper suit and bowler hat.  When the moles start to run out of food, their inclination is to dig deeper, but Morris decides to tunnel up.  He discovers a whole new world aboveground, and gets so distracted by all the wonderful things there that he doesn’t see the fox sneaking up on him.  Just as he’s about to become lunch, a hungry wolf comes along and the fox needs a hiding place. The little mole quickly digs a hole, the wolf goes away, and Morris is a hero.  The fox and his other animal friends gather a feast for Morris to take back to his brothers.  Back underground, the other moles are extremely grateful to Morris, who informs them, “I may be small, but I can do big things.”  40 pages; ages 4-8.

Pros:  Striking digital illustrations illuminate this tale that celebrates thinking outside the box.

Summary:  Mattie is generally a behind-the-scenes kind of girl, but when her favorite teacher Mr. Torres announces that the eighth grade play will be Romeo and Juliet, she decides to join her two best friends in auditioning.  She proves to have more talent than she’s given herself credit for.  Originally cast as Paris, she gets moved into a starring role when the boy playing Romeo drops out.  She slowly comes to terms with the fact that she has a crush on Gemma, the girl playing Juliet, and struggles with revealing her feelings to both Gemma and her best friends.  After some awkward rehearsals (those kissing scenes!), the play goes off without a hitch, and the final pages at a school dance reveal that Mattie and Gemma aren’t the only ones thinking about romance.  277 pages; grades 5-8.

Pros:  A sweet and funny school story with a coming-out twist.  Mattie is a sympathetic character who is fortunate enough to have supportive friends and family.  Theater fans will enjoy the narrative about putting on a play and might even be tempted to try some Shakespeare.

Cons:  The cover makes the girls look like they’re about 11, but the content is a little more mature.

Summary:  Birdie is an imaginative girl with the alter ego of Crafty Cat, a confident cat who is an amazing crafter and uses her crafts for good.  When Birdie drops her panda cupcakes on the way to school, they are ruined and she has nothing to offer for her classroom birthday celebration.  A call home for more treats is unsuccessful, and Birdie must use her own creativity to find a solution.  Crafty Cat saves the day, with a Panda Pals craft that the whole class loves.  Anya, the mean girl, gets her comeuppance, and Birdie declares it “a great birthday”.  A 10-page section at the end includes directions for four panda crafts and panda cupcakes.  128 pages; grades 1-4.

Pros:  Lots of fun for early graphic novel fans.  Birdie is a strong, resourceful, and funny protagonist, and the extensive crafting directions are an added bonus.

Cons:  The color palette is a little blah. 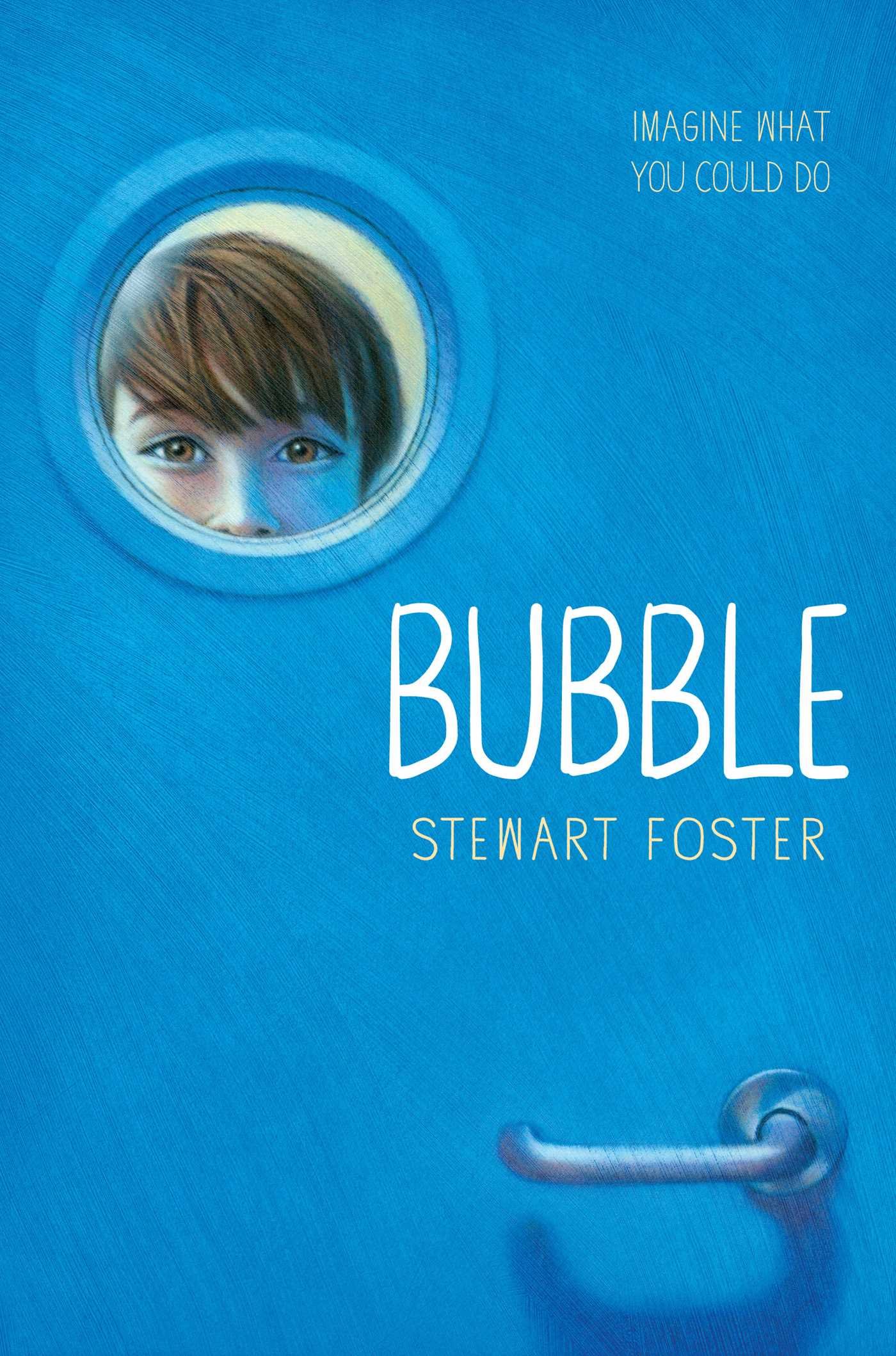 Summary:  “When the enemy bombed the library, everything burned.”  So begins the story, a boy forced to leave his home and flee with his family to another city far away.  His father brings along a book he had borrowed from the library, one that he had read many times and that he told Peter is “about our people, about us.”  His father protects this treasure as they travel, and when he dies, Peter carries it as far as he can, then buries it beneath a tree.  He moves to a new country, grows up, and eventually returns to his now-peaceful homeland, where he finds the tree, digs up the book, and takes it back to his village.  A new library has been built, and Peter places his father’s book back on the shelf to be loved by generations to come.  40 pages; grades 2-5.

Pros:  A timeless story about people preserving what’s of value to them, even in the most difficult times.  The beautiful watercolor and collage illustrations change from grays and browns to bright colors as Peter’s life becomes easier and his world turns into a brighter place.

Cons:  I think the cataloging on the old book would have to be updated before Peter sticks it back on the library shelf.

Summary:  In brief, rhyming text, a boy tells of his journey to Washington, D.C. to ride with his grandfather in the Rolling Thunder Ride for Freedom, a parade of motorcyclists held on Memorial Day every year to honor America’s veterans.  The focus is the Vietnam War, where Grandpa fought and lost friends.  The motorcyclists camp the night before, then get up at dawn to join the parade.  It winds past the Lincoln Memorial and ends at the Vietnam Veterans Memorial, where there are speeches and tears.  Finally, the boy and his grandfather sit in a field at the end of the day, watching a shooting star in the night sky.  A brief author’s note tells about the Thunder Ride.  32 pages; ages 4-8.

Pros:  Readers with interests in the military, history, or motorcycles will enjoy this; it would also make a great Memorial Day read-aloud (sorry I’m a little late…maybe Veterans’ Day?).

Cons:  The illustrations don’t reflect the diversity of those who served in Vietnam.

Summary:  Wallace and Grace are two owl friends and partners in the Night Owl Detective Agency.  Wallace is a careful rule-follower, and Grace is an enthusiastic go-getter, but each one appreciates the qualities of the other.  In this first installment, the two friends are hired by Edgar the rabbit to investigate a ghost-sighting in the kale patch.  Carefully gathering and clues and using a bit of logical reasoning, they are able to work together to uncover what’s going on.  Readers can look forward to a couple of sequels, as well as some similar series in Bloomsbury’s Read & Bloom imprint for newly independent readers.  80 pages; grades K-2.

Cons:  Wallace comes across as a bit of a stick-in-the-mud. 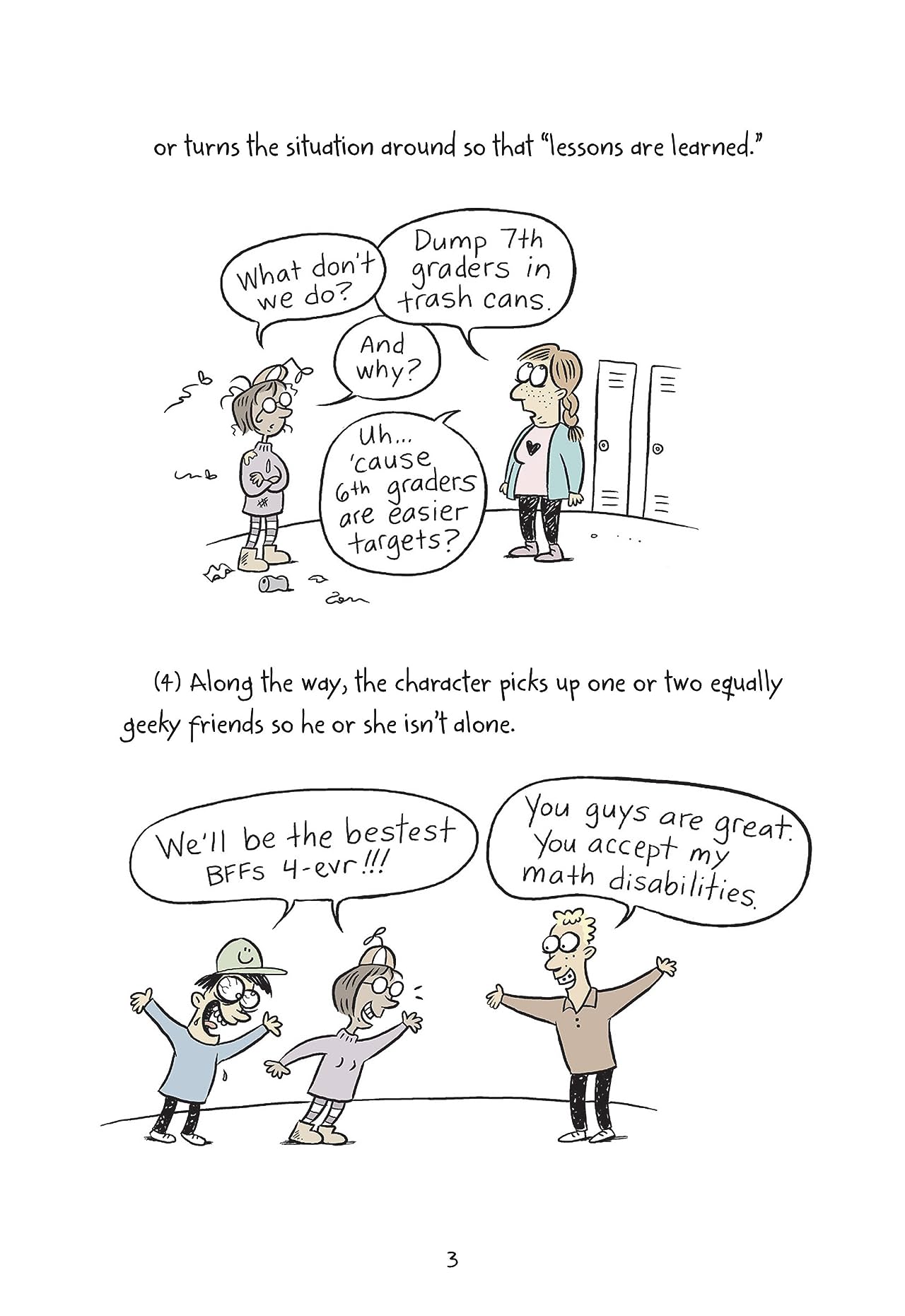 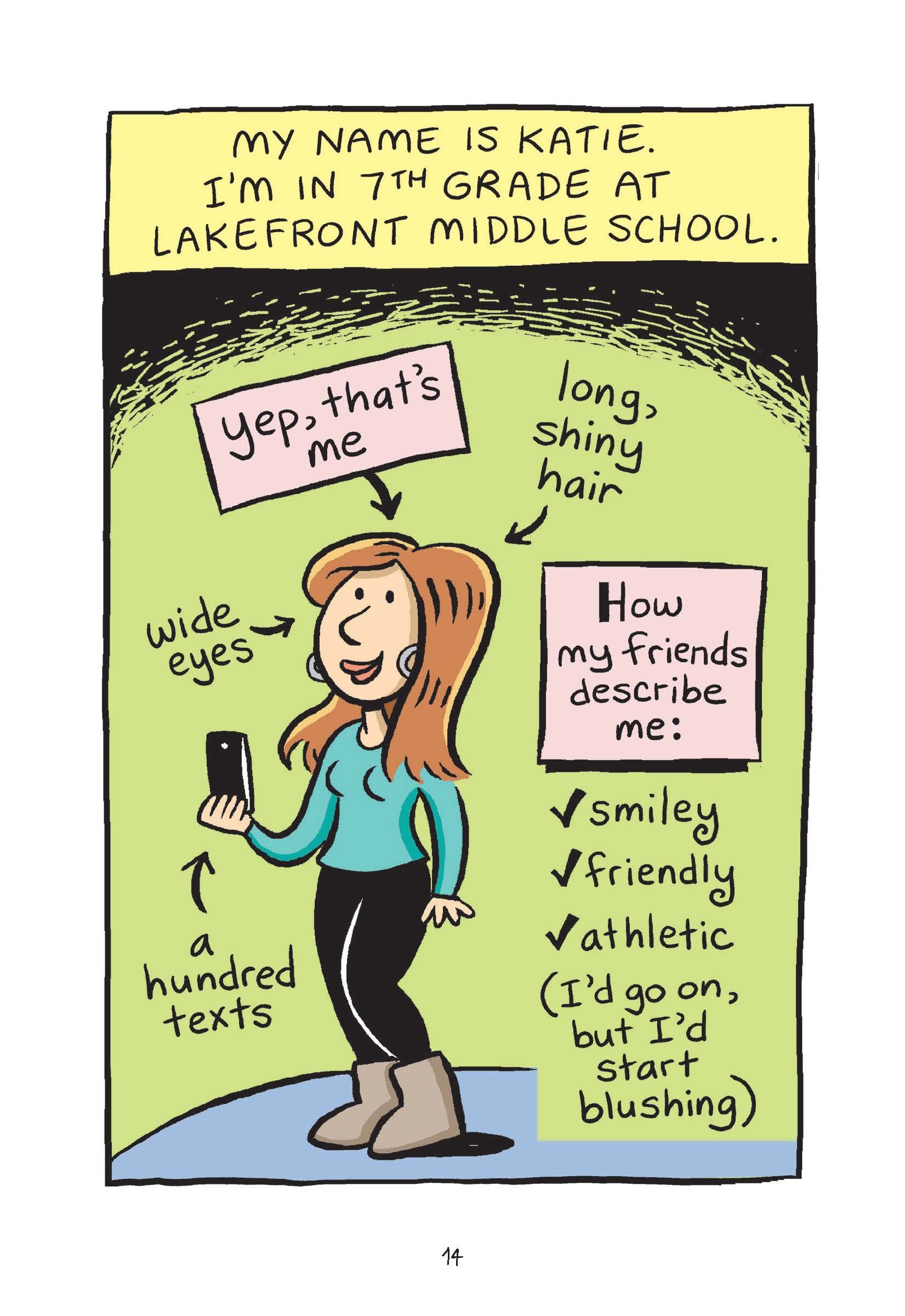 Summary:  Middle school is always difficult for quiet, shy Emmie, who only speaks to her best friend Brianna, walks through the halls with her head down, and hides by drawing whenever she can.  But one day stands out as particularly horrible.  At lunch, she and Brianna amuse themselves by writing over-the-top love notes to their crushes.  Emmie accidentally drops hers, and it’s discovered by insufferable class clown Joe.  He proceeds to tease and torture her for the rest of the afternoon, until Emmie feels like she has been reduced to a puddle of slime.  Interspersed with her story is a comic tale of Katie, a classmate who is pretty, popular, smart, and confident.  The two girls connect in a surprising way late in the day, and Emmie has a good last class that bodes well for the rest of her seventh grade year.  192 pages; grades 4-7.

Cons:  There were a few references (like Emmie referring to herself as an “oops baby”) that might raise an eyebrow for parents and/or teachers of younger readers.

Summary:  Eric, a.k.a. Frost, is part of a tight group of four friends (nicknamed Bench, Wolf, and Deedee) who have protected each other through two difficult years of middle school.  When cellphones are banned at the beginning of eighth grade, he and his friends begin leaving notes on Post-Its.  Before long, these sticky notes are appearing on lockers and backpacks all over school, some silly, some wise, and some hurtful.  At the same time, a new girl, Rose, starts hanging out with the guys, causing a shift in the group dynamics.  Bench deserts them for another lunch table, and Deedee and Frost are the victims of a vicious bully who may or may not be one of Bench’s new friends.  Rose heroically comes to their rescue, but even she can’t protect them when the bully comes after Wolf.  The kids learn the power of words to hurt and to heal and the many varieties of friendship as they muddle their way through their final year of middle school.  384 pages; grades 5-8.

Pros:  A powerful and realistic friendship story that is unflinching in its portrayal of the social hierarchy of middle school.  This is sure to be a popular choice for readers, as well as teachers looking for interesting class discussions.

Cons:  Some language and some details about the bullying incident may make this more of a middle school book than an elementary one.