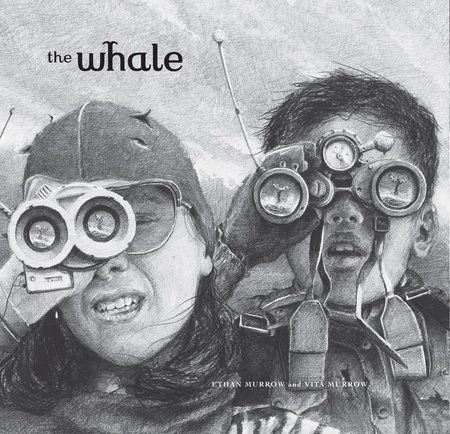 Summary: Adele Scarsez never wanted to be ordinary. As a young woman she tried dancing and acrobatics, but they didn’t quite satisfy her desire to entertain and thrill audiences. Traveling to America, she met a young magician named Alexander Herrmann and asked him to marry her. He agreed, and Addie found her true calling as Adelaide Herrmann, magician. She performed as his assistant for many years. When he died, she knew she needed a way to keep the show going. Addie decided to learn the bullet-catching trick, a bit of magic so dangerous that magicians had been killed performing it. However, Addie succeeded, and her show continued for many years. An author’s note at the end tells a bit more about Addie, as well as how Mara Rockliff uncovered her story. 48 pages; grades 1-4.

Pros: The team that produced last year’s Mesmerized returns with another tour de force. The story is fascinating, and the illustrations and overall design of the book, with text in a variety of fonts woven in among the pictures, make this a visual feast.

Cons: I would have liked to have understood the bullet-catching trick while reading the story instead of having to go to the website given on the last page to get a description of what it was.

Summary: A hot-air balloon ride gone wrong lands Oliver, Mya, and Jorge on a mysterious island inhabited by dodo birds and Vikings. The dodos are entertaining and companionable, the Vikings, not so much. Not only are Erik the Red and his band after the kids, but Octavian, the balloon’s pilot, wants the magic map they took from him. After a daring prison break and a series of exciting chase scenes, the three children manage to outwit them all and sail off in a Viking vessel. The trip home promises an exciting sequel. 112 pages; grades 1-4.

Pros: This graphic novel is based on the Poptropica website, a gaming site co-founded by Diary of a Wimpy Kid creator Jeff Kinney. All the kid-friendly elements are in place to make this a surefire hit with even reluctant elementary readers.

Cons: Is it really okay to have a positive Jeff Kinney blurb on the front cover a book based on a website he helped create?

Summary: Little Dee is getting tucked in for the night when her park ranger father gets an emergency call. The next time we see her is at her father’s funeral, when she is spotted by animal friends Ted (bear), Blake (dog), and Vachel (vulture). At about the same time, they’re joined by a penguin named Paisley, who has wandered away from his family in Antarctica and is being chased by two polar bears who want him for lunch. Reluctantly, the three friends agree to both save Little Dee from the cold, cruel orphanage and take Paisley back to Antarctica. Their journey takes them to Mexico, Ecuador, and Chile, with plenty of adventures and a few more interesting characters along the way. 128 pages; grades 3-6.

Pros: Originally a webcomic, Little Dee is great fun. Although she herself doesn’t talk, her animal friends more than make up for her silence with their nonstop banter. There’s plenty of snark and sarcasm, but also a good deal of friendship and caring. The illustrations are bright and colorful and will appeal to fans of Bone and Raina Telgemeier.

Cons: Some of the funnier sarcasm may go over the heads of younger readers.

Summary: St. Edith’s is an all-girls’ school. Several years ago, the administration tried an experiment to go co-ed, but it failed miserably. When the school returned to its single-sex status, the boys who were already enrolled were allowed to stay, but one by one, they have transferred to other schools. On the first day of seventh grade, Jeremy Miner gets the news that the last boy besides himself has left the school. Now he is the sole boy among 475 girls. His single mother works at the school and gets free tuition for him and his two sisters, and she dislikes the local public school, so he is stuck. His friend Claudia comes up with an idea—stage a series of pranks so he will get kicked out of school. Jeremy’s basically a good kid, and the idea of pranks makes him uncomfortable, but he’s desperate. He makes up some rules, though: nobody gets hurt or humiliated, nothing gets broken or is permanent. But try as he might, he can’t stick to those rules, and permanent damage is done, both to the school and some of its students. Jeremy starts to think there may be worse fates than being the last boy at St. Edith’s…but is he in too deep to turn back? 272 pages; grades 4-7.

Pros: The characters are engaging and likeable and the premise is an interesting one. The pranks and consequences seemed quite realistic, and Jeremy’s dilemmas could make for some interesting discussion.

Cons: I don’t know what could have been done differently, but given such a fascinating premise, it seemed like the plot never really quite took off as much as I was hoping it would.

Summary:  Seventh-grader Nick loves soccer.  It’s the only thing that keeps him happy when his parents split up and a couple of bullies steal his bike.  It’s a dream come true when his team gets invited to the youth soccer tournament Dallas Cup, but in a final game before they go, Nick is sidelined by both injury and illness.  While recuperating in the hospital, he comes to value his friends Coby and April, the quirky but caring librarian from his school, and most of all, his parents, imperfect though they may be.  By the end of the book, Nick and his family are moving toward a new normal and learning to appreciate and accept each other.  320 pages; grades 6-10.

Pros:  This book in verse looks like a sequel to Kwame Alexander’s Newbery Award-winning The Crossover, but it’s a whole new cast of characters and story.  The short poems and engaging story make the 320 pages fly by. It’s likely to have great appeal for reluctant middle school readers, boys and girls alike.

Cons:  The story, and especially the language, isn’t as sparkling as The Crossover.

Summary: Mira is an artist. She loves to draw what she sees around her, and give her pictures to family, friends, and neighbors. One day, a man comes to her neighborhood who loves art as much as she does. He starts to paint murals around the community, and he invites Mira and her neighbors to join him. The bright colors are like magic, and when the murals are done, the painters don’t stop. They paint sidewalks, utility boxes, and benches. The man who started it all unites everyone with a wave of his paintbrush. Pages at the end tell about Rafael Lopez, who is both the man in the story and the illustrator of this book, and how he transformed San Diego’s East Village, and has since moved on to other communities around the world. 40 pages; ages 4-8.

Pros: An inspiring true story about one man who made a difference. Not only did he beautify his own community, but his work has raised money to help talented artists get more education, and his movement has spread around the world. His illustrations convey the magical transformations of his art, and should put Lopez in contention (again) for some Caldecott recognition.

Cons: I would have loved to have seen more photos of the real murals and other artwork.

Summary: Penguin is in a bad mood. He doesn’t know why, and he doesn’t care. When he gets home, he slowly gets undressed. First he takes off his grumpy coat and grumpy boots, but he still feels grumpy. Then it’s his grumpy socks. No change. Finally, when all his grumpy clothes are off, he counts to three, and slides into a nice cold bathtub where he can splash and play. His favorite pajamas and a cup of hot chocolate take away the last vestiges of grumpiness. He goes to bed, knowing that he will wake up to a happy new day. 32 pages; ages 3-6.

Pros: Simple text and illustrations will help kids understand and deal with changing emotions, aided by a very cute penguin.

Cons: The appearance of heart-covered red underpants may distract kids from the more important lessons of this story. 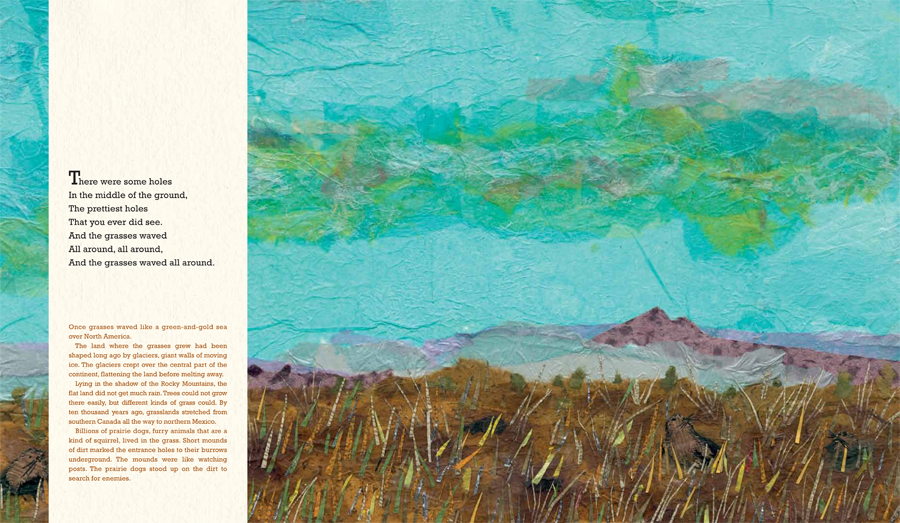 Summary: Prairie dogs are what is known as a keystone species–an animal that, through its activities, helps many other plants and animals survive. When people moved into the prairie dogs’ habitat and started using it as farmland, many other species were affected as well. The tale is told both through a song based on “And the Green Grass Grew All Around” and a more detailed description of how the prairie dogs once lived, the other animals that were part of the grasslands, and how that habitat has changed. The final few pages explain how the work of the Janos Biosphere Reserve in Mexico is helping to restore grasslands and the animals that make them their home. 40 pages; grades 1-5.

Pros: The beautifully colored and textured cut-paper illustrations illuminate the information-rich text about this endangered habitat and the many varied species that live there.

Cons: While the song is written in a good-sized font, the rest of the text is a bit on the small side.

Summary:  Max’s parents have recently separated, and now Max spends every weekend with his dad at his new apartment.  At first, the new place feels unfamiliar, and Max’s dad isn’t always tuned in to what Max likes in terms of room decor or activities.  But Dad is a good listener, and eventually he gets things right.  He takes Max on adventures to explore his new city, but again, he lets Max take the lead in terms of pace and direction.  As the weeks go by, Max gets to know the neighbors, and to feel comfortable enough to invite his best friend for a sleepover.  By the final page, Max has realized he now has two homes, and that he feels happy and safe in each one.  160 pages; grades 1-4.

Pros:  Max and his dad are likeable, yet realistic characters.  I loved how Dad kept pretending he wasn’t sick the weekend of the sleepover…so like a parent to keep soldiering along, even when you can barely stay awake!  The gradual pace of Max’s adjustment felt natural.  Both parents and children of divorce would benefit from reading this book.

Cons:  160 pages is a bit long for those readers just transitioning to chapter books.  The book is divided into three parts, so some may want to just try part 1 before deciding whether or not to tackle the whole thing.