As September turns into October and the real work of the school year begins, these books can help remind kids that there actually is joy and fun in reading and writing:

Rufus the Writer by Elizabeth Bram, illustrated by Chuck Grosnink.  Published by Schwartz and Wade.

Instead of a lemonade stand, Rufus sets up a story stand, and writes custom-made stories for all of his friends.  The writing process is fun, but the best part is sharing his gifts at the end of the day.

Billy’s Booger: A memoir (sorta)  by William Joyce and his younger self.  Published by Atheneum Books for Young Readers.

Okay, I acknowledge the title might be off-putting if you’re over the age of nine, but this is actually a good story about young William Joyce’s first writing attempt.  His story didn’t win the library writing contest, but it was the book all the other kids wanted to read.  And that felt almost as good as winning.

A Poem in Your Pocket by Margaret McNamara, illustrated by G. Brian Karas.  Published by Schwartz and Wade.

While the other kids are having fun experimenting with poetic forms, Elinor is stressing about writing the perfect poem.  When a poet comes to school, only Elinor has nothing to share.  The poet gets her on stage, and together they write a poem that shows Elinor there’s no such thing as perfection in writing.

How to Read a Story by Kate Messner, illustrated by Mark Siegel.  Published by Chronicle Books.These ten steps for how to read a story will make you want to grab a book and a friend and try them right out.

Published by Feiwel and Friends

Summary: Olivia lives with her aunt, uncle, and two cousins. Her father has a mysterious job—Olivia thinks he’s an archaeologist—and sends big checks for her support to her aunt and uncle. One day at school, Annabelle Jenkins threatens to beat up Olivia at dismissal time. The fight is just starting up when Olivia is suddenly rescued by Princess Mia Thermopolis of Genovia and whisked off in a limousine. Turns out Olivia and Mia are half-sisters, their father is king of Genovia, and Olivia is a princess! She learns that royalty has its ups and downs, but the best part of her new life is finally being part of a family who truly loves her. After a few bumps in the road regarding her custody, the last chapter finds her happily reporting from her grand new home in Genovia. Grades 3-6.

Cons: Being a huge fan of Meg Cabot’s Allie Finkle series, I was a little underwhelmed by the plot and characters in Olivia’s story.

Summary: Fifth-grader Tamaya and her seventh-grade neighbor Marshall always walk home from school together. One day Marshall, fearing he is about to be beat up by classroom bully Chad, tells Tamaya he knows a shortcut through the woods. Chad finds them anyway, and when he attacks Marshall, Tamaya scoops up some mud and throws it in Chad’s face. Unbeknownst to any of them, it’s “fuzzy mud” crawling with ergonyms created by an eccentric inventor looking to create a biofuel to replace gasoline for cars. The microscopic creatures multiply, slowly eating away the flesh on Tamaya’s hand and Chad’s face, and before long, an epidemic threatens their town. Sachar inserts Senate testimony on the disaster to give a larger perspective on the issue. Grades 4-8.

Pros: Michael Crichton for kids.  A real page-turning adventure, with several different layers, including questions about overpopulation, dangerous science, and doing the right thing. Readers will enjoy the fast-paced story and also find plenty to discuss.

Cons: While I love a happy ending, the denouement felt a little too quick and easy. On the plus side, I  got to use the word “denouement”.

Summary: It’s tough to lose your balloon…but it’ll make Grandma smile when it floats past her airplane. It’s sad to drop your sandwich in the sand…but it’ll make some seagulls very happy. Jarrett Krosoczka looks at some tough childhood situations, and then turns them around to find the silver lining. His final advice? When life gives you rain…look for the rainbow! Ages 3-7.

Pros:  A good lesson in resiliency, something modern children are said to lack. It could be used as a writing prompt: think of a time something difficult happened and how you turned it into something positive.

Cons: As a child, the idea of my balloon floating up to the sky freaked me out. The cover of this book brought that all back.

Summary: Is Monkey ready for kindergarten? Well, he knows the alphabet and he can count to 12, but he’s still not sure. His parents take him shopping for a lunchbox and new sneakers, and his brother assures him that kindergarten is so much better than preschool. A few days before school starts, Monkey has a playdate with some of the kids from school, and it’s pretty fun. But the questions remain: what if his teacher doesn’t like him? What if there are no red crayons? What if he can’t find the bathroom? Finally, the big day arrives, and Monkey’s parents drop him off. Ready or not, Monkey is off to kindergarten. The last two wordless pages show a happy Monkey at work and at play in kindergarten. Ages 3-6.

Pros: This simple story will be reassuring to kids starting school. The illustrations and text look like they were done by a young child.

Cons: Mom and Dad Monkey are flirting a bit with the “helicopter parent” line.

Summary: After a female emu helps build a nest and lays eggs, her responsibilities are done. It’s up to the male to sit on the eggs for eight weeks, not even leaving to eat or drink, then to take care of the young hatchlings for over a year until they are ready to look for mates of their own. The Australian author-illustrator team that produced last year’s Red Kangaroo follows the life of a male emu as he waits on the nest, welcomes the new babies, and teaches them to fend for themselves. The text is written in two different fonts; one could be read aloud while the other gives additional related facts and information. A brief author’s note and index are included at the end. Grades K-3.

Pros: Sure “emu” is a good Scrabble or Boggle word, but there’s lots more to the world’s second largest bird.  One of the lesser-known Australian animals, it is nonetheless fascinating, and Emu has a lot of information for a picture book. The illustrations are unusual but striking and complement the text well.

Cons: I wasn’t crazy about the color pallet used for the illustrations.

Summary: Olive and Beatrix are twins, but not quite identical. Beatrix was born at exactly midnight when there was a full moon, so naturally, she’s a witch. Olive, the narrator of this story, was born a few minutes later, so is just an ordinary girl. One day Olive and her friend Eddie, a budding scientist, decide to play a trick on Beatrix involving a large number of spiders. Unfortunately, the spiders get into Beatrix’s growing potion, then head outside. The three kids have to round up the oversized spiders and use Beatrix’s magic to get them back to the normal size before they’re discovered by their parents. Ages 5-8.

Pros: Another entry from Scholastic’s Branches books. The sisters have a close bond, with the witchy magic twist adding a bit of extra interest. Much of the dialog is in the form of cartoon bubbles which, combined with plentiful illustrations, make this a manageable first chapter book.

Inspired by the success of Cece Bell’s El Deafo and Raina Telgemeier’s Smile and Sisters, there are some great graphic novels featuring girls this year.

The title says it all.  Peppi and Jaime literally run into each other on the first day of middle school, then spend the first half of the book agonizing over how to become friends.  Perfectly captures those tough middle school emotions, with a realistically happy ending.

Nathan Hale’s latest Hazardous Tale is girl-powered by Harriet Tubman.  The compelling story of the Underground Railroad’s most famous conductor.

Sunny Side Up by Jennifer Holm, illustrated by Matthew Holm.  Published by Graphix.

It’s 1976, and Sunny’s unhappy to be suddenly forced to spend the month of August with her grandfather in Florida.  Flashback scenes reveal the family crisis that has led to her trip. Brother-and-sister team Jennifer and Matthew Holm team up for this family drama/comedy based on their own childhood experiences.

Astrid’s having best friend problems as she gets ready to middle school, but a summer of roller derby camp gives her new friends, increased self-confidence, and about a thousand bumps and bruises.  My personal favorite

When Masha sees an ad for Baba Yaga’s assistant, she recalls her grandmother’s old stories about the witch and decides to apply.  Through skill, luck, and a little magical talent, she manages to prove herself worthy of the job while at the same time healing some of her difficult family relationships.

Summary: The Civil War is over, and Gabe wants to find his mama. She was sold by his master when Gabe was so young that all he can remember of her is her smell of jasmine, her good cooking, and the scarf she wore to cover up a scar she received as a punishment for trying to escape. For the first time in his life, Gabe is free to travel away from the plantation where he was a slave, and he sets off to find Mama. For months, he travels through the south, meeting other newly-freed slaves, following leads, and enduring crushing disappointments. One day, he sees a woman setting pies on the windowsill of a hotel, her long scarf trailing behind her. That night, he sleeps snuggled against his mama, hoping other boys will be as fortunate as he has been. Ages 8-12.

Pros: Told in Gabe’s distinctive voice (“Had me thinner than a leaf with the sorrow of it”), this story fills a gap in historical fiction picture books with its narrative about Reconstruction. The author’s note tells how Gabe’s story is representative of many newly freed slaves who sought to reunite with loved ones.

Cons: The history of the Civil War and the Emancipation Proclamation aren’t told here, so kids will need some background to understand Gabe’s story. 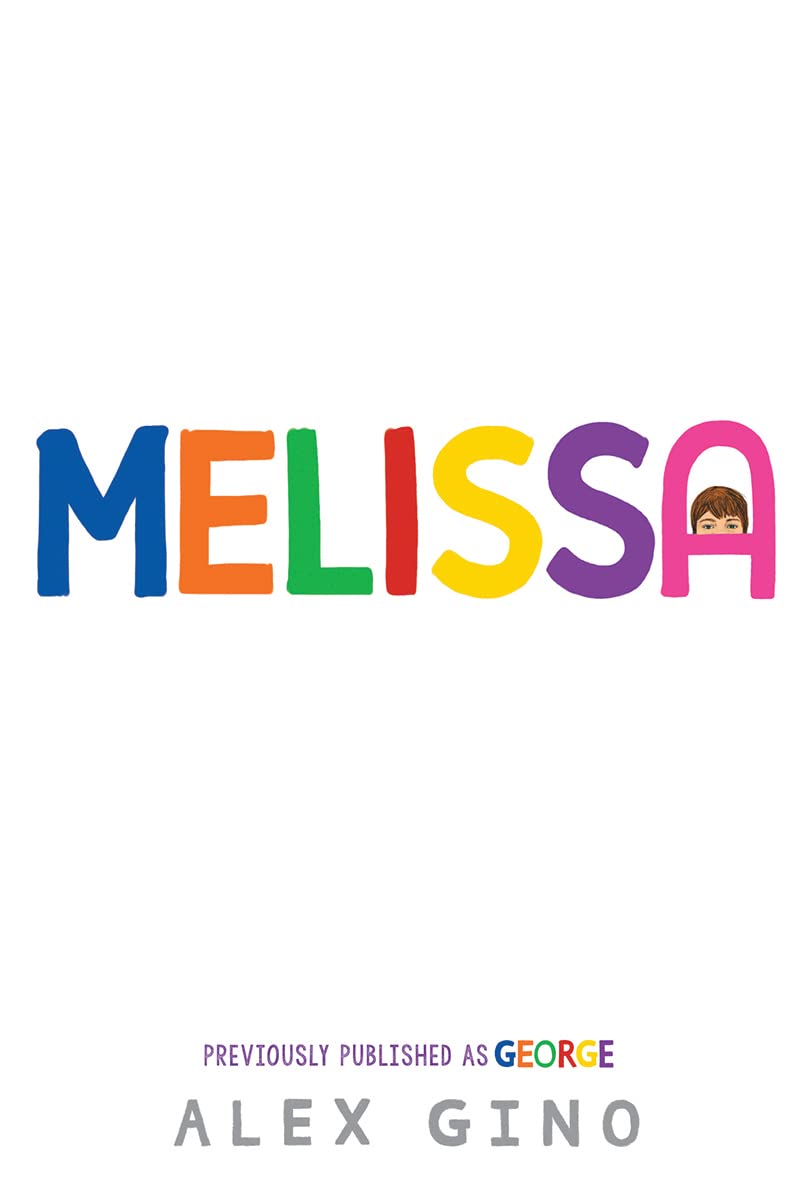 Summary: George has a boy’s body, but she’s always felt she is a girl. She has a secret stash of magazines like Seventeen that she pores over to learn more about girls’ clothes, makeup, and lifestyles. Her fourth grade class is doing a play of Charlotte’s Web, and more than anything, George wants the part of Charlotte. Coached by her best friend Kelly, George decides to try out for Charlotte, but her teacher takes her audition as a joke and instead gives the part to Kelly. As a result of this painful experience, George finally comes out to Kelly, who hatches a plan to allow George to be Charlotte in one of the performances. Reactions to George in this clearly feminine role are mixed, but strong, and ultimately lead to a greater understanding of George by her mother and older brother. While there are no easy answers for George, the book ends on a hopeful note. Grades 4-7.

Pros: Whatever a reader’s views on transgender kids, this book makes a powerful statement about the importance of gender to personal identity, and how narrow society’s definition is on what is masculine and feminine. George would make an interesting read for educators  trying to create schools that are safe and comfortable for all students.

Cons: George addresses a controversial topic, and there will undoubtedly be those who feel it doesn’t belong in an elementary classroom or library.