I’ve recently signed up with the Amazon Affiliate program, and will be including a link to Amazon at the bottom of each review.  I’ve added links to my last four reviews, and hope to (eventually) add them to other previous reviews.  If you click on the link, then buy the book from Amazon, I get 4% of the sale.  Blog design is not my specialty (I’m sure you’ve noticed), and I’m sure there’s some more aesthetically pleasing way to incorporate this link, but this is my best attempt for now.  I’m still learning about this process, so if anyone has any helpful hints, I’d appreciate them.  Please feel no obligation to shop through my blog, but if you are planning to buy a book, thanks for clicking on the link!

Summary:  Hilde is a young detective and reporter who has started her own online newspaper, The Orange Street News, about events in her neighborhood.  When she hears about a break-in, she jumps on her bicycle to find out more.  A trail of clues leads her to a series of people who have had a baked good stolen…and right on the morning of the big Bake-Off Bonanza!  Hilde’s reporter father has trained her to look for the who, what, where, when, how, and why, and she doesn’t give up until she’s found the answer to each one of those questions.  The mystery isn’t solved until she’s at the Bake-Off itself, and it’s a determined little black dog who finally leads her to the culprit.  Includes information about the real Hilde, who wrote this book with her father, and a preview of book #2.  96 pages; grades 1-3.

Pros:  Fans of Cam Jansen and the A to Z Mysteries will enjoy this new series, particularly when they find out it was written by someone their own age.  Hilde is smart and determined, and she and her older sister work well together with a refreshing lack of sibling rivalry.  Another successful early chapter book series from the Scholastic Branches imprint.

Cons:  All the teenagers in the book are portrayed as nasty and obnoxious (giving you a clue about the “who” in the mystery.)

Summary:  Auma dreams of attending high school on a track scholarship and eventually becoming a doctor.  She’s at the top of her class, the fastest runner on the track team, and her father is earning good money in Nairobi to help his wife and four children back in their small Kenyan village.  One day he returns home unexpectedly, though, and before long, it’s clear he is too sick to work.  Like so many other adults in Auma’s village, her father wastes away and eventually succumbs to a mysterious disease.  Eventually, Auma learns more about AIDS, the disease that takes her mother within a year of her father’s death.  Determined to escape this fate herself, she refuses the marriages her grandmother tries to arrange, and gets a scholarship to one of the best high schools in her province.  After a year at school, though, her younger siblings are malnourished and doing poorly academically.  Auma decides to take time off from her own studies to work in Nairobi.  The story ends with her on the bus to the city.  Although her dreams have been deferred, it’s obvious she is determined not to let go of them completely.  An author’s note tells of her childhood in Kenya and current work with HIV/AIDS orphans in that country.  304 pages; grades 6-8.

Pros:  An inspiring story of Auma’s courage and strength to overcome incredibly daunting obstacles including poverty, disease, and a society that does not value girls and women.  Readers will learn about a world that is very different than most of their experience, and will come to have a better understanding first world problems versus third world ones.

Cons:  Some reviews recommend this starting at grades 4 and 5, but I would be hesitant to put it in my elementary library.  Auma thwarts a would-be rapist, and there are some pretty detailed descriptions of the sexually-transmittable aspect of AIDS. 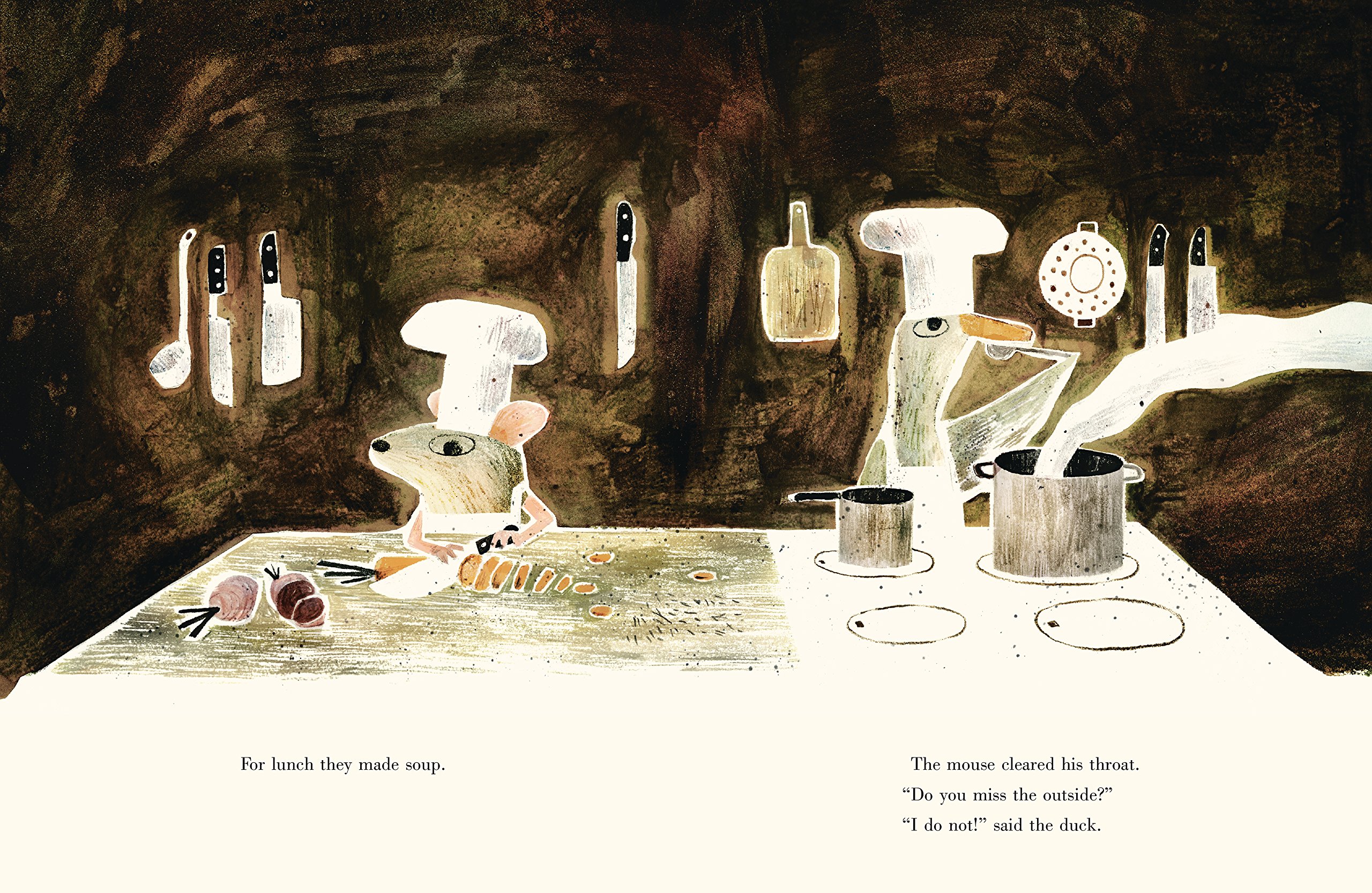 Summary:  On page 1, a mouse meets a wolf.  On page 2, the wolf eats the mouse.  End of story, right?  Of course not…turns out life inside the wolf is pretty good.  A duck has already set up housekeeping there, and is living the good life, no longer afraid of being eaten.  “I have been swallowed,” says the duck, “but I have no intention of being eaten.”  The two celebrate with feasting and dancing.  Good for them, not so great for the wolf, who gets a terrible stomachache.  Then one day, a hunter is after the wolf.  Just when it looks like it’s all over for him, the two friends pop out and save his life.  To show his gratitude, the wolf lets them stay, willing to put up with the pain.  And that is why, every night, the wolf howls at the moon.  40 pages; ages 4-8.

Pro:  Another quirky and inspired tale told by Mac Barnett and illustrated with a brown and gray palette by Jon Klassen.  Like the wolf with the mouse, kids will eat it up.

Cons:  Personally, I’m not a huge fan of this duo; I’m generally scratching my head by the last page.  But I love reading them to kids, because there’s always an enthusiastic response.

Summary:  On September 11, 2001, as people were struggling to evacuate the Twin Towers, some were led out by a young man with a strong, clear voice and a red bandanna over his face.  Although he helped many people to safety, he himself did not survive.  This book tells the story of Welles Crowther, a 24-year-old Wall Street trader who had worked as a volunteer firefighter, and was considering a career change to FDNY.  From a young age, Welles was fascinated with firefighting, and was a compassionate and exuberant boy who often helped his friends.  He always carried that red bandanna, and it later helped identify him, allowing the survivors he helped to connect with his family.  A feature on ESPN spread his story around the world, and continues to remind others to follow Welles Crowther’s inspiration to help.  176 pages; grades 5-8.

Pros:  Keep the tissues handy for this moving story of a young man whose brief life has touched many, many others around the world.

Cons:  “Bandanna” just looks wrong, but apparently “bandana” and “bandanna” are both correct.

Summary:  When Nolan and his younger sister Olivia receive a package containing an antique crystal radio set, they’re unsure about how it works.  They try twisting dials and flipping switches, and before they know it, they have conjured up Benjamin Franklin from the year 1789.  Ben is quite taken with the 21st century, and insists on going on a tour to see how some of his creations, like the public library and fire station, are faring.  Along the way, he shares stories from his life, told in comic book style.  People are startled, but charmed, by the eccentric old man wandering around town with the two children, and Franklin thoroughly enjoys himself until he starts contemplating the possibility of never seeing his 18th-century friends and family again.  Nolan, who is dealing with an absent father, is sympathetic and finds a way to send his new friend back home.  Billed as Book 1 in the History Pals series, the illustration of the radio offers some hints about what other times in history are planned for the rest of the series. Includes a 10-page section at the end with more information about Franklin, including a bibliography and websites.  272 pages; grades 2-5.

Pros:  Readers won’t realize they’re getting a dose of history education in this fast and funny tale.  A large font, plenty of illustrations, and frequent comic book page inserts make this a good choice for reluctant readers.

Summary:  Eleanor is ready for a fun day at the beach, but her little dog Sukie isn’t so sure.  For everything that Eleanor proposes–going to the beach, chasing a beach ball, swimming–Sukie has a long list of worries, always ending with a concern about lobsters.  When Eleanor jumps in the ocean, Sukie sits at the water’s edge with her favorite stuffed monkey, Chunka Munka, and watches.  But when a rogue wave catches Chunka Munka and carries him out to sea, Sukie forgets her fears and dives in after him.  She even swims past something that might be a lobster to make the rescue.  Back ashore, Eleanor tells Sukie she knew she could do it.  The friends spend the rest of the afternoon playing in the sand, eating ice cream, and watching for lobsters.  32 pages; ages 4-8.

Pros:  A fun summer story (sorry to be reviewing it in October) about overcoming your fears.  Sukie is adorable, and Chunka Munka is pretty cute too.