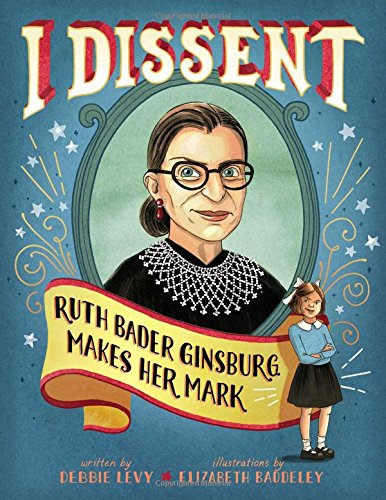 Summary:  Growing up in the 1940’s, Ruth Bader noticed many prejudices and injustices.  There were hotels and restaurants that banned her family because they were Jewish.  Girls weren’t expected or encouraged to do many of the things boys could do.  Even as a left-handed person, Ruth faced discrimination, getting a “D” in penmanship when she was forced to write with her right hand.  Ruth’s mother took her to the library and encouraged her to get an education; although she died the day before Ruth’s high school graduation, Ruth persisted and went to college and law school.  Overcoming the difficulties of being hired as a female lawyer, she eventually became a law professor, then a judge.  In 1993, Ruth Bader Ginsburg was appointed to the Supreme Court.  Throughout her career, up to the present day, she has fought for the rights of those who experience discrimination.  Now the oldest member of the Supreme Court, there are those who think it’s time for her to retire.  Ruth Bader Ginsburg dissents.  Includes an extensive author’s note with additional biographical information, notes on the Supreme Court cases mentioned in the text, and a bibliography.  40 pages; grades 1-4.

Pros:  The first picture book about this woman who continues to inspire.  Building Ruth’s story around her experiences with discrimination and passion for justice gives the story a good focus.  The illustrations add a bit of humor and incorporate some of the text into the pictures.

Cons;  Those whose politics don’t match Ginsburg’s may disagree with the way some of the Court cases are described.