Summary:  Stuffed animals Mama Lion and Tigey are ready for the big car race, going up against such stiff competition as Bun Bun, the Flying Pandinis, and the Knitted Monkeys.  When the flag waves, they’re off, and Mama Lion and Tigey take the lead.  Losing a wheel sets them back, though, and they’re grateful when the Pandinis take a break from the race to help them.  They enter once again, and the race becomes closer than ever as they approach the finish line (with the Knitted Monkeys trying a few unscrupulous tricks to win).  The finish proves perfect for everyone, as Mama Lion and Tigey learn that winning isn’t always the most important result.  56 pages; ages 4-8.

Pros:  Jon Muth takes a break from his Zen picture books to create a detailed world of stuffed animals and a memorable race.  Gentle lessons are inserted through the story, reminding readers that the journey is more important than the final destination and friendships are more valuable than finishing first.

Cons:  American children may not know what a “spanner” is when one is used to repair the broken wheel.

Summary:  What would it be like if the principal was…your mom?  Allie give an insider’s view, sharing her stories of staying after school with a small group of kids (the Afters) whose parents all work at school.  It’s fun to have behind-the-scenes access to school, but a drag to have to stay after every day.  Plus, Allie’s best friend Chloe hasn’t spoken to her since an incident in fourth grade where Chloe thought Allie ratted her out to her mom.  Allie’s got some other problems, too–her overworked mom isn’t as much fun as she was when she was a teacher, and Graham–another old friend and fellow After–is acting weird.  Author Robin Mellon draws on her own experiences as a principal’s kid to explain the ups and downs of that role.  272 pages; grades 3-6.

Pros:  Fans of Dork Diaries and other realistic school stories will enjoy Allie’s authentic voice as she shows readers what it’s like to have the insider track at school.  Short chapters keep the action moving quickly.

Cons:  Allie occasionally sounds a little wise beyond her years. 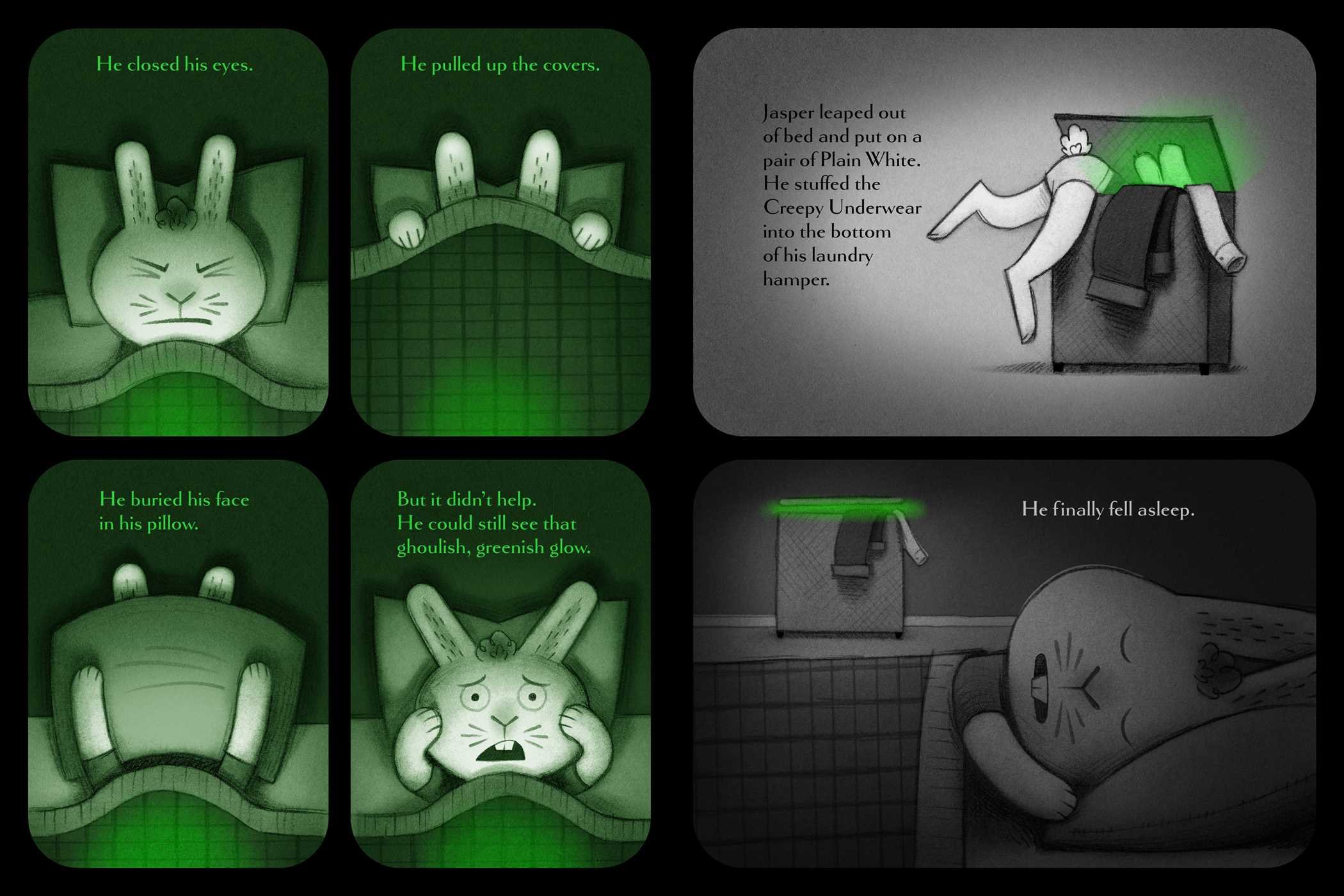 Summary:  Jasper Rabbit, the protagonist of Creepy Carrots! is back in a spine-tingling tale of underwear gone bad.  He convinces his mom that he’s old enough to handle a creepy pair of underwear, but when he wears them to bed, he discovers they glow in the dark.  He quickly changes to white, burying the creepy pair in the hamper.  The next morning…he’s wearing the creepy underwear!  He tries throwing them in the trash, mailing them to China, and cutting them into shreds, but they keep coming back.  Finally, Jasper takes them on a long bike ride (the creepy carrots make a guest appearance), and buries them deep in the earth.  Will they come back again?  Or has Jasper finally succeeded in ridding himself of this creepy pair of underwear?  48 pages; ages 4-8.

Pros:  Just in time for a Halloween story hours comes this perfect blend of spooky and funny from the Caldecott Honor winning team that brought you Creepy Carrots!  Any child who doesn’t want to read this book upon seeing the cover should probably be checked for a pulse.

Cons:  Well…creepy underwear is kind of a con. 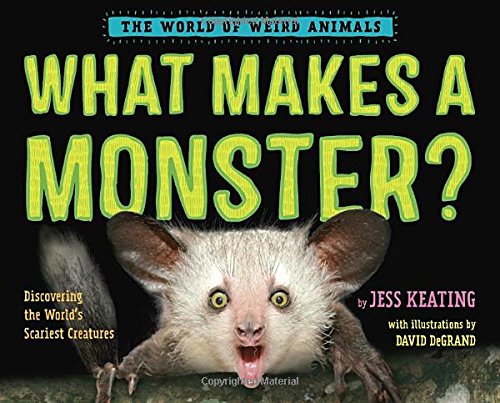 Summary:  From the team that brought you Pink Is for Blobfish comes this collection of animals that can seem “monstrous”.  Each two-page spread features a photo of the animal, a brief description of the animal and what makes dangerous or deadly, a sidebar with facts like diet and habitat, and another interesting fact or two.  Many of the animals have monster-sounding names like the assassin bug, the horror frog, and the tyrant leech king.  And some of them are downright creepy, like the cordyceps fungus that takes over insects’ brains, causing them to self-destruct.  The final page is the seemingly obligatory inclusion of humans with a catalog of how we are wreaking havoc on the planet.  Includes a page connecting animals to famous monsters (e.g., Dracula and the vampire bat), a page explaining how what we see as scary is really an animal’s way of protecting itself, and a glossary.  48 pages; grades 1-4.

Cons:  An introductory page would have been nice to give an overview of the book before diving into the first animal.

Summary:  Bixby Alexander Tam is known as Bat, not only because of his initials, but also because he loves animals, has a tendency to flap his hands like wings when he gets nervous, and is sensitive to sound, sometimes leading him to don his sister’s earmuffs at school.  When his veterinarian mother brings home an orphaned baby skunk, Bat is thrilled, and sets out to be the best baby skunk caretaker ever.  His teacher helps him send an email to a skunk expert, and Bat is excited to get an encouraging reply from him.  Although it’s never stated, it’s pretty clear Bat is somewhere on the autism spectrum, and he must find his own way to navigate the world, dealing with his divorced parents, occasionally annoying older sister, and a boy in his class who just might be a friend.  208 pages; grades 2-5.

Pros:  A thoughtful and humorous story told through the eyes of Bat, a sympathetic character with difficulties that many young readers will recognize.  I hope there will be more stories forthcoming about Bat and his family. 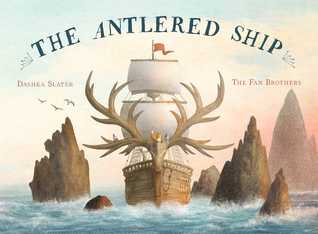 Summary:  Marco is a fox who wonders many things about the world.  He tries asking other foxes, but no one seems to think his questions are important, never mind having any actual answers.  When an antlered ship arrives at the harbor near his house, Marco goes down to see it, and meets the three deer who have come looking for a crew.  The young fox volunteers, along with a flock of pigeons, and the animals set sail for adventure.  They’re excited, but the voyage proves difficult, as they deal with storms, pirates, and pigeons who don’t like to work.  But slowly, friendships are formed, and after discovering one island, the whole crew decides to move on to further adventures.  48 pages; ages 4-8.

Pros:  Unquestionably a Caldecott contender, with illustrations that are both gorgeous and humorous (check out the pigeons playing checkers instead of working).  The story is a gentle celebration of both curiosity and friendship.

Cons:  Those pirates are too cute to really seem ferocious. 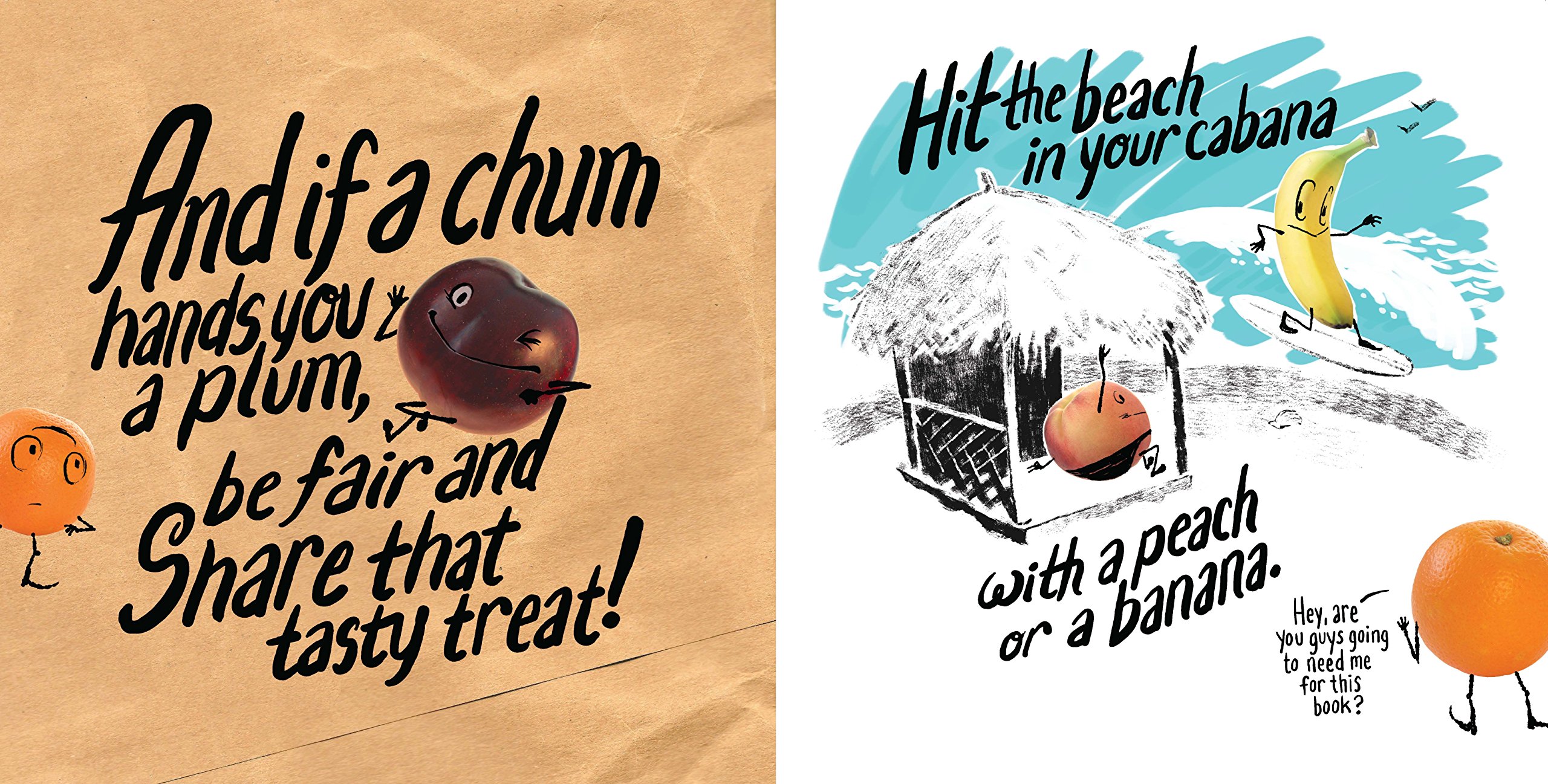 Summary:  A lonely orange stands by and watches as other fruits star in catchy rhymes: “Hit the beach in your cabana with a peach or a banana.”  He goes from trying to join in, to realizing there’s nothing that rhymes with orange, to deciding he doesn’t really want to be part of it after all as the rhymes grow increasingly crazy.  “I think cherries are ‘the berries’ and a lychee is just peachy/Thus Spake Zarathustra is a book by Friedrich Nietzsche.”  Finally, though, “the fruit are feeling rotten/’cause there’s someone they’ve forgotten.”  The orange perks up, and really gets excited when the apple calls him “smorange” and makes up a rhyme all his own.  The final two-page spread shows the orange happily leading the whole pack of fruit (and Nietzsche).  48 pages; grades K-3.

Pros:  The funniest book I’ve read this year (okay, maybe it’s tied with The Legend of Rock Paper Scissors).  It’s hard to do it justice, but the orange’s commentary as the fruit are frolicking all over the pages hit my funny bone in just the right way.  Kids will love the design of each page, with the text and illustrations conveying the increasing chaos of the fruits’ antics.

Cons:  I checked out the pronunciation of Nietzsche on YouTube, and it doesn’t actually rhyme with “peachy”.  More like “peach-a”.

Summary:  In an alternate New York City, three seventh graders rush to solve a century-old puzzle that they hope will save their home.  When the unique building they live in is bought by an uncaring billionaire, twins Theo and Tess and their friend Jaime decide to try to solve the Cipher.  Created by the Morningstarr twins in the nineteenth century, the Cipher has baffled people for years, including the twins’ grandfather, now suffering from dementia.  When the kids discover a letter sent to their grandfather that appears to be from one of the Morningstarrs, they think they have stumbled upon a new version of the Cipher that may lead to its solution and the treasure that awaits the solver.  Rushing from one adventure to the next, the reader learns about some of the steampunk-inspired inventions of the Morningstarrs that are part of daily life in this version of NYC.  Although the kids discover important clues, the case of the Cipher is still not cracked by the end, and a cliffhanger will leave readers anxiously awaiting book 2.  496 pages; grades 4-8.

Cons:  The kids seemed to solve the extremely difficult puzzles with remarkable ease…although at least some of that may be part of the mystery.

Summary:  In this wordless picture book, a crocodile wakes from a happy dream of living in the jungle, then gets ready for his day.  His morning routine is shown in detail, starting in his apartment where he dresses in natty business attire, then moving to his walk and train ride to get to work.  He window shops and get splashed by a passing motorist.  He buys a newspaper and some flowers, which he later delivers to a young lady.  Finally, he arrives at work, where he makes a quick clothing change and takes his place at his job…you may be surprised to find out what it is!  32 pages; ages 4-8.

Pros:  I’ve mentioned before my love of wordless picture books, and this one has so much to see.  There are many details on each page, including other animals mixed in with the humans.  The two-page spread of the crocodile on the subway deserves at least a good five minutes’ perusal.

Cons:  This book doesn’t seem to be getting much promotion.  I couldn’t find reviews for it anywhere.  Maybe because it’s an Italian import?

Summary:  During World War I, Great Britain was desperate to find a way to protect its ships from German torpedoes.  Desperate enough to consider training seagulls or sea lions to spot submarines, or to have swimmers try to smash the subs’ periscopes.  But then a Royal Navy officer had an idea to camouflage the ships.  The camouflage, however, wasn’t to make the ships blend in with their surroundings, but rather to use brilliant patterns to break up the shape of the boats and confuse the Germans looking at them through their periscopes.  The Navy hired teams of women to come in and “dazzle” many of its ships.  The U.S. copied the idea, and over 4,000 ships were painted before the end of the war in 1918.  Did this method really work?  The verdict is still out; more ships did avoid torpedoes, but there were other tactics used like convoys and depth charges that might have been more effective.  The dazzle ships do celebrate, in an eye-catching way, the power of creative thinking and problem solving.  Includes notes from the author and illustrator with more history and a description of how they created this book, as well as a timeline of WWI events, and some photos of Wilkinson, his team of painters, and one of their ships.  36 pages; grades 2-5.

Pros:  An fascinating bit of little-known military history, illustrated with amazing art nouveau paintings that celebrate patterns and the art of the time.  I would love to see this considered for a Caldecott.

Cons:  It was disappointing to learn that the dazzle ships might not have actually prevented any torpedo attacks.