Summary:  From the time she was a child, Mary Blair loved colors of all hues.  She used them at art school, and they led her to a job at Disney Studios, one of the first women to be hired by them.  Once there, though, a group of older men rejected her colorful drawings, preferring to stick with mostly black and white.  She did succeed in catching the attention of one man, Walt Disney himself, who invited her on a tour of South America to create art.  Upon her return, under the South American influence, her art grew even more eye-popping, and some of her ideas were finally accepted, including Cinderella’s pumpkin coach and Alice in Wonderland’s caterpillar.  But too many of her ideas were turned down, and Mary went off on her own, where she created children’s book illustrations and theater sets.  A few years later, Walt Disney approached her with a new plan, and Mary became the chief designer for his “It’s a Small World” ride.  At last, her colors could flow freely, and the world could finally see Mary’s world as she had always imagined it.  Includes an author’s note with biographical information.  48 pages; ages 4-8.

Pros:  A colorful biography of a little-known artist with a connection most kids will recognize and a “be yourself” message about creativity.

Cons:  Now we will all have “It’s a Small World” stuck in our heads for the rest of the day.

Summary:  Jack is a mischievous monkey in this three-chapter beginning reader.  In the first chapter, he steals a woman’s purse and puts on some lipstick.  The second chapter starts out being about Rex the dog, but when Rex’s lips suddenly turn red, Jack is revealed to be the culprit.  The final story takes place at the woman’s house (she’s known only as The Lady).  Jack shows his hands to convince her that he doesn’t have any lipstick; meanwhile, he’s writing his name on her wall with a lipstick held by his tail.  There seems to be the beginning of a friendship when The Lady offers Jack a cookie; Jack reciprocates with a kiss…but his version (involving Rex) is a little different from what she is expecting.  The final pages show how to draw Jack, Rex, and The Lady.  80 pages; ages 4-8.

Pros:  Behold, the first book of 2018, from an advance reader copy I picked up at AALS.  The pairing of Mac Barnett and Greg Pizzoli is kind of genius, and I predict beginning readers are going to love this series.  The first two entries are scheduled for February, with two more to come in May.

Cons:  It’s a lot of pages for a beginner.

Summary:  Gavin, Natalie, Trevor, Scott, and Randi are all looking forward to sixth grade with Mr. Mitchell, and are dismayed when they learn at the end of the summer that he has left, replaced with Mrs. Woods who is coming out of retirement to teach them.  Each kid is struggling with different issues, including an abusive brother (Trevor), an overly ambitious mom pushing her in gymnastics (Randi), a know-it-all attitude that’s resulted in no friends (Natalie), learning disabilities (Gavin), and immaturity and impulsivity (Scott).  They take turns telling the story of how each gradually comes to enjoy Mrs. Woods’ teaching style, only to see the best parts of sixth grade disappear to make way for standardized test preparation.  The test becomes high-stakes for each one of them for a different reason, and the stress about not doing well results in a plan to cheat.  When their perfect scores arouse suspicion, the truth comes out, but with it comes the truth about many of the other issues in the kids’ lives.  There’s a lot to resolve with both students and teachers, but the school year ends on a high note.  368 pages; grades 4-7.

Pros:  Fans of the author’s Mr. Terupt series will enjoy this new book told in a similar style, with five different narrators.  Many readers will find something to connect with in at least one of the main characters.

Summary:  When a blizzard hits town, most of the snowplow drivers go for the big, tough plows.  But Gus agrees to drive Walt, the smallest one in the fleet, and Walt is determined not to let him down.  They plug along through town, and Walt keeps himself going with rhymes such as, “My name is Walt. I plow and I salt. I clear the snow so the cars can go!”  Finally, they reach a high hill with the biggest drifts Gus has ever seen.  “I don’t think we’re up to this,” he says, but Walt has different ideas.  With a bit of slipping and sliding, they make it to the top, then back down again, with mega snowplow Big Buck following close behind.  At dawn, they head back to the parking lot, and even Big Buck has grudging words of admiration for Walt.  As for Gus, he takes off his blue scarf and ties it around Walt’s rearview mirror, cementing their friendship for snowstorms yet to come.  40 pages; ages 4-8.

Pros:  A cross between Mike Mulligan and His Steam Shovel and The Little Engine That Could, this is a charming story of persistence and optimism with pleasantly retro illustrations.  A perfect read-aloud for the coming winter months.

Cons:  For the purpose of story hours and kids chanting along with a repeated refrain, Walt should have made up one rhyme and stuck with it.  Instead, he kept changing it. 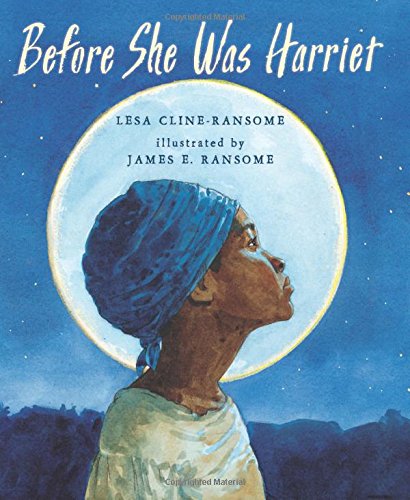 Summary:  Harriet Tubman’s story is told in reverse, beginning when she is “an old woman/tired and worn/her legs stiff/her back achy”.  Before that, she was a suffragist, and before that, a Union spy.  The narrative continues back in time, showing Harriet as Moses, conducting slaves to freedom on the Underground Railroad, and finally, all the way back to a child named Araminta, “who dreamed/of living long enough/to one day/be old/stiff and achy/tired and worn and wrinkled/and free”.  32 pages; grades 1-4.

Cons:  I was disappointed that there was no back matter giving more biographical information.

Summary:  Lucy is excited to learn how to code in a new after-school club.  Her best friend, Anjali, is part of the theater club, and Lucy doesn’t have any coding friends.  When she gets an anonymous note written in code, she enlists some of the other girls from the club to try to help her solve the mystery.  With the help of her older brother Alex, Lucy and her three new friends create a game that eventually reveals the identity of the note writer.  By the time the mystery is solved, the four have formed a friendship and are ready to move along to book #2.  144 pages; grades 3-6.

Pros:  Two books about girls coding in the same week!  This one manages to sneak a few coding lessons into a book about friendship that coders and non-coders (and soon-to-be coders) will all enjoy.  Written by the creator of the Girls Who Code movement (www.girlswhocode.com) that is starting coding clubs for girls all over North America.

Summary:  Allie has worked hard at CodeGirls summer camp, developing at app called Click’d that’s designed to help people make friends.  Her final presentation is so successful that she’s invited to enter the annual Games4Good competition, where  young programmers showcase their games designed to make the world a better place.  Allie’s plan is to keep Click’d under wraps until after the competition, but her friends’ enthusiasm is so flattering that she ends up releasing it early.  Before long, much to Allie’s delight, the game goes viral, but within a few days there’s a security flaw, and one of her friend’s private texts appears on other kids’ phones.  Allie knows she has to fix the problem before the competition, but the only person who can help her is Nathan, another super coder at her school, a fellow competitor at Games4Good, and her long-time nemesis.  It’s a roller-coaster week for Allie as she navigates the highs and lows of both the tech industry and seventh grade.  304 pages; grades 3-7.

Pros:  A fast-paced, funny story about two smart and talented coders whose skills don’t always extend to the social world of middle school.  Good messages about friendships are subtly woven into the light, breezy plot.

Cons:  Click’d didn’t really seem like it belonged in the Games4Good contest, going up against other games that addressed homelessness and the world’s water supply.