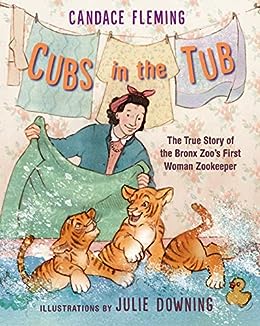 Summary:  Helen and Fred Martini wanted to have a baby, but this was not in the cards for them.  One day, Fred, a zookeeper at the Bronx Zoo, brought home a lion cub whose mother had abandoned it.  He told Helen to care for the cub the way she would a human baby, so she went to work feeding him, grooming him, and tucking him into a crib.  The lion, MacArthur, stayed with the Martinis for two months before being transferred to another zoo.  Next came three tiger cubs, named Raniganj, Dacca, and Rajpur.  When it was time for them to go back to the zoo, Helen went along.  Fred showed her a storeroom that she proceeded to turn into a zoo nursery.  When zoo officials found out, they offered her a job as “keeper of the nursery”.  Helen kept this position for the next 20 years, becoming the Bronx Zoo’s first woman zookeeper and pioneering new methods for caring for young animals.  Includes additional information about Helen Martini, a photo, and a bibliography.  48 pages; grades K-3.

Pros:  Lots of adorable animal illustrations will draw kids to this books, and they’ll learn about a woman who quietly broke down barriers.  The author’s note emphasizes how Helen, like many women of her time, worked within existing power structures to find a way to have a career at a time when women were encouraged to stay home.

Cons:  The connection between Helen’s wish for a human baby and the fulfillment of that wish through baby zoo animals felt a little uncomfortable, both for Helen and the animals.