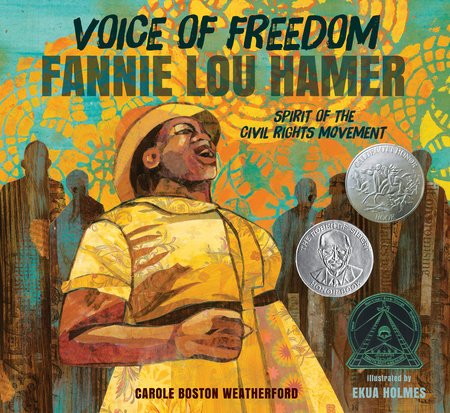 Summary:  Fannie Lou Hamer’s story is told in her own poetic voice, illustrated with collage renderings of events throughout her life.  Born in the Mississippi delta, the youngest of 20 children, Fannie Lou had to drop out of school after sixth grade to work in the cotton fields.  She married Perry Hamer and adopted two daughters after being tricked into having an operation to prevent her from being able to have children.  In 1962, she attended her first voter registration meeting, unaware that blacks even had the right to vote.  Within the year she was deeply involved in the Civil Rights Movement, losing her job and her home as a result.  Imprisoned and badly beaten, she refused to give up her work, eventually becoming a national spokesperson for the Student Nonviolent Coordinating Committee and addressing the 1964 Democratic National Convention about voter discrimination.  Fannie Lou also worked to improve conditions in Mississippi, organizing cotton pickers and starting a Head Start program.  She died in 1977.  An author’s note, timeline, and bibliography are included.  56 pages; grades 5-8.

Pros:  A powerful story about a poor, uneducated woman who was able to make a difference on a national level.  The poetic text perfectly captures Hamer’s voice, and is complemented by the large, colorful illustrations.

Cons:  There’s a lot of information here, and even older students may need some historical context to understand all of Hamer’s contributions.