Each year brings a larger group of graphic novels for a wider range of readers.  Here are some that I particularly enjoyed this year: 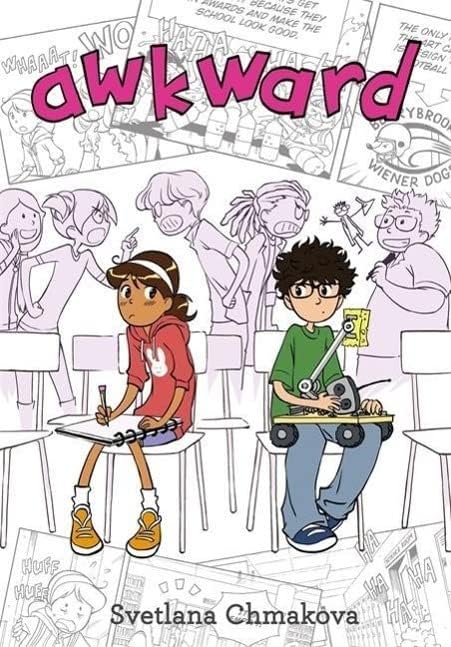 Peppi treats another kid badly on her first day of middle school…then spends a good portion of the rest of the book beating herself up about it and trying to make amends.  Perfectly captures middle school angst.

Sunny Side Up by Jennifer Holm, illustrated by Matthew Holm.  Published by Scholastic.  Book trailer: https://www.youtube.com/watch?v=vOC_Vjc2wRg

The month of August in a Florida retirement community?  Sunny struggles to adapt to her sudden visit to Grandpa’s.  Flashback scenes help the reader figure out the family difficulties that have precipitated the need to have Sunny out of the house for a month.  Based on the authors’ own childhood, Sunny Side Up is a story of family love and resilience.

Another middle school story…Astrid and her best friend Nicole pursue different interests, and the possibility of the end of their friendship, during the summer before sixth grade.  While Nicole follows her passion for dance, Astrid decides to try roller derby camp.  Amidst the bumps, bruises, and falls, she discovers something she loves and maybe, just maybe, can learn to be good at.

Part friendship story, part engineering manual, Lost in NYC recounts a comedy of errors school field trip on the New York City subway that results in a new friendship and a lesson in NYC’s subterranean maze.

Secret Coders by Gene Luen Yang, illustrated by Mike Holmes.  Published by First Second.  Hopper’s first day in her new school is anything but ordinary, as she and a new friend discover binary coding, some unusual owls, and an underground network run by a pretty creepy custodian.