Summary: A little girl and her father are reading a book together. She is invited to take a closer look, and travels inside, where she can look, listen, but especially touch. She climbs inside a wooly sock, then gets dripped on by a wet mitten. She walks along a mossy trail and tries on a scratchy tutu. A furry kitten and a shaggy llama are just some of her companions on the journey. Hot cocoa, crumbly cake, and a comfy chair draw her back out the other side of the book, where night is falling and it’s time for bed. 48 pages; ages 3-7.

Pros: Beautiful illustrations and oversized, decorated words make this book a visual feast. It’s a great introduction to textures and describing words that would work well with toddlers or as a writing lesson for older kids. 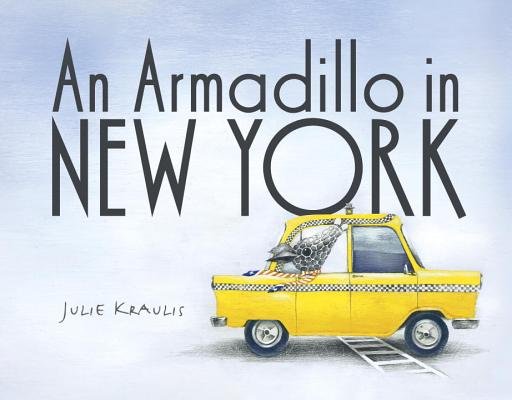 Summary: Arlo, an armadillo based in Brazil, knows that when he feels a twitch in his left claw, it’s time for him to start planning an adventure. His grandfather Augustin gave him a set of travel journals about all his favorite places, and the one about New York City guides Arlo on his journey. Making stops at the Brooklyn Bridge, Yankee Stadium, Central Park, and many other well-known landmarks in the Big Apple, Arlo marvels at all that he sees. He’s also puzzled by his grandfather’s many references to Lady Liberty. It isn’t until his last stop, a trip on the ferry to Liberty Island, that he finally figures out who Lady Liberty really is. Arlo looks forward to return visits to the Statue of Liberty and other places in New York City. The last page gives additional facts about the Statue of Liberty. 32 pages; grades K-3.

Pros: The beautiful, slightly dreamy illustrations and the adorable armadillo will make readers want to take a trip to NYC. This is a sequel to An Armadillo in Paris; we can hope that Arlo will be doing more traveling in the future.

Summary: Raffa Santana is a gifted apothecary, training under his stern father. He has an intuition about mixing potions and infusions that often prove to be effective at healing. On his first independent trip to the Forest of Wonders, accompanied only by his cousin Garith, he discovers a mysterious red vine. When he later uses it to treat an injured bat, he is amazed to find out that the vine gives the power of speech to animals. Garith takes part of the vine with him when he and his father move to the capital city. When Raffa learns of other more dangerous properties the vine has, he knows he must travel to Garith’s new home to warn him. He undertakes a perilous journey, befriending two somewhat mysterious girls along the way, and discovers the real, ominous reason Garith and his father have moved. The four kids have to make a daring escape, and the end of the book finds them on their own, surrounded by adults who want to put a stop to their rebellion. The first chapter of the next book in the series is included to whet readers’ appetites for more. 352 pages; grades 4-7.

Cons: Is it just me, or is it grating to refer to dawn as “daybirth”, or have the characters wish each other “Steady morning”? It seems a little pretentious when compared to the humor of a Rick Riordan or J. K. Rowling.

Summary: The eyes have it in this collection of animal photographs and facts about eyes and vision. Many pages feature a close-up of an eye with the caption “Who am I?” with the answer revealed on the following page. Animals are arranged by mammal, bird, reptile and amphibian, and insect. The last page explains how the human eye works, followed by a glossary and index.  32 pages; ages 4-8.

Pros: The beautiful photos and interesting facts make this an inviting book to browse. Readers will also enjoy the guessing game element.

Cons: I found the book a little disjointed; it took me about half the book to pick up on the arrangement by type of animal.

Summary: Mac and Mac are twin noodleheads, meaning their heads are hollow tubes…with predictable results. In each of the three stories in this book, they experience some kind of nightmare. In the first, they decide to sleep outside to avoid having to make their beds the next morning, but scary sounds drive them back indoors. In the next episode, they have to decide how to divide Mom’s homemade apple pie. A non-noodlehead friend comes along and suggests they take a nap. The one who has the best dream will win. Of course, the two of them wake up to an empty pie plate and a full friend. The final installments involves a lost pillow and a series of nightmares that results in the two boys sleeping under their beds…a solution that gets them out of making their beds the next morning. 48 pages; ages 4-8.

Cons: Not the most cerebral read I’ve experienced this year.

Summary: Did you know otters often take over dens left behind by beavers, muskrats, or woodchucks? That’s the first of many facts you’ll learn in this information-packed book that follows a year in the life of an otter mother and her two offspring. As the babies grow, they learn the playful moves that characterize otters, moves that are useful for hunting and self-defense. By the end of the year, the babies have reached their full size, but continue to enjoy sliding and playing in the spring mud. Includes an index and a page of additional information about otters. 32 pages; grades K-3.

Pros: The text has both large and small fonts, so the book can be read as a quick read-aloud, or used for more in-depth research. The illustrations capture the happy, playful otter spirit.

Cons: How could I possibly say anything bad about otters?

Summary: Waylon’s finding fourth grade tough, both at school and at home. In school, Arlo Brody, the kid everyone wants to be like, has decided that the boys should be divided into two teams. Waylon just wants to be friends with all the kids, but Arlo says the teams are at war. A new boy, Baxter, who might be a criminal, seems to want to hang out with Waylon. Meanwhile, Neon (Waylon’s 14-year-old sister formerly known as Charlotte) has taken to wearing all black and locking herself into her room. Waylon’s passion is science, but even his best ideas can’t help him figure out the people around him. When he learns the word isthmus in geography class, he decides that’s what he has to be—the bridge between friends and family members who seem to be living in two different countries. A happy almost-ending is in store for everyone—until the final end raises a big question that will surely need a sequel to resolve. 208 pages; grades 1-4.

Pros: Clementine’s classmate gets a story of his own, with the Sara Pennypacker-Marla Frazee team produces a book every bit as winning as their first series.

Cons: See pages 12 and 13 for some pretty egregious typos.

Summary:  A group of cooking monkeys demonstrate how place value works.  Starting with the concept of using 26 letters to make up words, they show how ten digits make up numbers.  Just as rearranging letters gives words different meanings, so does moving around the digits in large numbers.  The concept of place value to show ones, tens, hundreds, and on up is introduced and reinforced with several examples.  A brief history of the Hindu-Arabic number system and its basis in the number ten is given.  There are also explanations of the comma in large numbers and the decimal point, with a brief explanation of numbers to the right of the decimal.  32 pages; grades K-4.

Pros:  A fun introduction to an important mathematical concept.  The illustrations add a light touch.

Cons:  The information about decimals may be a bit too much for kids just learning about place value.

Summary: The subtitle says it all…this collection of vegetarian recipes are all healthy, colorful, and simple to make. Recipes are divided into sections: snacks, drinks, salads, meals, sweets, and parties. Introductory material includes definitions of cooking terms, measurements, and illustrated guides to kitchen tools and prep techniques. Every recipe is accompanied by labeled photos of each ingredient, as well as a full-page color picture of the final product. 112 pages; ages 6-12.

Pros: Erin Gleeson is a former New York Times food photographer, so the pictures are gorgeous. Recipes are simple and healthy, with plenty of tips to help young chefs find their way around the kitchen. Some of the recipes require a bit more of an adventurous palate than others…more power to you if you can get your 6-year-old to eat kale and black bean tacos.

Cons: According to Amazon reviewers, there are a lot of repeat recipes in this book from the original The Forest Feast cookbook.

Summary: Charlie’s had more to handle in the last year than any 12-year-old should have to deal with. Not only has his mother died of cancer, but his best friend Frank has disappeared. His dad is working all the time, leaving Charlie to try to help his younger sister Imogen. When Imogen starts acting strange and talking about visiting Mom, Charlie investigates and finds a trapdoor under Imogen’s bed. When he climbs down, he finds himself back in his own house…only Mom is alive in this house. He spends a wonderful evening with her and Imogen, feasting on Mom’s famous spaghetti. Returning to the house without Mom is almost impossibly difficult, though, and much to his dismay, Charlie discovers he has lost his memory of ever eating spaghetti with his family. On the next trip back, Charlie thinks he catches a glimpse of Frank walking with his deceased grandmother. Charlie is drawn to go back with Imogen, but what price will they pay for their visits? And is it too late for Frank to ever return? 304 pages; grades 4-7.

Pros: Wow, it can’t be easy to write a book about a deceased parent that includes a courageous cast of kid characters and a hopeful ending, but Jennifer Maschari has nailed it on her first try. There’s also a trace of Coraline-like creepiness that will draw kids in to the story. And a cute, heroic, slightly magical dog is the cherry on top.

Cons: This book tackles a bunch of difficult themes that kids may appreciate more with some adult guidance.