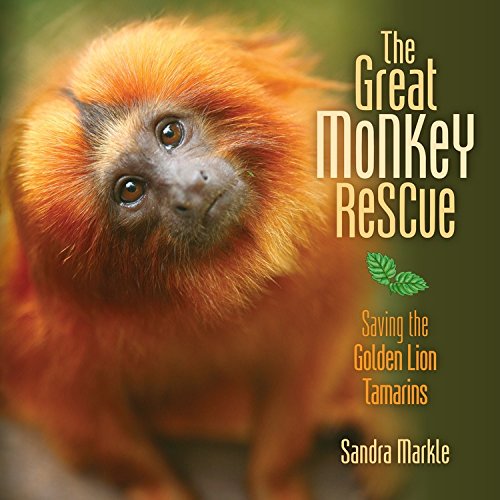 Summary: The story begins with a female golden lion tamarin trying to find a place to start a family. She’s rejected by groups of tamarins until she finally comes to the edge of the forest and realizes she has nowhere else to go. The narrative then moves to a look at the last few decades of human efforts to save this endangered Brazilian species. So much of the tamarins’ habitat has been destroyed that the animals were in danger of extinction. Tamarins in zoos weren’t breeding much, and if they did, the babies usually did not survive. Studying how the animals live in the wild led to greater success with zoo breeding programs, but challenges remained on how to introduce animals back into the rainforests. Slowly, over many years, scientists learned more about the golden lion tamarins and their environment, so that today the outlook for these animals looks positive. The female from the beginning discovers a tree bridge planted by scientists that leads her to a new home and family.   Includes a timeline, glossary, additional resources, and index. 48 pages; grades 4-7.

Pros: Packed with information, this book is written so engagingly that it’s hard to put down.  Plus, it has a happy ending.