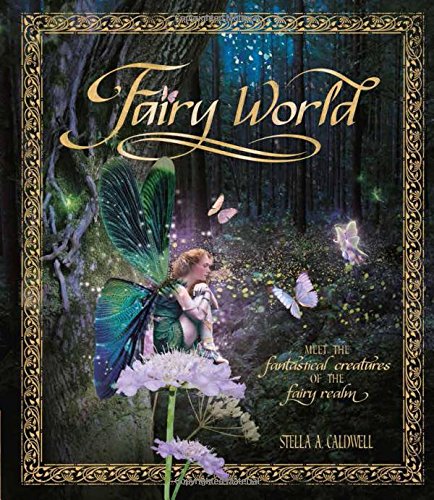 Summary:  Stella Caldwell presents herself as an expert on fairies who has traveled extensively to study these magical creatures.  Her definition of “fairy” extends to a variety of creatures including pixies, boggarts, elves, and many others.  She has included several “case studies”, relating stories in which she was called upon to investigate a human interaction with a fairy.  The oversized book is set up almost like a scrapbook, lavishly illustrated with labeled pictures of items associated with magical folk, such as wings and flowers.  There’s more than a hint of danger in associating with these creatures; many will help humans but can play tricks or worse if the people aren’t properly grateful.  The final two pages tell of fairies stealing children and replacing them with changelings who can eventually be trained to fit in to the human world.  80 pages; grades 4-7.

Pros:  Fantasy fans will want to spend lots of time poring over this book.  There is so much information, presented in a variety of ways, as well as gorgeous artwork.  In each chapter, there’s at least one wordless two-page spread illustration, suitable for framing.