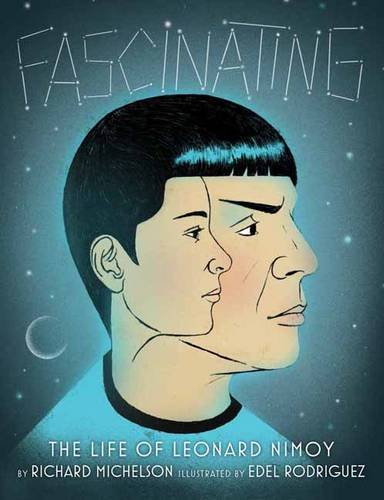 Summary:  Leonard Nimoy grew up in a four-room apartment in Boston’s West End, the son of Russian immigrants.  He got his first taste of acting at a Jewish settlement house.  By the time he was 17, he knew he wanted to be an actor.  Heading to Hollywood where he drove a taxi (he once gave John F. Kennedy a lift), Leonard built a moderately successful career in movies and television.  His life changed in 1965 when he got a call from Gene Rodenberry, asking him to play the alien Spock in his new series Star Trek.  Initially concerned that the pointy ears and weird haircut might ruin his career, Leonard made the fortuitous decision to take the part, and the rest is science-fiction history.  A final note (“The Rest Is History”) gives more information about Nimoy, including his lesser-known careers as a photographer, writer, and musician.  An author’s note tells of Michelson’s close friendship with Leonard Nimoy.  40 pages; grades 1-5.

Pros:  An engagingly-written biography of a man who, in fact, lived long and prospered, rising from a poor immigrant childhood to success in many arenas.  The stories about Nimoy flow together well to tell his story, and the illustrations do a good job of portraying Leonard/Spock.  Readers will enjoy learning the origin of Spock’s famous four-finger salute.

Cons:  The pallette for the illustrations is kind of drab.

One thought on “Fascinating: The Life of Leonard Nimoy by Richard Michelson, illustrated by Edel Rodriguez”