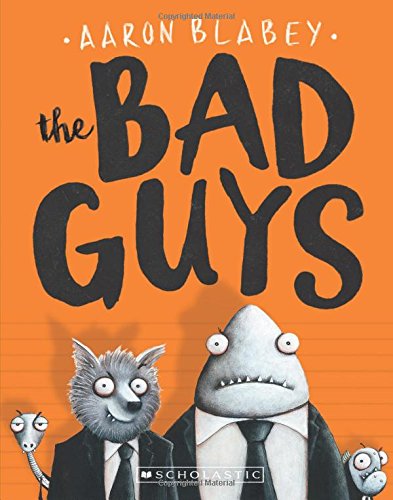 Summary:  Mr. Wolf is attemptng to turn over a new leaf, going from Bad Guy to Good Guy.  He tries to recruit a few other reputed Bad Guys to join him: Mr. Snake, Mr. Piranha, and Mr. Shark.  It’s pretty clear these three are okay with being bad, but they reluctantly agree to go along with Mr. Wolf’s plans.  After a crazy rescue of a cat from a tree, they decide to liberate 200 dogs from the local pound.  The plan, involving a flying snake and piranha, a shark in drag, and a love-struck gorilla, eventually succeeds…after a fashion.  In the final chapter, the Bad Guys admit it felt pretty good to be Good Guys, and offer a preview of the next book, in which they will rescue 10,000 chickens from a high-tech cage farm.  144 pages; grades 2-4.

Pros:  Reminiscent of the Bad Kitty chapter book format (almost a graphic novel, with just a few sentences per page, mostly dialogue), this is a guaranteed laugh-out-loud hit for readers of a certain age.  Yes, there’s a fart joke (or two), but even I, a good 40+ years past the target demographic, found the whole thing pretty darn funny.

One thought on “The Bad Guys by Aaron Blabey”