Summary:  Forty years ago, the Dutch city of Amsterdam had streets clogged with traffic, dangerous to anyone attempting to ride a bicycle.  How did it become the capital city of bicyclists, home to more bikes than cars?  Back in the 1970’s a young mother named Maartje Rutten watched beautiful old buildings being destroyed to make room for more highways, roads that were dangerous for her and friends who wanted to bicycle with their kids.  She began organizing protests, blocking the roads with demonstrations and even parties.  The fun turned serious when she met Vic Langenhoff, a reporter whose young daughter was killed by a car while biking to school.  The two joined forces, and their steady pressure on the government resulted in fewer cars, more bicycles, and safer streets.  Amsterdam has served as a model for making streets bike-friendly in other cities around the world like Tokyo and New York.  An author’s note tells more about Maartje Rutten and her campaign and gives a brief bibliography.  Great cyclists from around the world are shown on the endpapers.  40 pages; ages 4-10.

Pros:  Just in time for Earth Day, another inspiring environmental story from Allen Drummond, nicely illustrated with his cartoon-style watercolors.

Cons:  Kids may have to be led to this book, as the subject matter might not grab them right away.

Summary:  Matt loves Monster Zap cards and plays with them every day at recess.  But when the cards lead to problems on the playground, Principal Leon bans them.  Matt and his friends try to get around the ban by making their own cards, even getting encouragement from their cool teacher Miss Casey.  But when bad boys Mark and Steve make cards portraying Mr. Leon as a monster, it looks like there will be even more trouble.  It’s up to Matt to find a solution that will work for everyone in the school…and maybe even bring back the real Monster Zap cards.  88 pages; grades 1-4.

Pros:  A fun slice-of-life school story for kids ready to move up to chapter books.

Cons:  Clearly, Miss Casey is not adhering to the Common Core curriculum.

Summary:  Four kids from the same neighborhood share the story of an early summer day.  Valencia, whose voice is the only first person one, loves spending time observing the natural world, but sometimes feels cut off from other kids because she is deaf.  Virgil is the only quiet member of a loud, boisterous family and struggles at school, both academically and socially.  Kaori believes herself to have psychic powers and uses them to try to help Virgil.  Chet is a bully who picks on Virgil.  When he throws Virgil’s backpack in an old dry well, Virgil climbs down to rescue his guinea pig who is in the pack and can’t get back out.  Meanwhile, Valencia and Kaori have met for the first time, on a day Virgil had an appointment with Kaori.  When he doesn’t show up, they suspect something is wrong, and the wheels are set in motion for all four characters to come together.  Their lives intersect in the woods, where a dramatic rescue sets the stage for a happy ending.  320 pages; grades 3-7.

Pros:  Kelly does a masterful job of creating fully developed characters through the dialogue, actions, of memories of each child.  Even the bully becomes more understandable as the story unfolds.  Virgil’s plight is enough to keep the pages turning to the end.

Cons:  There’s (possibly) a bit of magic for Virgil in the well that might be confusing to younger readers.

Summary:  An old man wakes up in his house on an island.  He sees a bottle bobbing in the sea with a piece of paper inside.  Removing the paper, he begins to draw, creating a picture of a magical-looking flying ship.  He puts the picture back in the bottle and returns it to the ocean.  A boy walks to his home in the city, where he finds an envelope outside the door.  Inside is the old man’s picture.  He draws himself and his cat in the ship, then goes to bed.  Next, he and the cat are on the ship flying toward the island.  When they get there, he and the man embrace, then the boy gives him the picture with his additions.  The man waves as they fly away.  The man gazes at the picture of the boy as his candle slowly goes out.  In the morning, the boy awakens to a new day.  80 pages; grades 2+

Pros:  Wow!  What does it mean? This lengthy wordless picture book could be interpreted in many different ways.  Kids and adults alike will enjoy puzzling over the illustrations to create their own stories.

Cons:  It looks like a picture book, but this will be appreciated more by an older audience.

Summary:  Amina is a shy sixth grader.  She has a beautiful singing voice, but prefers to stay out of the spotlight.  Middle school is proving challenging, as her best friend Soojin is thinking of changing her Korean name to Susan and has started hanging out with Emily, a former enemy of both girls.  In addition to these universal problems, Amina struggles with her Pakistani immigrant parents who don’t always understand the American culture she and her brother live in.  When a conservative uncle comes for a visit from Pakistan and the Islamic Center is severely vandalized, Amina realizes she must overcome her shyness and learn to express who she truly is.  208 pages; grades 3-7.

Pros:  A moving story about a contemporary immigrant family and the struggles each member faces.  Readers will relate to Amina and her older brother Mustafa, while learning more about Pakistani culture and Islam.

Cons:  Kids may need some guidance in reading about the hate crime against the Islamic Center. 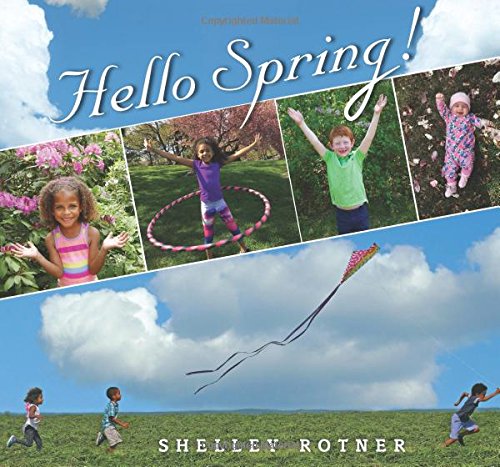 Summary:  Lots of colorful photographs provide an introduction to spring.  The focus is all on flora and fauna as a diverse group of kids discover flowers and other plants and hold baby farm animals.  Wild animals are also mentioned, particularly those who are waking up after a long winter’s sleep.  The text is brief, with some rhyming words and plenty of action verbs (“Frogs hop.  Earthworms creep.  Turtles crawl.”).  The final page announces the longest day of the year, which means the season changes again, to summer.  Includes a brief glossary.

Pros:  Young readers will enjoy familiar springtime sights and will learn to be on the lookout for signs of spring.  The photos are large, colorful, and appealing.

Cons:  It would have been nice to include signs of spring in the city, along with all the suburban/rural photos.

Summary:  When a baby rockhopper penguin is hungry, his mother goes in search of food while his father stays home to protect him.  The mother is part of a group of penguins that climbs cliffs and dives into the ocean, braving sea lion and orca predators, to hunt for fish and krill.  Meanwhile, when the baby penguin wanders off to explore, his father must protect him from a hungry skua (bird).  Finally, the family is reunited, and baby penguin gets his (apparently regurgitated) meal.  An author’s note gives more information on these Antarctic penguins.  32 pages; ages 4-8.

Pros:  Nic Bishop has another winning collection of nature photographs that will be popular with primary grades.  The story will draw them in, and the author’s note can be used to teach more about the penguins.

Cons:  The story was a bit more mundane than the photos.