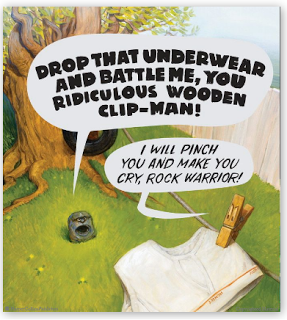 Summary:  Ever wonder where the game rock, paper, scissors came from?  Well, kids, it all started in the Kingdom of the Backyard where dwelt the mighty warrior Rock.  No one could defeat him, as he demonstrates in battles with Clothespin and Peach.  His victories bring him no joy, and he leaves the kingdom in search of a worthy foe.  A similar drama is played out with Paper in the Empire of Mom’s Home Office, and Scissors in the Kitchen Realm.  The three eventually meet up in the great cavern of the Two-Car Garage, where, you guessed it, Rock beats Scissors, Paper covers Rock, and Scissors cut Paper.  All three are so happy to have found a worthy opponent that they continue to re-enact their epic battles.  Which is why children everywhere honor these valiant warriors to this day by playing…that’s right: Rock, Paper, Scissors.  48 pages; ages 4-8.

Pros:  This gets my vote for the 2017 book I most want to read to first graders (so far!).  I can envision hordes of 5- , 6- , and 7-year-olds rolling on the floor with laughter over both the story and the pictures.  Have fun with this!

Cons:  Be prepared for the words “butt” and “underwear” if you read this out loud (see illustrations).  Which in part explains the rolling on the floor.