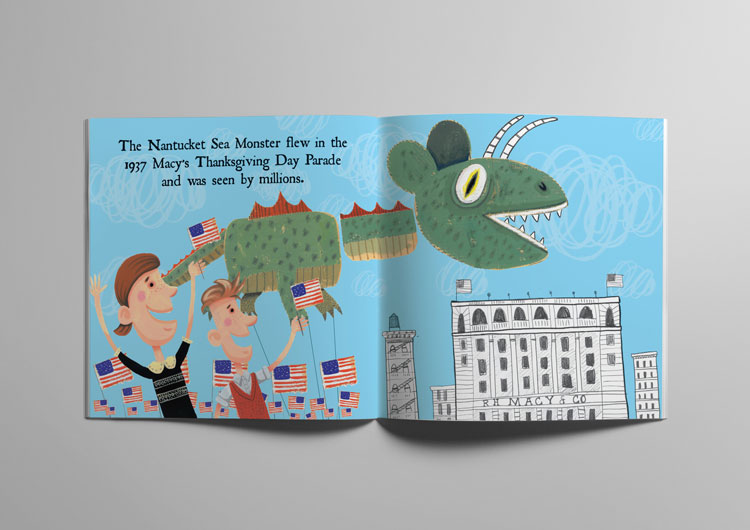 Summary:  August 4, 1937: Two men claim to have seen a sea monster off the coast of Nantucket.  The local newspaper reports the story, and before long, other witnesses come forward and describe a similar monster.  A few days later, five-foot long footprints are discovered on the beach.  Scientists at Harvard and the New England Aquarium study photos of the giant prints, while newspapers across the country pick up the story.  Two weeks later, word spreads that the monster has been caught.  When people rush to see it, they can’t believe their eyes.  The “monster” is a huge rubber balloon, designed by master puppeteer Tony Sarg for the Macy’s Thanksgiving parade.  It had all been a publicity stunt, with news reporters in on the hoax from the very beginning.  The float flew in the 1937 parade and was seen by millions more people; Nantucket got tons of free publicity.  Includes a timeline and two pages on the ethics of fake news.  32 pages; grades 2-5.

Pros:  A fun story that also has a timely message about the responsibilities of a free press; this would be a great catalyst for a discussion about today’s fake news.

Cons:  I was skeptical that the monster could be as goofy-looking as the illustrations showed.  As you can see from the photo, it actually was.  Hard to believe.