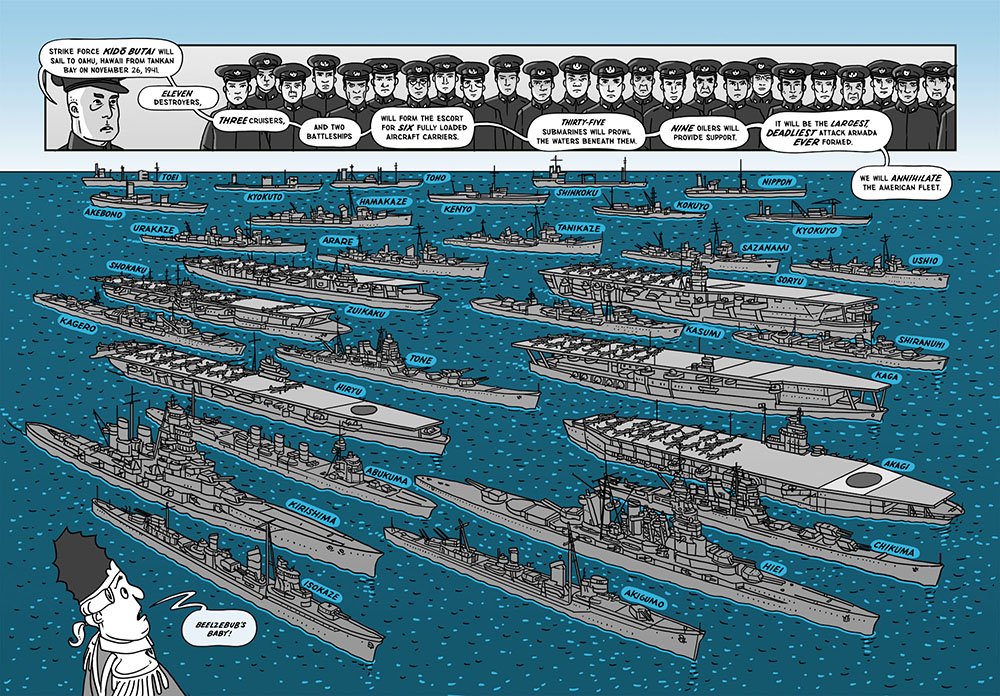 Summary:  In 1942, at a time when the Japanese empire seemed invulnerable, the U.S. government came up with a plan to bomb Tokyo.  Famed aviator James “Jimmy” Doolittle was chosen to lead the raid.  The men who were chosen to join him prepared without knowing anything about the top-secret mission they would be going on.  On April 18, 1942, sixteen bombers, each with a five-man crew, flew off an aircraft carrier, dropped bombs on their targets, then attempted to fly to China.  Fifteen made it, but crashed short of their destinations; the sixteenth landed in Russia.  Most of the men survived, although some were taken prisoner by the Japanese, and three of them were executed.  Although the mission didn’t do much damage, it was an important morale-booster for the United States that led to more military successes in the Pacific.  128 pages; grades 4-8.

Pros:  It’s difficult for me to find superlatives to express how much I love Nathan Hale’s Hazardous Tales.  For those who dismiss graphic works as “trash”, I would invite them to peruse this book and see how the graphics enhance the information.  Pages 20-24 show an aerial view of Pearl Harbor before and after Japan’s attack, demonstrating how devastating that was to America in a way words alone couldn’t do.  I love all the books; this particular one tells an exciting adventure story placed in the context of the early days of World War II.  There is plenty of humor without any disrespect to the heroic men whose stories are told.

Cons:  There were a lot of characters and planes (80 men and 16 bombers) to keep track of.

One thought on “Raid of No Return: A World War II Tale of the Doolittle Raid by Nathan Hale”