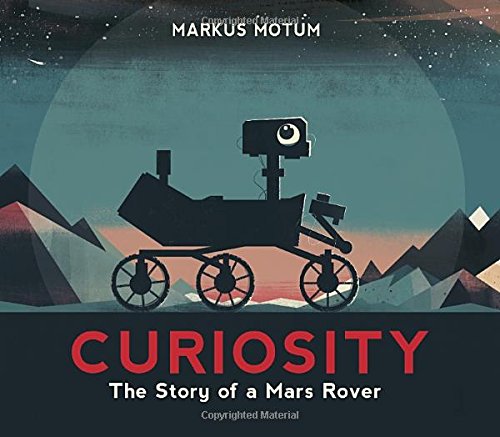 Summary:  In a first-person narration, the Mars rover Curiosity tells her story, beginning before she was built, when scientists at NASA started designing probes to learn more about Mars.  Curiosity (she was named by a sixth grader from Kansas) was to be larger and more advanced than any of the previous probes.  Labeled illustrations show the processes of designing and building her in Los Angeles, then flying her to Florida, where she was launched on November 26, 2011.  After 253 days of space travel and a somewhat precarious landing, Curiosity began the work of exploring Mars that she continues today.  Includes additional information about Mars rovers, a timeline, and a glossary.  56 pages; grades 2-6.

Pros:  The personification of the rover makes it accessible for elementary school kids; the text, illustrations, and labeled diagrams provide a lot of information.

Cons:  Two design issues: the book is so large it feels a bit unwieldy, and some of the black-on-blue or blue-on-black type/background combinations are difficult to read.