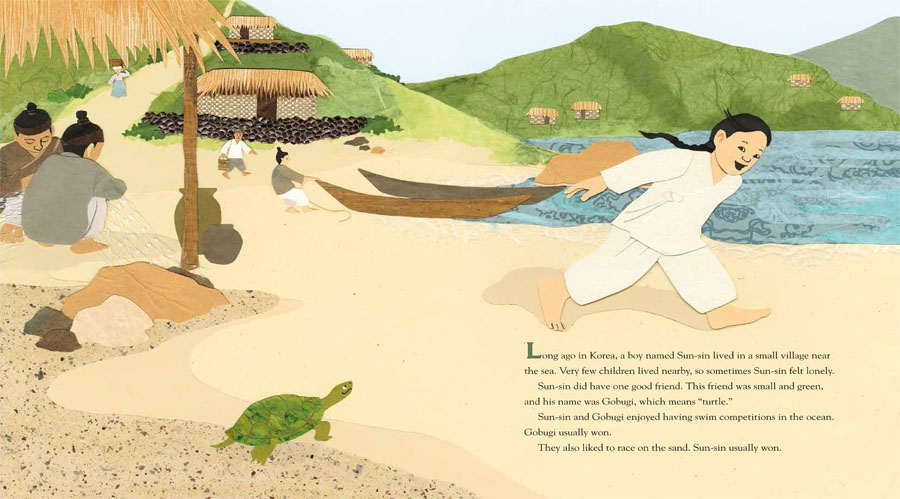 Summary:  Sun-sin lived in a small village in Korea; there weren’t any other children close by, so his closest friend was a turtle named Gobugi.  When Sun-sin heard about a contest sponsored by the king to design a battleship, the boy looked to his turtle for inspiration. He convinced his parents to travel to the royal palace, where Sun-sin was ridiculed for trying to compete with the adults.  But when Gobugi protected himself against an attack by the palace cat, the king saw the value of the turtle’s shell, and, like Sun-sin, was able to envision transforming the idea into a ship’s design. Years later, Sun-sin became a navy admiral and defeated 130 ships with just thirteen of his Turtle Ships.  An afterword tells the history of the Turtle Ship and Admiral Yi Sun-sin’s contributions to its design. Includes an author’s note, an illustrator’s note, and a photo of a Turtle Ship in a museum. 32 pages; grades 1-4.

Pros:  An interesting blend of Korean folklore and history, meticulously researched.  The collage illustrations are rich and detailed, and the lessons of persevering and staying true to your vision make this a good choice to share with kids.

Cons: It seemed like a pretty big leap for the king to come up with a ship design after watching the cat attack the turtle.