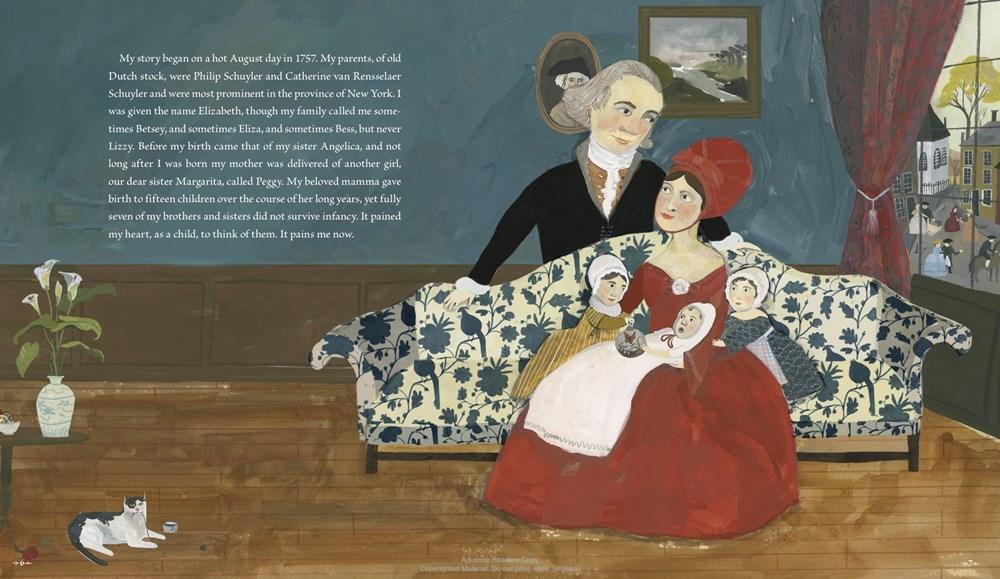 Summary:  Writing a letter to her soon-to-be-born grandchild, Eliza Hamilton tells the story of her life, starting as an adventurous girl who liked to run and play on her family’s farm in upstate New York.  She writes of her regret that her family owned slaves, and how they eventually freed them. Then she moves on to meeting and falling in love with Alexander Hamilton, and how she helped introduce him to some of her family’s socially prominent acquaintances.  After his death, she worked for many years to preserve his legacy, raise money for the Washington Monument and to continue and expand upon the charitable work the two of them had started. Her proudest achievement seems to have been founding New York’s first orphanage in 1806, an institution that continues to this day.  Back matter includes extensive notes and additional resources, as well as an afterword by Phillipa Soo, the original Eliza from Hamilton: An American Musical. 48 pages; grades 3-6.

Pros:  An excellent introduction to a lesser-known founding mother, with her accomplishments presented in their own right, not only in connection with her famous husband.  The folk art style illustrations add a lot to the text; older fans of the musical will enjoy this book as well as the youngsters.

Cons:  I’ve seen this book recommended for kids as young as 4 years old.  In my opinion, it wouldn’t be appreciated much by anyone without some background knowledge of early American history.

One thought on “Eliza: The Story of Elizabeth Schuyler Hamilton by Margaret McNamara, illustrated by Esme Shapiro.  ”