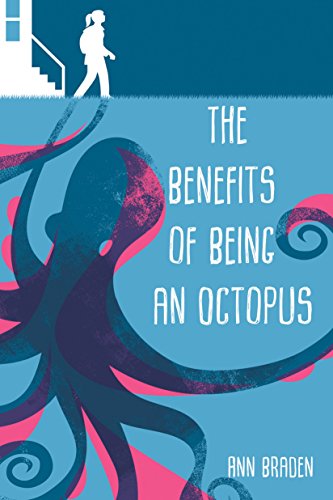 Summary:  Zoey wishes she could be her favorite animal, an octopus.  It would be nice to have eight arms when she’s trying to take care of her three younger siblings while her mother works and tries to keep her boyfriend, Lenny, happy so he’ll let them stay in his trailer.  It would be helpful to be able to have an octopus’s camouflage abilities so her wealthier classmates wouldn’t stare at her ill-fitting clothing.  And it wouldn’t be bad on occasion to be able to shoot a cloud of black ink at the kids who make fun of her or at the social studies teacher who is asking too many questions about Zoey’s home life.  But Zoey is a seventh grade girl, not an octopus, and when her teacher insists that she join the debate club, she starts to learn that discrediting an opponent is a technique, not only for winning a debate, but also for stealing another person’s confidence.  When Zoey sees Lenny doing that to her mom, she starts to think she needs  to intervene.  When her friend Fuchsia’s mom puts the two of them in a dangerous situation with her new boyfriend, Zoey realizes she has to leave her camouflage behind and speak up for herself and for the people she loves.  256 pages; grades 5-8.

Pros:  A compelling story of a family living in poverty, forced to make impossible choices just to get through the day.  Zoey sees the kids around her worrying about homework, having crushes, and enjoying their friends, but none of that normal middle school stuff can be for her because she is so weighed down by her family situation.  The ending is hopeful, but realistic–there is still a long difficult road ahead for Zoey and her mom.

Cons:  The gun debate subplot didn’t always ring true for me.  Zoey’s friend Silas loves to hunt, which seemed to be presented as the reason guns are okay, but he and his dad were hunting bobcats for sport, which didn’t really convince me that hunting is a good thing.