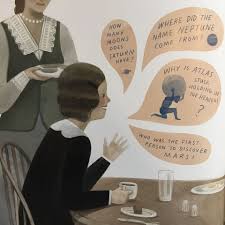 Summary:  Growing up in Oxford, Venetia Burney loved learning.  Her grandfather, the former head librarian at Oxford University, encouraged her curiosity.  When Grandfather shared a news item with 11-year-old Venetia about the discovery of a new planet beyond Neptune, she thought of how frozen, dark, and lifeless it must be.  It reminded her of the underworld in Greek mythology, and so she suggested naming it Pluto. Her grandfather sent a letter with her suggestion in it to a friend at the Royal Astronomical Society; he liked it, and eventually the name was voted on by astronomers.  Fast forward more than 70 years later: on the day before her 89th birthday, Venetia, still active and curious, gets an invitation to the Observatory Science Centre, where she finally gets a chance to see the planet she named. Includes an author’s note with additional information about Venetia and Pluto–including the change in its designation from plant to dwarf planet–and a bibliography. 40 pages; grades 1-4.

Pros:  A fun story for kids learning about space; they will be inspired to hear how a planet was named by a kid, albeit one with a wealthy, connected grandfather.

Cons:  I think we all still feel a little sad about the fate of former planet Pluto.