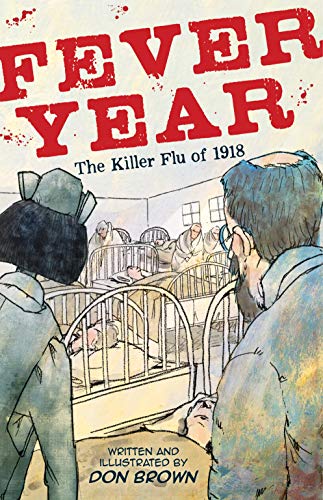 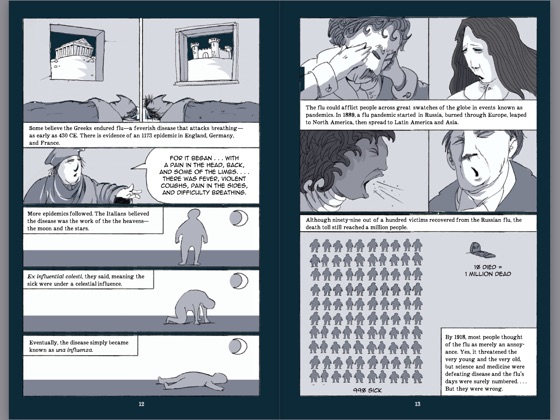 Summary:  Using a graphic novel format, Don Brown tells the story of the flu epidemic of 1918 and how it spread across the United States and around the globe.  The tale is told in three acts: January-July 1918 when the epidemic began; August-December 1918 when it raged full force; and 1919 when it came back to life, sickening, among others, President Woodrow Wilson at an important peace conference in Paris.  The text is brief, but covers many different aspects of the epidemic, including the spread and death toll, the importance and shortage of nurses, how different cities reacted when the flu hit them, and scientists’ attempts to figure out what was causing the disease.  The book concludes with recent scientists’ experiments that lead to the revival of the virus which had been preserved in the lung tissues of one of its victims, and questions as to the ethics of such work. Includes a five-page bibliography. 96 pages; grades 5-8.

Pros:  Don Brown packs a lot of information into fewer than 100 pages, in a format that will appeal to many readers.  Fans of Nathan Hale’s Hazardous Tales may enjoy this, as well as other graphic history books by Brown.

Cons:  All the reviews I saw recommended this for grades 7 and up, but I feel like there’s no reason not to suggest it to fifth and sixth grade history buffs.  True, it’s a story of disease, pestilence, and death, but nothing that I would consider inappropriate for kids 10 and up.