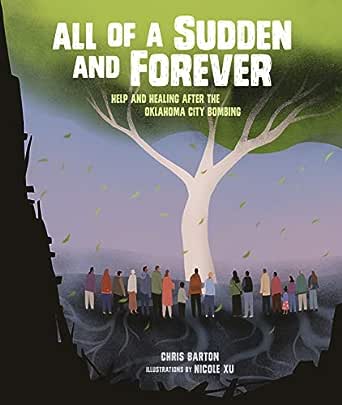 Summary:  “Sometimes bad things happen, and you have to tell everyone.  Sometimes terrible things happen and everybody knows.  One April morning in 1995, one of those terrible things happened in Oklahoma City.”  How do you tell the story of the Oklahoma City bombing to a picture book audience?  Answer: in a straightforward manner, with an emphasis on different losses and emotions different people experienced (“Some lost friends, neighbors….Some who survived had bodies broken in ways large and small….Some who rushed into help saw horrible things they would never forget”).  But also with an emphasis on healing, helping (and getting help), and moving on.  At the center of this part of the story is the Survivor Tree, an elm that survived the bombing and flourished in the years afterward, providing seedlings that have been planted far and wide.  Those seedlings have grown into trees and produced seedlings of their own, making the spread of trees an apt metaphor for the spread of help and comfort that has come from the survivors of this tragedy.  Includes author’s and illustrator’s notes; a list of people interviewed for the book, along with their connections to the bombing; and a list of recommended resources.  40 pages; grades 2-6.

Pros:  The Oklahoma City bombing doesn’t seem that long ago…until I look at my 25-year-old daughter who was born seven weeks afterward.  This book does an admirable job of introducing kids to the event, which they may never have heard of.  The illustrations are appropriately subdued; the faceless people in the pictures and the emphasis on grief and healing also make this a story to be read in conjunction with other difficult situations.

Cons:  Readers looking for a lot of information on the actual bombing will need to pursue some of the resources at the end.