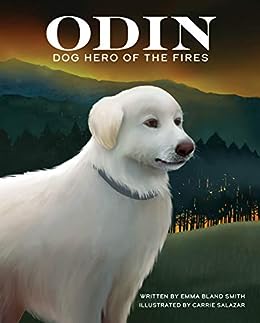 Summary:  Based on a true story, this tale is narrated by Odin, a Great Pyrenees dog charged with looking after the goats on a small California ranch.  When wildfires threaten the ranch, owner Roland and his daughter escape in their truck.  Odin’s sister goes with them, but Odin refuses to leave the goats.  He watches the house and barn burn, desperately seeking a safe refuge.  He finally notices some boulders, and leads the goats there, where they are eventually joined by a few fawns.  When Roland returns a few days later, he is stunned to see Odin and the goats, alive and well except for some burned whiskers and scorched paws.  Includes an author’s note about the actual event in October, 2017, with several photos of the dogs, goats, humans, and house before and after the fire.  36 pages; grades K-5.

Pros:  A story narrated by a dog featuring a based-on-a-true-story survival of a wildfire?  That’s almost too easy to book talk!  Readers of all ages will fall in love with Odin, and admire his devotion to duty in the face of danger.  They will enjoy poring over the author’s note and photos to learn more about the real people and animals.

Cons:  You might want to throw in some advice to kids about following directions in a fire, as not doing so doesn’t usually result in Odin’s happy outcome.