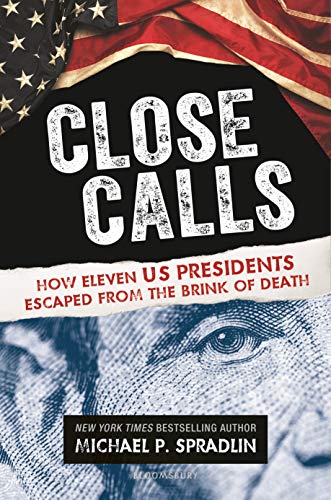 Summary:  These stories relate how eleven United States presidents narrowly escaped death, either before their administration or during it.  Quite a few are war stories, including George Washington in the American Revolution, and John F. Kennedy, Dwight D. Eisenhower, George H. W. Bush, and Gerald Ford in World War II.  A few were assassination attempts on sitting presidents: Andrew Jackson, Theodore Roosevelt, Harry Truman, and Ronald Reagan.  The story of Abraham Lincoln is how rumors of assassination were thwarted while Lincoln traveled to Washington, D.C. after he was elected president.  Each story includes at least one sidebar with information on a topic related to the main narrative.  Includes a list of sources and an index.  128 pages; grades 4-8.

Pros:  These exciting survival stories with some name recognition of at least the most famous presidents will surely entice some reluctant readers to sample some nonfiction.  Each chapter is relatively short with plenty of action.

Cons:  Not a single photo, and some of the stories (Kennedy, Carter, Reagan) have no dates.