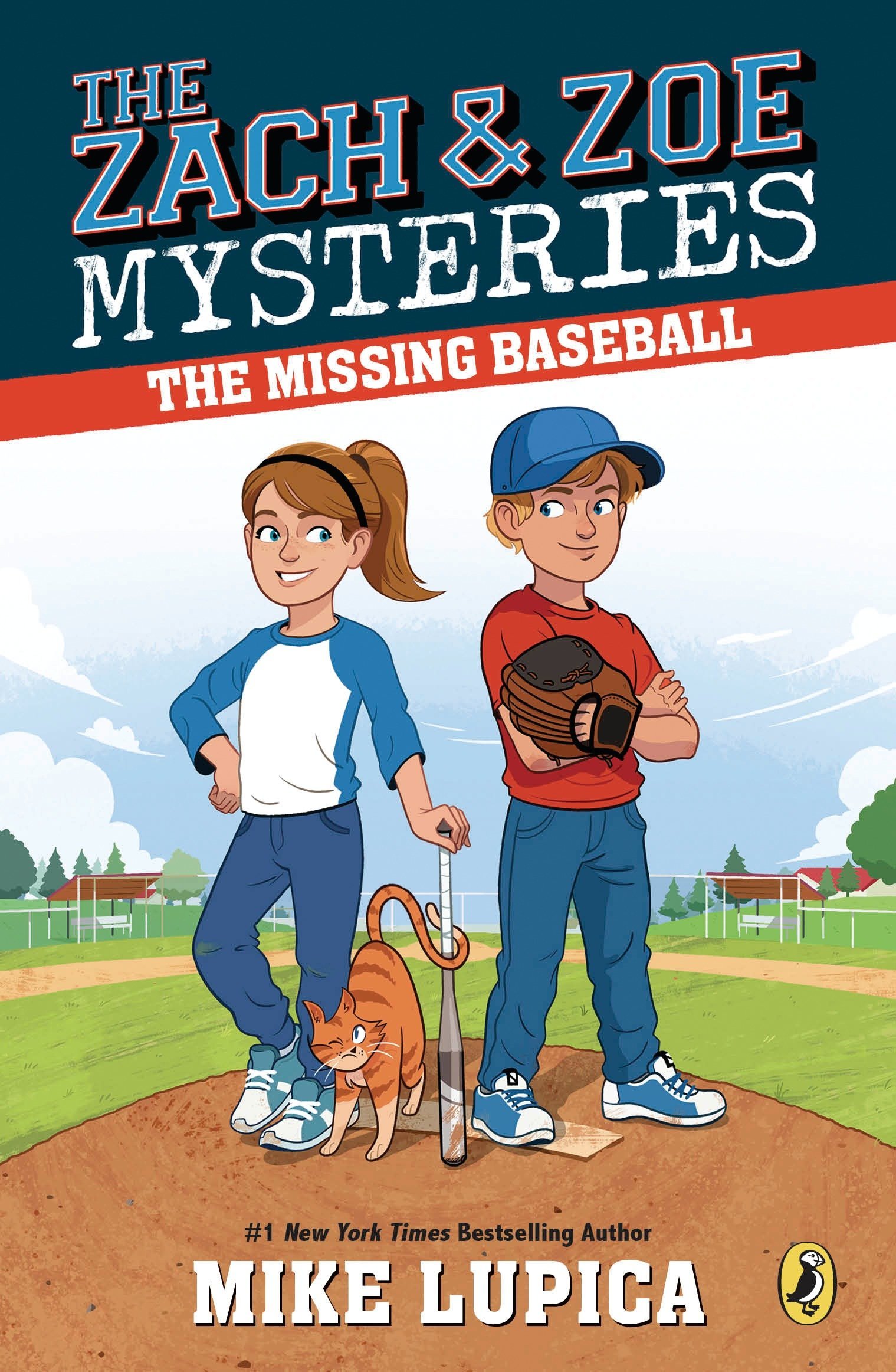 Summary:  Zach and Zoe are eight-year-old twins who love sports and solving mysteries.  When Zach brings his prized autographed baseball to school for sharing, he is dismayed when it disappears during lunchtime.  Zoe is on the case, scouting the area for clues and trying to piece together what happened when the kids were out of the classroom.  Meanwhile, it’s Spirit Week, and the entire third grade is competing for points to see if the Blue team or the White team will get the highest score.  It all comes down to a final baseball game, with Zach and Zoe each captaining their teams, for the resolution of both the Spirit Week competition and the missing baseball mystery.  80 pages; grades 1-3.

Pros:  In his first foray into books for younger kids, Mike Lupica does a nice job of creating a mystery that has plenty of sports action.  A good series for fans of David A, Kelly’s Baseball Mysteries and MVP series.

Cons:  I found Zoe and Zach’s parents  pretty annoying; it seemed like every other page featured one of them offering advice or one of the kids recalling some pearl of wisdom from Mom or Dad.

Summary:  Ty, Kevin, Mackenzie, Izzy, and JJ all have different reasons to want to audition for the Junior Ninja Champion show.  When they hear that local tryouts are being held nearby, they come together at Ty’s parents’ gym for kids to practice. Tara, a contestant from the National Ninja Show comes on board as their coach.  Each kid struggles with his or her own challenges, both on the course and off of it.  The story takes the team through two rounds of competition; they all make it through the first round, but only three are chosen to go on to the next one, which will be covered in book 2, coming out in January.  Includes an interview with American Ninja Warrior competitor Allyssa Beird.  176 pages; grades 3-5.

Pros:  A pretty quick read for sports and reality TV show fans that not only delves into the sports action but covers the kids’ emotional ups and downs as well.

Cons:  I was expecting more action and a faster pace from a book about kids competing to be ninjas.

Summary:  Katy Gordon is the star pitcher of her 1957 neighborhood baseball team.  One afternoon, wearing a jersey and cap and being called “Gordon” by the boys, she’s invited by a Little League scout to a tryout.  She makes the team, but when one of the other boys tells the coach that she’s a girl, she’s promptly kicked off.  Supported by her chemistry professor mother, she writes to Little League headquarters, but receives a disappointing response that includes the sentence, “Since the beginning of baseball as an organized sport, it has always been the sole province of male athletes.”  When Katy is assigned a research project at school, she decides to research women in baseball and is shocked to learn how many women have played since the beginning of the game.  Her project gets her some local attention, a story in the paper, and the chance to strike out Willie Mays, but even that isn’t enough to get her back into Little League.  In the end, she’s back to the neighborhood team; the final scene shows her reaching out to a younger girl who wants to play as well.  Includes information about the women Katy researches; an author’s note; a glossary; and additional resources.  320 pages; grades 4-7.

Pros:  Katy is a spunky narrator who will have boys and girls rooting for her in her campaign against the unfair Little League rules.  There are plenty of other interesting historical details, from Katy’s mother’s fight against McCarthyism at her university job to Katy receiving one of the new Frisbees for her birthday.

Cons:  On page 245, Katy’s friend Jules dismisses the Nancy Drew mysteries in this way: “They’re all about the same. Nancy has adventures, her chums get into trouble, Ned rescues them all (emphasis mine), and the mystery gets solved along the way.”  Having read more than 40 Nancy Drew books in my childhood, I feel safe in saying Nancy rescued Ned at least as often as the other way around.

Summary:  Fourth grader Zayd dreams of making the gold team in basketball, but he feels like he’s got a long way to go.  For one thing, he’s the shortest kid in his class and weighs less than 60 pounds.  For another, his mother is thrilled he’s been asked to join advanced orchestra and is certain his future lies with playing the violin.  When Zayd discovers his friends are coming to school early for extra basketball practice, he makes up a story to skip early-morning orchestra and plays with them instead.  His mom catches him eventually, and Zayd is grounded for two weeks…with basketball tryouts just nine days away.  Zayd is sure he’s doomed to play another season on the D team until his uncle gives him some useful advice about how to follow his dream.  144 pages; grades 2-5.

Pros:  An exciting, true-to-life sports story with interesting glimpses into Zayd’s Pakistani-American family and their culture.  Matt Christopher fans not quite ready for Mike Lupica will enjoy getting to know Zayd and can look forward to at least two more books in this series.

Cons:  Readers may wish for a little more actual sports action.  It looks like this may be coming in book 2.

Summary:  A group of enthusiastic children starts a soccer game on a grassy field in St. Lucia, shooing away a group of cows and building their own goal posts.  Passersby lean on the fence around the field, watching the action.  Even a rainstorm doesn’t stop the game, as the players take off their shoes and socks to slip, slide, and belly flop in the mud.  Finally, the mamas call everyone in for dinner; the children go home, but continue to dream about futbol as they sleep.  Includes an author’s note about his childhood playing soccer in St. Lucia and a list of Creole words and phrases used in the story.  32 pages; ages 4-8.

Pros:  Soccer fans will love the action in both the illustrations and the clipped text, interspersed with Creole words.  Even those not familiar with the game will enjoy the sense of play radiating from each scene.

Cons:  The text could have flowed a bit more smoothly.

Summary:  In these sequel to House Arrest, Levi, the sickly baby from the first book, is now in 7th grade.  Timothy, his older brother and the protagonist of book one, is applying to medical school.  Levi’s health has improved, but he still has some limitations, and his mother and brother tend to be overprotective.  His divorced dad is more laid-back and encourages Levi to try a sport. When Levi has a few sessions at the boxing gym, he proves to be a natural.  He ends up lying to both parents in order to continue pursuing the sport. In addition, his tendencies to be the class clown are pushing away his best friend, Tam, who is spending a lot of time with a new girl.  A medical crisis forces Levi to be honest with his friends and family, and to look at what is most important to him and what he can do to move in a new direction. 288 pages; grades 4-8.

Pros:  Fans of K. A. Holt’s other books, as well as Kwame Alexander’s Booked, The Crossover, and Rebound will enjoy this fast-paced sports-themed novel in verse.

Cons:  It took me a little while to warm up to Levi and get engaged in his story.

Summary:  As a child, Dave McGillivray aspired to be an athlete, but he was too small for most sports.  On his 12th birthday, he decided to try a new sport, running, and ended up running 12 miles.  Encouraged by his grandfather, he ran 13 miles on his 13th birthday, and continued that pattern for four more years.  At age 17, he announced he was ready for the Boston Marathon, but his lack of training caught up with him, and he collapsed at mile 18.  His grandfather encouraged him again, advising him that big dreams require hard work, and Dave promised him he’d cross the finish line the following year.  Sadly, his grandfather died before that marathon, and Dave almost gave up before the end of the race.  Taking a break at mile 21, he realized he was resting next to his grandfather’s cemetery.  This inspired him to finish the race, and he has continued to run it every year since.  Now he runs it two ways, as the director of the race and as the final runner, traversing the course at night after everyone else has finished.  Includes a challenge to run 26 miles, read 26 books, and do 26 acts of kindness in 26 weeks.  32 pages; grades 1-5.

Pros:  Just in time for marathon day, this inspiring story encourages kids to work hard and challenge themselves in a variety of ways.