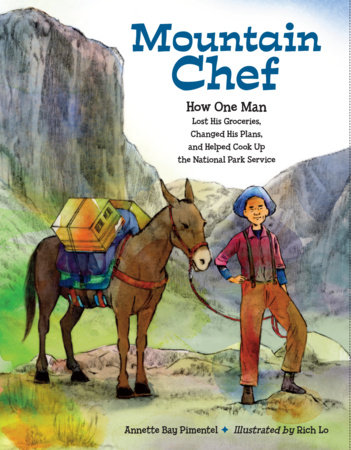 Summary:  In 1915, there were eleven national parks, but no service to administer them.  Assistant Secretary of the Interior Stephen Mather knew the country needed one, but couldn’t get through the Washington red tape to set it up.  To convince lawmakers, he organized a two-week camping trip through the mountains of California, and hired Tie Sing, a Chinese American trail cook reputed to be the best.  Tie Sing had his hands full, transporting and preparing such delicacies as frogs’ legs and Lyonnaise potatoes, and serving them on a table set with a tablecloth and fine china.  Along the way, he lost a couple of mules packed with supplies and food, and often had to improvise.  He succeeded in keeping the campers well-fed and happy, though, and the National Parks Service will celebrate its 100th birthday on August 25. Back matter includes more information about Tie Sing, the expedition, and several members of the party.  40 pages; grades 1-5.

Pros:  A fascinating story about a little-known man; Pimentel and Lo have succeeded admirably in bringing to life someone about whom very little is known.  There’s a lot of text, but the story is so engaging that this would make an excellent read-aloud.  As someone who has camped all over the U.S. and Canada, I appreciated Stephen Mather’s philosophy: “Give a man a poor breakfast after he has had a bad night’s sleep and he will not care how fine your scenery is.”

Cons:  It’s my opinion that any activity that involves English plum pudding with brandy sauce, peaches and cream, and a heavy linen tablecloth cannot really be described as “camping”.

One thought on “Mountain Chef: How One Man Lost His Groceries, Changed His Plans, and Helped Cook Up the National Park Service by Annette Bay Pimentel, illustrated by Rich Lo”