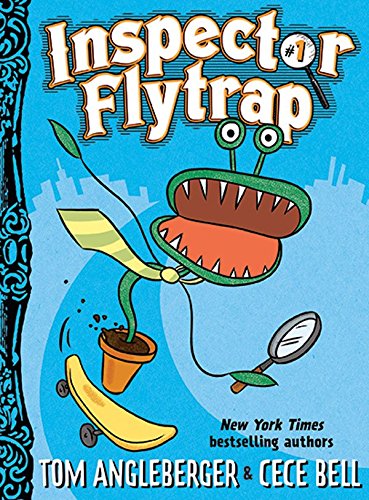 Summary:  In a literary first, a Venus flytrap with dreams of becoming a detective pairs up with a goat named Nina, who pushes Flytrap around on a skateboard and eats everything in sight.  The opening book in the series has the two of them solving three mysteries.  In the first, an art museum hires the pair to identify a mysterious orange blob on a famous painting (hint: it involves a sneeze on the part of the artist); next, they figure out how a giant stinky shoe got on top of a cookie store; finally, they solve the mystery of a missing rose, which leads to a surprise romance for both Flytrap and Nina.  All stories are generously sprinkled with Bell’s black, white, and green illustrations.  112 pages; grades 2-4.

Pros:  Quirky author Angleberger (Origami Yoda) and his Newbery honoree wife Cece Bell (El Deafo) team up for a wild, crazy, and hilarious new mystery series.  Readers will be as helpless as a bug in a Venus flytrap to resist the second installment, Inspector Flytrap in the President’s Mane is Missing, released the same day as this one.

2 thoughts on “Inspector Flytrap by Tom Angleberger and Cece Bell”