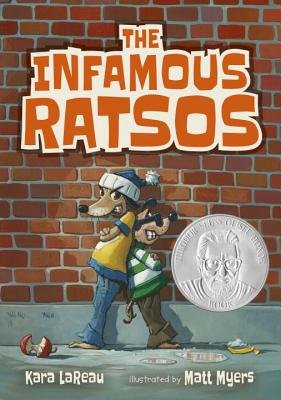 Summary:  Louie and Ralphie Ratso live with their father, Big Lou, who is one tough rat.  Their mother has been gone for a while, but they all try not to think about that.  Instead they focus on being tough.  For the boys, that means thinking up bullying schemes to torture their neighbors and classmates.  Trouble is, their plans keep backfiring to make them look like the good guys.  When they steal a hat from a boy in their class, it turns out he stole the hat to begin with.  He gets punished, while the Ratsos get praised by their teacher.  A plan to pile up snow in front of their neighbor’s store goes awry when the boys take a wrong turn and end up clearing his sidewalks.  As the final insult, the boys’ teacher sends home a note, letting their father know what upstanding citizens they are.  To their amazement, their tough-as-nails dad breaks down in tears and tells them how proud their mother would be of them.  From then on, the Ratsos go from trying to be infamous to being famous…for their good deeds.  64 pages; grades 1-4.

Pros:  What could have been a sappy, moralistic tale is actually very funny, with a lesson snuck in pretty surreptitiously.  Plenty of illustrations and large text make this a good choice for those just moving in to chapter books.

Cons:  If your young reader doesn’t get the concept of “irony” when reading about the Ratsos’ antics, you may be in for a long school year.