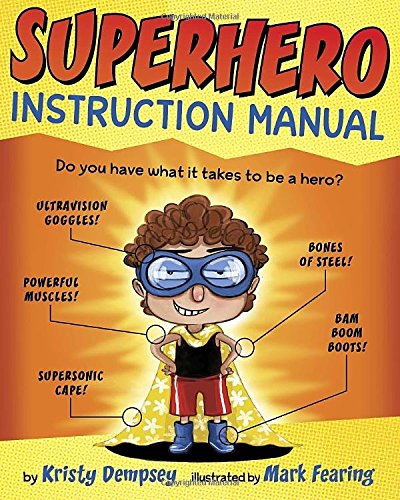 Summary:  Do you have what it takes to be a superhero?  This step-by-step manual takes a young hero-in-training through seven steps to launch his career saving the world.  While he chooses his super name, puts together a uniform, and decides on a sidekick, his sister looks on, hoping to help him, but eventually giving up and going her own (super) way.  Arriving at Step 7: Save the World, our hero goes forth to do just that.  His canine sidekick, however, has a different idea when a squirrel crosses their path.  The ensuing chase proves to be pretty much the opposite of saving the world; meanwhile, his sister is shown helping to clean up a spill, throw away trash, and fix a bike chain.  In the end, the two siblings realize that joining forces may be the quickest path to world redemption.  40 pages; grades K-3.

Pros:  A fun addition to the superhero picture book shelf.  Teachers could use this as a procedural writing mentor text.

Cons:  The ending was a little predictable.