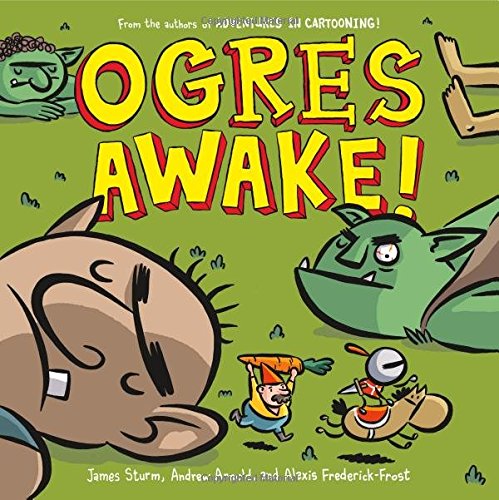 Summary:  When the knight sees ogres waking up, she rushes to the castle to warn the king.  He seems pretty unconcerned, but eventually he puts down his comic book and leads her out back where the garden gnomes are tending the vegetables.  Eventually, the knight ends up with the task of peeling and chopping an enormous pile of potatoes and carrots, which the gnomes turn into a gigantic pot of stew.  Just in time, because the ogres are now fully awake and storming the castle.  It proves to be just what the monsters need (“low blood sugar is no joke,” comments one), and the kingdom is saved…for now.  Endpapers show how to draw the knight, Edward the horse, the gnomes, and the ogres.  40 pages; ages 4-8.

Pros:  A fun graphic novel for the younger set, from the three cartoonists who brought you Adventures in Cartooning.  Looks like there will be more to come.

Cons:  At the conclusion, the knight declares, “All in all, things worked out pretty good, I suppose.”  Grammar.