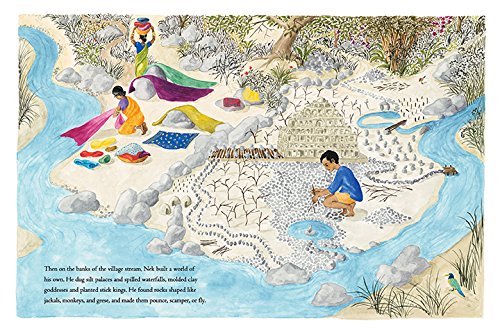 Summary:  Nek Chand grew up in a tiny village in the Punjab region of Asia, collecting stories from family members and the traveling minstrels who visited during holidays.  Those stories inspired him to create his own world from rocks, sticks, and clay.  As a young man, he was forced to leave his home in 1947 when the Punjab was divided into India and Pakistan, and those who practiced the Hindu religion had to leave Muslim Pakistan.  Nek settled in the city, but longed for his home.  He found a deserted plot of government land and created a secret kingdom from trash that he found along the roads.  He kept his creation hidden for 15 years until government officials discovered it and threatened to tear it down.  When people from the city came to see it, though, they knew it was a work of art worth saving.  They convinced the officials to preserve it, and have continued to do so following Chand’s death in 2015.  Includes an author’s note about Nek Chand and an extensive bibliography.  48 pages; grades 2-5.

Pros:  A fascinating story of an artist who worked to create his vision without much hope of ever profiting from it or even being able to share it with others.  The beautiful illustrations bring the story to life, including a foldout page with photos of the actual “secret kingdom”.

Cons:  A map of the region and additional historical information about India and Pakistan would have been useful.