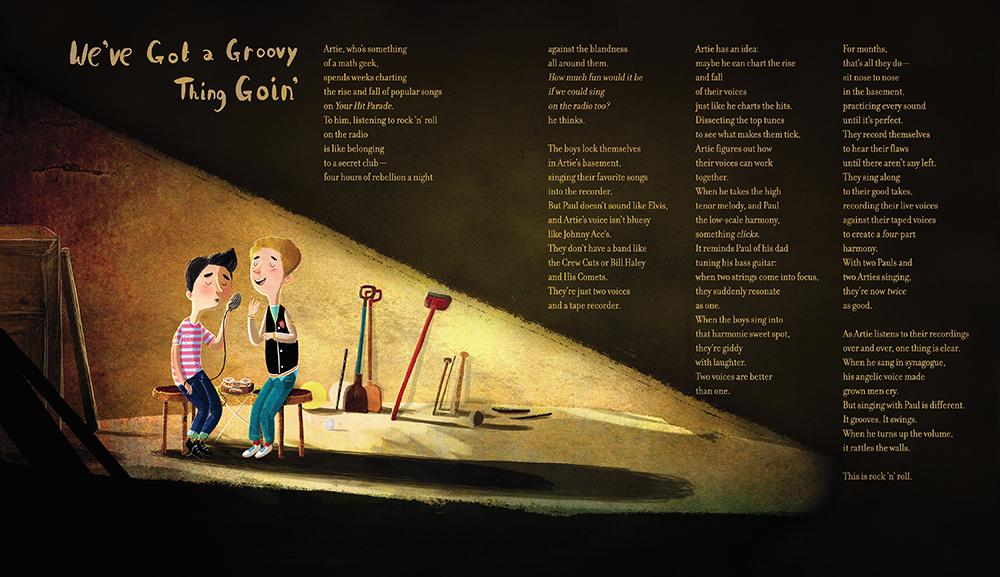 Summary:  This story of Paul Simon and Art Garfunkel begins at their Central Park concert on September 19, 1981, then travels back in time 30 years to when the two boys were growing up in 1950’s Queens.  They became friends in a sixth-grade production of Alice in Wonderland, and were inspired by Elvis and other early rockers to try harmonizing, later adding Paul on guitar. At 15, they had their first hit record as Tom and Jerry (Simon and Garfunkel was deemed to Jewish-sounding for 1950’s America), but later recordings failed to catch on.  They met up again in the early 1960’s and released another record, Wednesday Morning, 3 A.M., another flop, except that one song, “The Sound of Silence”, slowly started climbing the charts.  The book ends on New Year’s Day, 1966, when that song reached number one. Includes an afterword, discography, bibliography, and list of musical connections.  48 pages; ages 10 and up.

Pros:  An absorbing history of one of the greatest duos of the rock and roll era.  Each page is a poem titled with one of Simon and Garfunkel’s songs, beginning with “My Little Town”, describing the suburb of Queens where the two grew up.  The illustrations are occasionally goofy, as the two boys were, but really capture the changing times from the 1950’s to the 1960’s. Any fan of their music will enjoy this history and undoubtedly learn a few things as well.

Cons:  Although this looks like an elementary school purchase, it would probably be more interesting to middle schoolers and older, and definitely requires some familiarity with Simon and Garfunkel’s music to be fully appreciated.