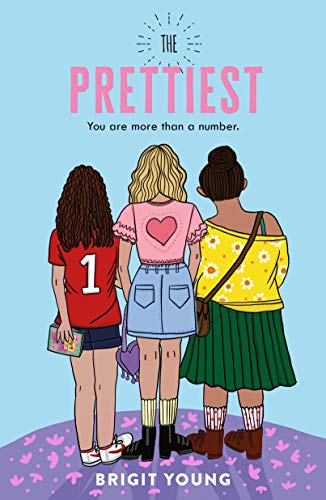 Summary:  A shock wave travels through the eighth grade when an anonymous list appears on social media ranking the top 50 prettiest girls in the class.  The story is told from alternating points of view of three characters:  Eve, a shy introvert who’s uncomfortable with her body’s sudden changes and is in the #1 spot; Eve’s best friend Nessa, a theater kid who doesn’t make the list and has been teased about her weight; and Sophie, a girl from the wrong side of town striving to be best at everything who is dismayed to be ranked #2.  Although Sophie’s never hung around with Eve and Nessa, the fallout from the list brings them together, and they plot to bring down the boy they think created the list.  Several plot twists reveal to the girls that appearances can be deceiving, especially in middle school, and that everyone, including the three of them, has something to hide.  320 pages; grades 4-7.

Pros:  This seems to be the year of the middle school sexual harassment book, and this has been one of my favorites.  Too often, stories that take place in middle school have the good kids versus the mean kids, but this showed that all kids are struggling with their identities as they enter adolescence.  The question of who created the list creates a page turner that will keep readers engaged to the very end.

Cons:  Trying not to make this a spoiler, but after learning so much about many of the characters, we never really get to know the one who actually created the list.